The Israeli government’s policy proves that the outposts are effectively settlements – only you’ll never hear them being called that.

“The outposts are not ‘hilltop youth.’ It is a carefully planned seizure of strategic points, the outposts have been coordinated with the prime minister.” – Adi Minz, former Yesha Council Chairman, 2004. 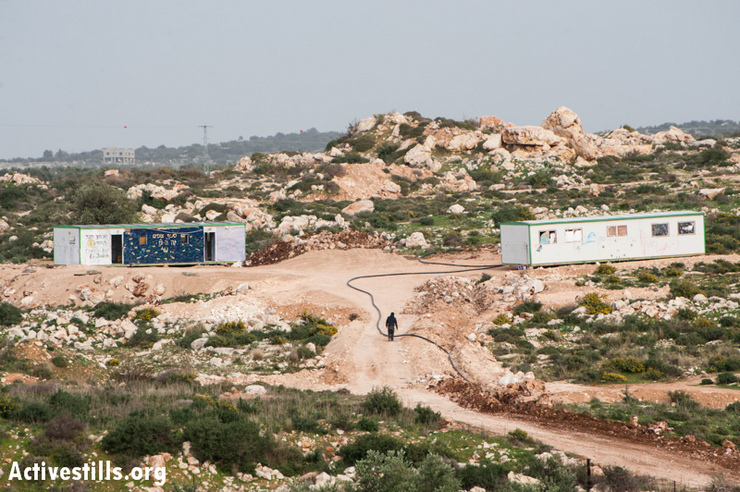 Two caravans form a new Israeli settler outpost on land belonging to the West Bank village of Jayyous, January 28, 2013. The structures were placed just one week prior, and are already being connected to water lines from the nearby settlement Zufin. The location was likely chosen to disrupt implementation of a 2009 Israeli court decision to re-route the separation barrier, returning a portion of Jayyous’s land to the other side of the fence, including the area that the outpost now occupies. (Photo by: Ryan Rodrick Beiler/Activestills.org)

Israel has not  officially created new settlements since 1996. This is an international guarantee made by the government. Creating a new settlement requires a government decision, and with three exceptions (the legalization of the outposts Bruchin and Rechalim, together with Nofei Nechemia, and Sansana in 2013), no such decision has been taken. Effectively, however, there are about 100 unofficial settlements in the West Bank. Officially, they are illegal. Officially, there are demolition orders against all the structures within these unofficial settlements. Practically, they get unceasing support from the government, without which they could not exist.

These settlements are euphemistically (and innocently) given the title of “outposts.” Their history begins two years after that government decision, when former Foreign Minister Ariel Sharon called upon the settlers to storm the hills and take them over. What you seize, we’ll keep, he told them. And thus the outpost movement was born.

In 2005, the Sasson Report on outposts was presented to the government; in its honor, Yesh Din recently published a new position paper titled, “Under the Radar.” Sasson had already identified the new settlement method at the time: the entire Israeli establishment more or less aids and abets the creation of outposts. After the land grab by Israeli civilians, the IDF promptly provides them with protection. Then, other authorities make sure water and electricity are provided. A short while after that, we have “facts on the ground,” which require legal procedures to change (procedures that can take years in the court system).

Even when it is clear that construction there is illegal, no one is put on trial – there is no single Israeli unit in charge of enforcing construction regulations in the West Bank. Recently, the High Court of Justice accepted the position of the State’s Attorney, according to which those in charge of the illegal construction of Ulpana Hill in Beit El should not be tried. The government used the stunning excuse: since it never indicted anyone for this offense, it may be that the suspects will attempt to claim “abuse of process.” If we take this logic further – and not much further – there will simply never be any point in attempting to indict someone for illegally taking over land in the West Bank. He or she will always be able to claim abuse of process.

Looking at the State’s statements in court on issue of the outposts, we see how its position has slowly changed. In 2008, the State took the position that it intends to remove many of the outposts, but that it would do so at its own pace and according to its own considerations. The State did not tell the truth; it has not removed even a single outpost without a clear order by a court. This, of course, was able to buy it some time.

In 2011 there was a change in the State’s position, when it told the courts that intends to pursue a course of partial enforcement. It would remove outposts built on private land, but will examine the possibility of legalizing those built on public land (which it prefers to call “state land” in order to create the impression that it owns them).

But this position also changed. In 2012, the government ordered the formation of the Levi Commission. (For more on that commission, see here, here and here.) It ruled that the outposts should be legalized, while rejecting the Partition Decision of 1947 and returning to the Balfour Declaration. In 2013, therefore, the State changed its position once more: it told the court that unless there is a concrete appellant who is an owner of land and can prove that the land upon which the outpost is built belongs to him, then “political considerations” take precedence over law enforcement. That is, the State, represented by the State’s Attorney – tasked with enforcing the law – is telling the court something astonishing: political will can override the acute need of any civilized state to enforce its laws; that political will can force back the old precept that “one should pray for the welfare of the realm, for without fear of it, man will eat man alive.” It should be noted that in one of his latest rulings, ordering the removal of the illegal outpost of Amona, Chief Justice Grunis ruled that in the case of illegal construction, there is no need for a concrete appellant; the very illegality of the construction requires demolition.

During 2013 and 2014, we saw another change in the state’s position: now it tells the court that while legally, the outposts mentioned in the petition ought to be removed, “special circumstances” prevent this removal.

Following the State’s behavior, we see the following deplorable pattern: historically, the government of Israel decided to mislead both the world and its own court system. The government created some 100 new settlements contrary to international law and its own obligations; it provides these settlements with every sort of aid, beginning with military protection and ending with legal cover. These days, it is trying to legalize about a quarter of the outposts – some are declared settlements, some are called “neighborhoods” inside already existing settlements.

In order to protect these settlements, it is willing to shake the foundations of the rule of law — one of the foundations of modern statehood — and it is willing to quietly ally itself with felons. Those felons, in effect, become its emissaries, the people over whom the state spreads its aegis. It promises them that it will reward them with the land they grabbed by force for the felonies they commit in its secret service.

And these, actually, are the minor offenses the State and the felons commit together. As for the more serious ones, they’ll be described in the next post.