Israelis received a new glimpse today into the lifestyle of the military elite. 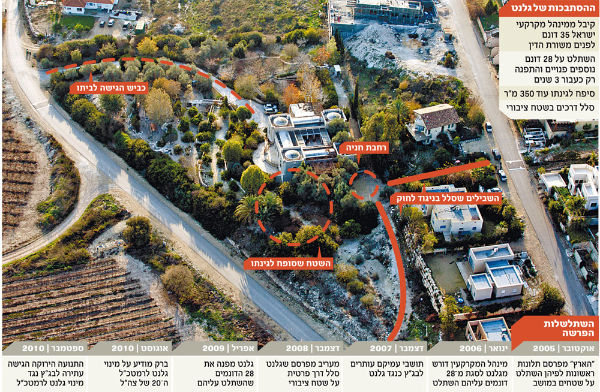 Something happened this morning that calls for breaking a tradition. It’s not a religious tradition, nor is it very old. In fact, it’s nothing but a simple design standard. Then again, design is meaningful, as we will soon discover.

I made myself a rule of elegance: to only use black and white images as illustrations from my posts. Let’s break this rule in favor of the above image, which appears in today’s Haaretz. It is an arial view of a property belonging to General Yoav Galant. General Galant, previously the commander of the IDF’s southern command, has been picked by Minister of Defense Ehud Barak to be the next IDF Chief of Staff. His term is due to begin next month.

The announcement of Galant’s appointment, made last summer, was accompanied by a curious little scandal. It involved a letter, seemingly produced by a PR company, which outlined how the Ministry of Defense was to promote Galant’s image in the eyes of the public. This document was finally accepted as forged by most and in any case that is not the scandal we are gathered here to discuss.

Currently, another controversy is surrounding this man. It involves his property. Supposedly, Galant exploited connections in the Israel Land Administration in order to annex public land to his estate. It is also claimed that he illegally paved two paths leading to his house. In an interview, Galant’s wife Claudine claimed that these paths were necessary as escape routes in case of a terrorist attack on their home.

It hasn’t been determined yet whether Galant truly is to be blamed for illegal activities, but even that is not the scandal we are gathered here to discuss. That scandal would be the house itself. Even if we assume that this house and its grounds are flawlessly legal, and that the red arrows drawn by Haaretz, resembling a battle plan, are indeed meaningless. There’s still a lot to be learned from this image.

This is Israel, not California. Houses such as Galant’s are not common here, to say the least. Even Israel’s wealthiest suburban communities, such as Kfar Shmaryahu and Herzliya Pituach, both north of Tel Aviv, are mostly made up of massive villas situated on relatively small plots of land. Galant’s house, in a moshav on the Carmel highlands, is outrageous by Israeli standards. Galant is not a businessman; he is supposed to be an army man, a public servant. What is the meaning of this?

Those familiar with local real estate realities were quick to comment. Dvorit Shargal, the country’s foremost blogger on media matters, assumed that “Prince Charles would not have been opposed to living there.” She noted that Galant’s property exceeds even its legal size by 350 square meters (nearly 4,000 square feet) on top of the 35 dunams he may have received under dubious circumstances from the ILA and the 27 dunams he rightfully owns, all this while Dvorit lives in a 40 square meter (430 square feet) apartment. “Is there justice in this world?” She asks. Why sigh, Dvorit? Your apartment’s is still bigger than mine.

Another individual endowed with a critical mind, and likely just as unable as Ms. Shargal and myself to cope with Israel’s outrageous real estate costs (a prime reason for the diminishing of the country’s middle class), is artist Barak Ravitz. He wondered online today whether Galant’s chateau “is in itself the Iranian threat.”

This joke is self explanatory to consumers of Israeli media. We have become accustomed to aerial photos of domed structures: those of Iranian nuclear reactors under construction, but Ravitz may also be alluding to the house’s four domes and arched cloisters, evocative of Persian architecture. He later wrote: “I heard that this villa was originally built as training grounds for the secret operation of assassinating Ali Baba”.

Personally, I think of Galant’s house as an embodiment of the Israeli threat, rather than the Iranian. Galant was picked by Ehud Barak, until this week the leader of Israel’s “Labor Party,’ who lives a life completely disconnected from any value of any true labor movement. Barak recently traded his enormous luxury apartment in Tel-Aviv’s Akirov Towers for a similar one in another sureal-ly lavish complex.

Ben-Gurion may have gone to live in a desert cottage, but that was then and this is now. My Zionist grandfather taught me to view modesty as the greatest virtue, but that was then and this is now. In our age the country and the IDF are run by tasteless nouveaux-riches moguls, whose source of income tends to be somewhat mysterious. What values are reflected by their design choices? By their investments? Is it really only a coincidence that they are blamed for building on land that is not their own?

Galant may not be Ceaucescu and Claudine isn’t Imelda Marcos, but the sight of their house leaves no room for doubt: Our next chief of staff is a member of the new aristocracy, the top of the current feudal structure. It is indeed he who will soon be directly in charge of the fate of those at the very bottom of it: the children of Gaza.