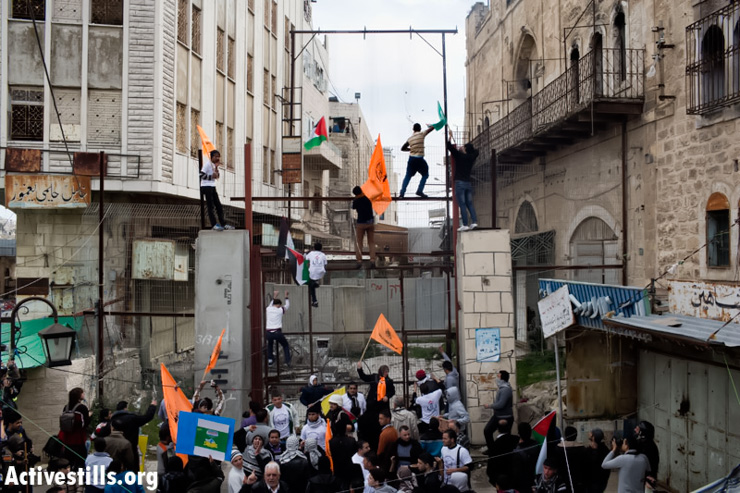 During a protest against the continued closure of Shuhada Street to Palestinians, demonstrators climb a fence, bulit by the Israeli army in the West Bank city of Hebron February 22, 2013. Hundreds of demonstrators, including foreign and Israeli activists, gathered to mark the 19th anniversary of the closure of the street by the Israeli army in 1994 following the massacre by Baruch Goldstein, an Israeli settler, who went on a rampage inside Al Ibrahimi Mosque, killing 29 Palestinian worshipers. (Photo by: Oren Ziv/Activestills.org)

On the Friday before last, Palestinian protestors accompanied by Israeli and international solidarity activists wanted to mark “Open Shuhada Street Day” in Hebron. Shuhada Street has been closed to Palestinians since the Baruch Goldstein massacre in 1994, including residents who live on the street and have to climb onto their rooftops to adjacent streets in order to leave their houses. Meanwhile, settlers living in the area come and go freely. Shuhada Street, which used to be the market place of Hebron, has turned into a “ghost street,” with a checkpoint at its entrance.

On that Friday we gathered by the street’s entrance. Palestinian youth hung flags and signs on the checkpoints and the drums beat loudly with slogans against the injustice, on the street, which above all else is the embodiment of apartheid. But the Palestinian residents, who are punished with the closure of their street for a massacre committed against them, whose private and public space is torn from them, have no right of protest under the laws of the occupying army. The protest chants were drowned out by the explosions of stun grenades and whistles of tear gas canister. The smells of the market were overwhelmed by the stench of skunk water. I had planned to write a proper post about this demonstration, with accurate reporting from the ground, but it is hard to maintain accuracy when the protest spreads all over town. It is hard to remain organized when your head echoes with explosions and your heart beats rapidly from running and fear. And I gave up.

And then I saw these photos. Taken by Activestills, they show Baruch Marzel and Itamar Ben Gvir – the first wearing a Kahanist T-shirt, the later in mock Palestinian prisoners uniforms – marching in the heart of Shuhada Street; the same street in which the Palestinian protesters were prevented from entering, heavily guarded by Israeli security forces, the same forces which dispersed with tear gas and rubber bullets the Palestinian demonstration, marking the anniversary of the Goldstein massacre, the same massacre for which the Palestinians are continually punished. So I decided that something must be said, even if nothing more than a summary.

I conclude with the Facebook status I published upon my return from the demonstration that day, which still feels most appropriate:

At the end the of the day I’m angry. I’m angry with the Israeli soldiers, and with the PA collaborators. I’m angry with the international community that remains silent. I’m angry at the occupation and apartheid, and the checkpoint blocking a street in which people have homes and families and lives. I’m angry with the Israeli media, according to which “things are calm now,” which means that apartheid is back in order and the resistance has subsided for the day. I’m angry because I’m now back home, safe and sound. But when I left there was still tear gas in the air and the explosions of the sound bombs were still echoing in the streets of Hebron. I’m angry because no one should live like this and still people do, and because for the people of Hebron, for those who live in Shuhada Street, things are “back to normal” now. There is nothing normal about the way things are. I’m angry and sad, and as we sit down for dinner, I go and to wash my hands and my face, and some teargas leftovers leak into my eye. It stings and burns, and the tears are bitter with the taste of tear gas, and with the taste of rage.