‘The Bedouin will not live on his land with his flock, but rather will be part of the urban class that comes  in the afternoon and puts on his slippers,’ Moshe Dayan said in 1963. In the 50 years since, not much has changed regarding Israel’s efforts to justify its policy in the Negev: as many Arabs as possible on as little land as possible and as few Jews as possible on as much land as possible.

By Avner Ben-Amos (Translated from Hebrew by Mairav Zonszein) 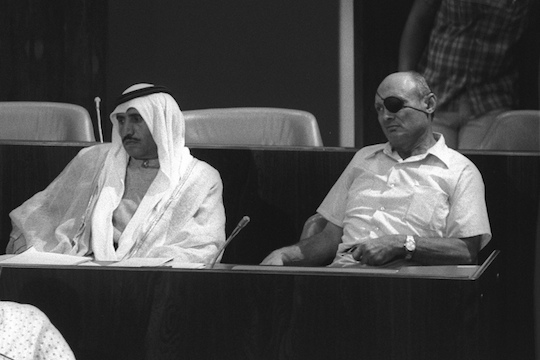 Two quotes in the same newspaper, excerpts from interviews with two former military figures, 50 years apart. Both discuss the Bedouin in the Negev, and from both we can learn about the deeply ingrained relationship of the State of Israel to the most disenfranchised population in its territory. One is an interview with Moshe Dayan, former chief of staff, who became agriculture minister in Ben-Gurion’s government in 1959. The other is an interview with Doron Almog, a former chief officer of the Southern Command, who became head of the implementation team for resettling the Bedouin (the Prawer-Begin plan) in 2011, in Netanyahu’s government.

The Bedouin must become urban laborers – in industry, service, construction and agriculture. Eighty-eight percent of Israel’s residents are not farmers. The Bedouin will become part of that majority. While it is a sharp transition, it means the Bedouin will not live on his land with his flock, but rather will be part of the urban class that comes in the afternoon and puts on his slippers. His children will become accustomed to a father who wears pants, who doesn’t carry around a dagger nor is pulling lice out in public. They will go to school with their hair combed and parted. It will be a revolution, but it can be done over two generations. Not forcefully, but directed by the government. The reality known as ‘Bedouin’ will disappear.

This is a very sensitive stage,” said Almog. “The Bedouin opponents [to the Prawer-Begin Plan – A. B.-A.] believe that every tin shed must be defended, not to preserve the Bedouin society, but rather to create territorial contiguity between Hebron and the Gaza Strip.

These are seemingly two totally distinct issues. One, which Dayan talks about (let us ignore for a moment his blatant Orientalist approach), is advancing the Bedouin residents by converting them from farmers to the urban proletariat. The other, which Almog talks about, is the “security threat” posed by contiguous territory the Bedouin want to create together with the Palestinians of the south Hebron Hills in the West Bank. But in fact, these are two aspects of the same policy, designed to realize a very basic formula: on the one hand, as many Arabs as possible on as little land as possible; on the other hand, as few Jews as possible on as much land as possible. The Negev is one of the areas in which this policy is most clearly apparent.

Dayan was addressing those Bedouin who were forcibly displaced in the 1950s to the Sayag area, in the triangle between Beer Sheva, Yerucham and Arad, where they set up temporary agricultural settlements. Once Israeli martial law ended in 1966, the state began promoting Dayan’s ideas, by establishing Tel Sheva as a township. Until the end of the 1980s, another six townships in the same area were established, where the Bedouin were meant to concentrate and forget about their agricultural past. However, about half of the Bedouin population chose not to move to these neglected townships, preferring to remain where they were and continue conducting their lives according to their traditions; despite the fact that the lands they were living on were declared by the state in 1965 to be agricultural lands, which prevented the villages from being recognized and receiving services. This Bedouin population, today around 80,000 people, is the Prawer Plan’s target community. “The bill to arrange Bedouin settlement in the Negev” is essentially the second phase in Israel’s plan to concentrate the Bedouin into as minuscule a territory as possible.

While Jewish towns and villages are spread out across the Negev, the Prawer-Begin plan limits Bedouin settlement to specific areas within the former Sayag, prohibiting it entirely in the western Negev (west of Highway 40), except for two tiny enclaves. While the isolated Jewish farms that are lightly populated retroactively received approvals in 2010, the Prawer-Begin plan demands the Bedouin villages to meet minimal population capacity requirements.

I have no idea whether Almog really believes the Bedouin are trying to create territorial contiguity between Hebron and Gaza, but I hope he understands it is an unconvincing excuse. Umm al-Hiran, for example, which creates a certain “contiguity” with the south Hebron Hills, and which is supposed to be evacuated and replaced by a national-religious Jewish settlement, was put there by the state in 1956.

The government’s consistent policy regarding the Bedouin is also evident from the body overseeing it: the Israel Defense Forces. Until 1966, the Bedouin were under marital law, which controlled all aspects of their lives. After that, because they were seen as a “security threat,” the military continued to indirectly control their lives. A quick look at those involved in the planning and implementation of the Prawer-Begin plan reveals khaki fatigues underneath civilian clothing: Colonel (res.) Ehud Prawer, who began drafting the plan back in 2006 while serving as deputy head of the National Security Council; Maj.-Gen. (res.) Yaakov Amidror, who examined the Prawer Plan as head of the National Security Council and is responsible for making it “less generous” to the Bedouin; Lt.-Col. (res.) and retired police Commander Yehuda Bachar, who heads the authority for arranging the Bedouin settlement in the Negev; and of course, Maj.-Gen. (res.) Doron Almog. Maybe we shouldn’t be surprised. As Amiram Oren and Rafi Regev point out in their book A Land in Khaki: Land and Security in Israel, the IDF directly and indirectly controls half the lands of the State of Israel. This of course applies to the Bedouin as well, who are subject to its authority.