The term ‘diplomatic horizon,’ a catch-phrase among Israeli politicians and the media, points to the need to offer a viable diplomatic plan together with military efforts against Palestinian violence. But can it offer Palestinians a real vision for their longing for statehood?

Israeli political jargon occasionally invents “laundered” terms designed to create an illusion of a reality that does not exist. Such is the concept of the “diplomatic horizon,” which has become popular among politicians and the media. Even Prime Minister Benjamin Netanyahu, during Operation Protective Edge, said on August 20 that “dramatic changes in the region promise a new political horizon.” What is this political/diplomatic horizon that has become such a catch-phrase?

It is difficult to trace the term’s origin. Haaretz’s archive, which provides statistical testing from only as far back as late 2001, reveals that since then the phrase has appeared hundreds of times in the paper, and in various political contexts.

In an editorial dated May 5, 2002 – during Operation Defensive Shield, at the height of the Second Intifada – and titled “Diplomatic Action Plan,” we learn that “in the past year the term ‘diplomatic horizon’ has taken root as an expression used commonly to describe the need to accompany military efforts against Palestinian violence with a viable diplomatic plan. Behind this phrase lies the recognition for the need to present the Palestinians with a vision – a goal – that can answer their longing for statehood. Such an initiative has been absent until the present from the stockpile of the Prime Minister’s [Ariel Sharon] ideas.” It is therefore reasonable to assume that the disappearance of the policy option – the failure of the Camp David talks (July 2000), the Clinton Parameters (December 2000), the Taba talks (January 2001) and the onset of the Second Intifada – has generated the need for a glimmer of hope in the form of a “diplomatic horizon.” 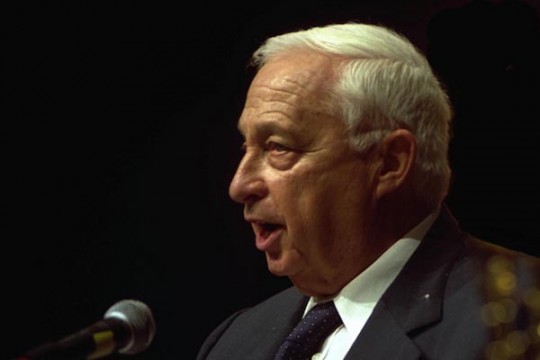 In general, the term was employed in the past by media pundits and politicians who identified as left-of-center. For instance, Joel Marcus and Aluf Benn in Haaretz once criticized the Sharon government for its lack of a diplomatic horizon in its policies. Shimon Peres, as the foreign minister in the Sharon government, and Tzipi Livni, then the foreign minister in the Olmert administration, both bemoaned the lack of a diplomatic horizon for the Palestinians. Livni even talked about the importance of creating an “economic horizon” for them. Even Ehud Olmert was once quoted as saying, “the Palestinian government is not able to be sustained for long without a diplomatic horizon.” Of particular interest was a letter from a group of reserve paratroopers returning from duty after Operation Defensive Shield addressed to Sharon in May 2002 that complained that his government “has neither leadership nor a diplomatic horizon.”

With this understanding, when Netanyahu used the term “diplomatic horizon” he was actually appropriating a term from the lexicon of the Left, albeit in its broadest usage.  Ostensibly, this should come as good news, since if Netanyahu is drawing from the ideological discourse of the Left, perhaps it signifies a change in his views. However, this is also what was said of him after a speech at Bar-Ilan University five years ago on support for a two-state solution. Yet, in all likelihood, Netanyahu understands the positive winds the term elicits in the media, raising some hope for the future. However, only a few days after his use of the term for the first time, he told journalists that “the diplomatic horizon can wait.” Thus, Netanyahu’s diplomatic horizon became something of a chimera.

The term “diplomatic horizon” is one that says a lot about nothing. It raises hopes for the future while allowing those who speak about it to do nothing concrete here and now. The term is meant to throw sand in one’s eyes, to create a mirage. It is somewhat reminiscent of the “light at the end of the tunnel” – an expression that, incidentally, has likely lost its positive connotation in the wake of the recent operation to destroy Hamas’ tunnels.

The term is probably meaningless to the other side of the conflict. Twenty years after the signing of the Oslo Accords, the Palestinians are not interested in a “diplomatic horizon,” but rather a significant change – both political and economic – in their lives here and now.  Too many generations of frustration, despair and disappointment have caused them to lose faith in the future; the question is what to do in the present. As it turns out, there is little that is being offered to them.

What we and the Palestinians need is leadership with a vision, leaders that see the dangers of the demographic trends that would lead to a one-state solution, and are ready to adopt policies aimed at creating a new reality, here and now, even if it requires taking some risks. “Where there is no vision, the people perish,” a passage in the Book of Proverbs reads. To this David Ben Gurion added in 1964, for “a vision is the secret of our existence, the secret of our being.” Is there a horizon for this vision?

Professor Podeh teaches in the Department of Islam and Middle Eastern Studies at the Hebrew University of Jerusalem. He is a board member at Mitvim – The Israeli Institute for Regional Foreign Policies. A Hebrew version of this article first appeared in Haaretz.

Related:
Israel’s watershed moment that wasn’t
One- or two-state solution? The answer is both (or neither)
This is Netanyahu’s final status solution