Palestinians mark Land Day across Israel and the West Bank, politics take center stage in Israel, laid off workers take to the streets, a number of social and political struggles intensify, Gaza struggles to recover from last summer’s devastating war, and Palestinians and Israelis continue popular resistance against the occupation. 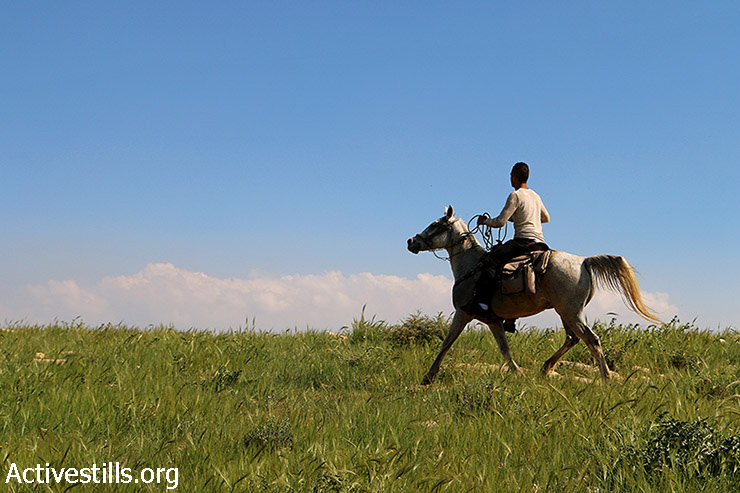 A Palestinian rides his horse in Area C in the northern Jordan Valley, West Ban, March 13, 2015. Israeli media recently reported that Israel plans to build another wall on the West Bank border with Jordan. The plan was revealed following the completion of a similar fence on the border with Egypt. Work on the wall is expected to begin in the summer of 2016. 88% of Jordan Valley lands is considered Area C, which is under full Israeli control. There are 27 Israeli settlements in Jordan Valley, which comprises 28% of the West Bank. (photo: Activestills.org) 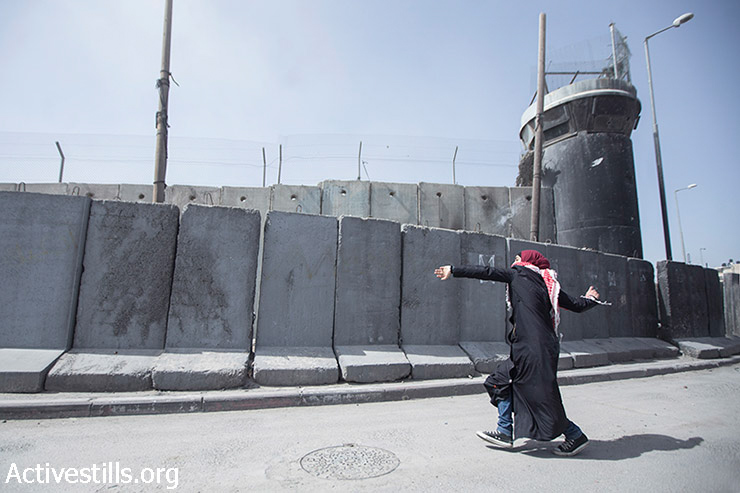 A Palestinian woman throws stones during a protest against the occupation a day before International Women’s Day at the military checkpoint, Qalandiya, West Bank, March 7, 2015. (photo: Activestills.org) 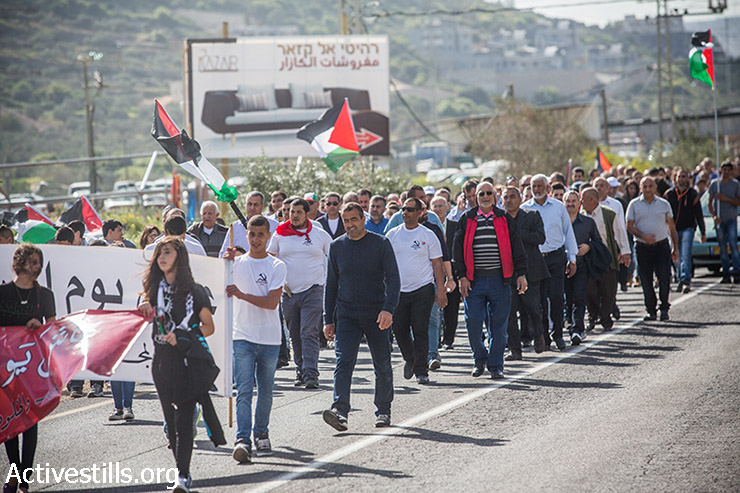 Thousands of people participated in a march commemorating Land Day in the village of Deir Hana in northern Israel, March 30, 2015.
Land Day is held every year to mark the deaths of six Palestinians protesters at the hands of Israeli police and troops during mass demonstrations on March 30, 1976, against plans to confiscate Arab land in Galilee. (photo: Activestills.org) 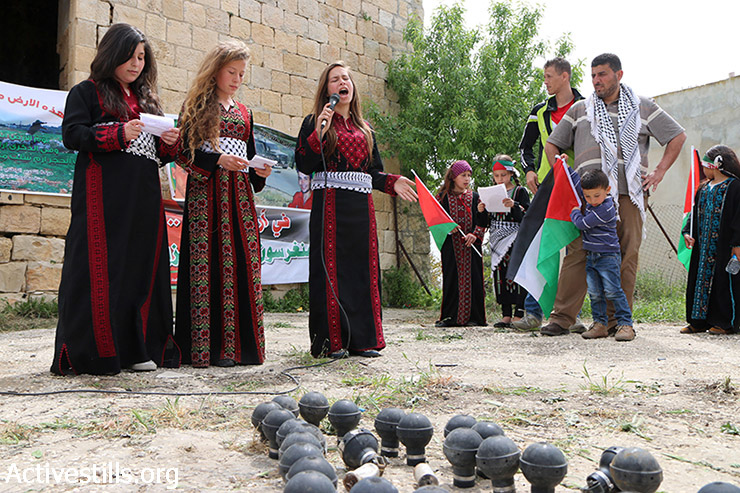 Palestinian children sing during a demonstration marking Land Day in Nabi Saleh village, West Bank, March 28, 2015. Land Day is held every year to mark the deaths of six Palestinians protesters at the hands of Israeli police and troops during mass demonstrations on March 30, 1976, against plans to confiscate Arab land in Galilee. (photo: Activestills.org) 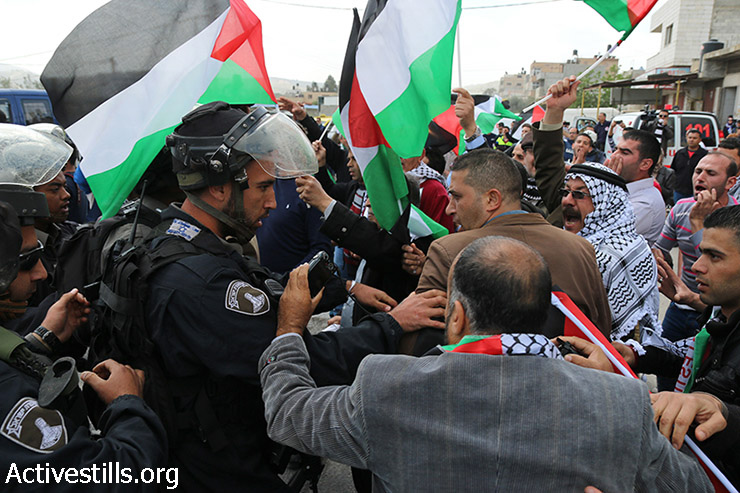 Palestinians demonstrate to mark Land Day in Huwwara village, West Bank, March 30, 2015. At least 15 participants were wounded in clashes. Land Day is held every year to mark the deaths of six Palestinian protesters at the hands of Israeli police and troops during mass demonstrations on March 30, 1976, against plans to confiscate Arab land in Galilee. (photo: Activestills.org) 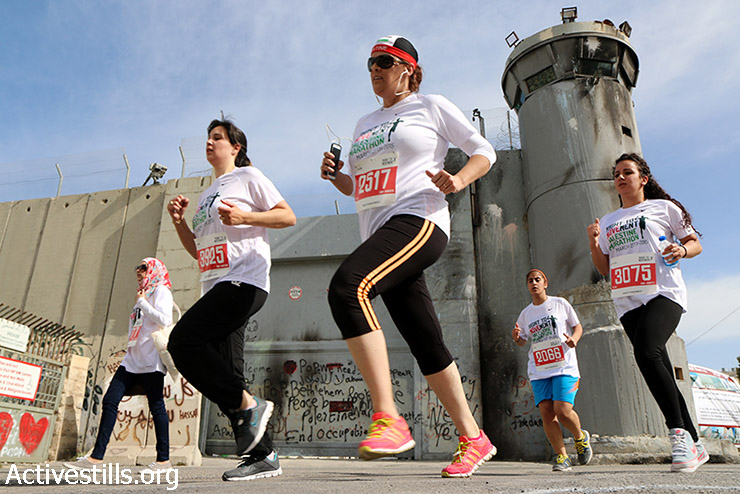 Runners race along the Israeli separation wall dividing the West Bank city of Bethlehem in the third annual Palestine Marathon, March 27, 2015. Some 3,200 Palestinian and international runners participated in 10K, half marathon and full marathon races under the title “Right to Movement”. Full marathon runners had to complete two laps of the same route, as organizers were unable to find a single course of 42 uninterrupted kilometers under Palestinian Authority control in the area. (photo: Activestills.org) 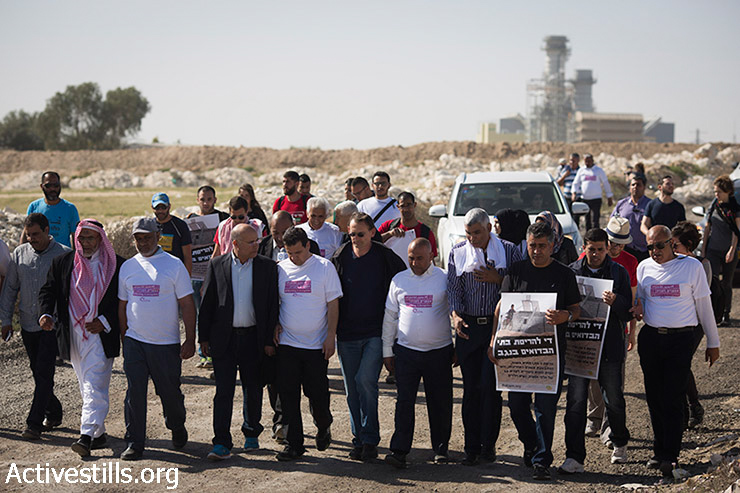 Members of Knesset, Bedouin and activists march on the road leading from the unrecognized village of Wadi al Na’am to the city of Beer Sheva during a four-day march to Jerusalem calling for the recognition of 46 Bedouin villages in the Negev, Israel, March 26, 2015. (photo: Activestills.org) 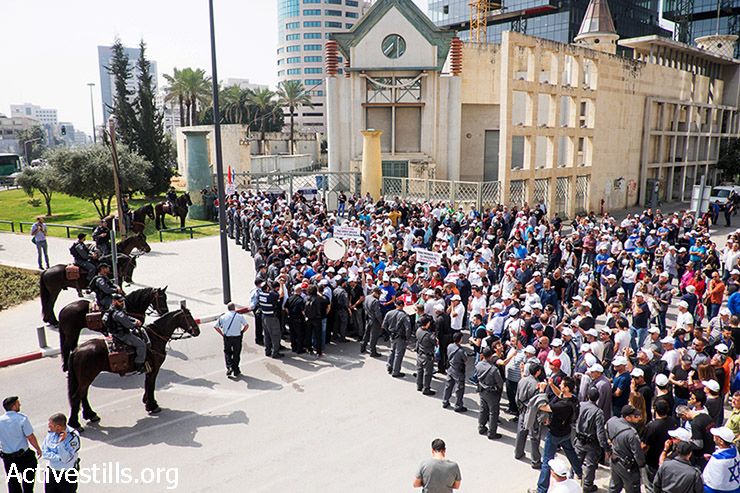 Israeli workers confront police during a protest against the plan to dismiss hundreds of workers employed in a factory of the CIL group, in front of the company’s offices in Tel Aviv on March 10, 2015. (photo: Activestills.org) 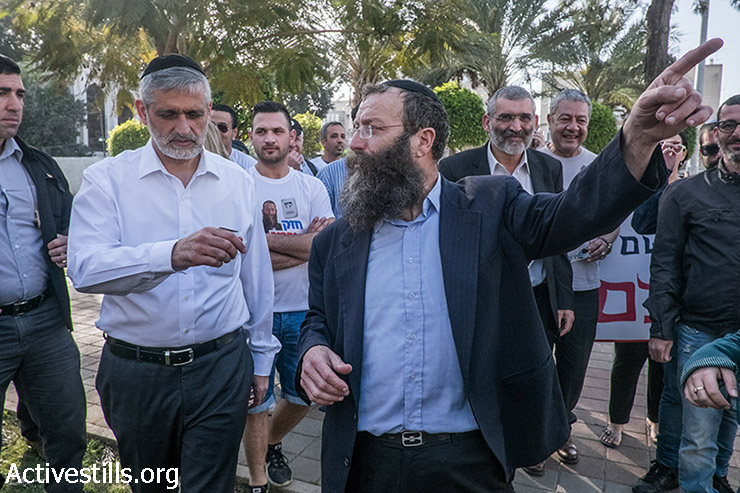 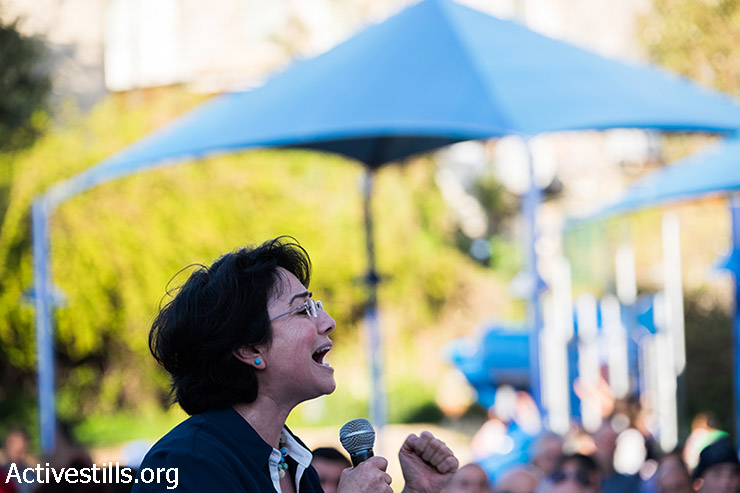 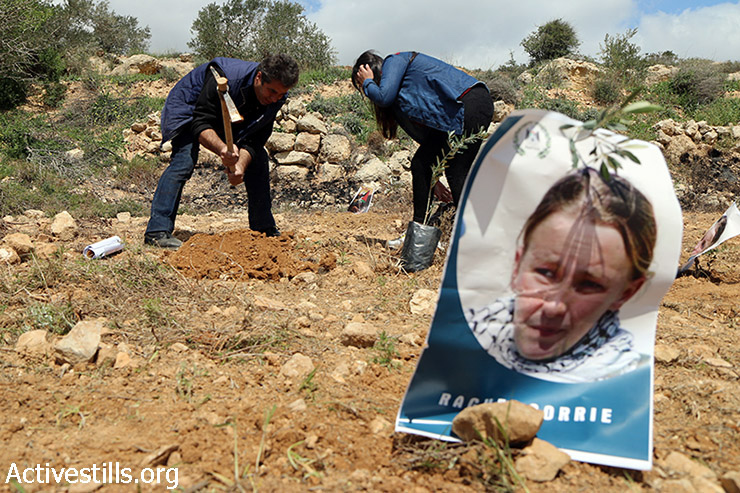 Palestinian activists plant olive trees and hang Rachel Corrie’s photo during an olive tree planting activity commemorating her death, Qariyut, West Bank, March 15, 2015. Corrie was an American activist who was crushed to death by an Israeli military bulldozer in 2003, as she tried to block the demolition of a Palestinian home in Rafah area, Gaza Strip. Two Palestinians were arrested during the activity by Israeli forces. (photo: Activestills.org) 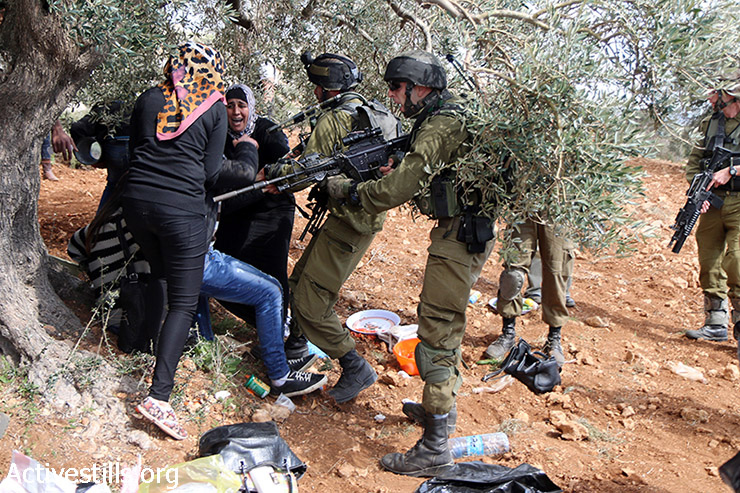 Israeli soldiers attack Palestinians during an olive tree planting activity commemorating Rachel Corrie’s death, Qariyut, West Bank, March 15, 2015. Corrie was an American activist who was crushed to death by an Israeli military bulldozer in 2003, as she tried to block the demolition of a Palestinian home in Rafah area, Gaza Strip. Two Palestinians were arrested during the activity by Israeli forces. (photo: Activestills.org) 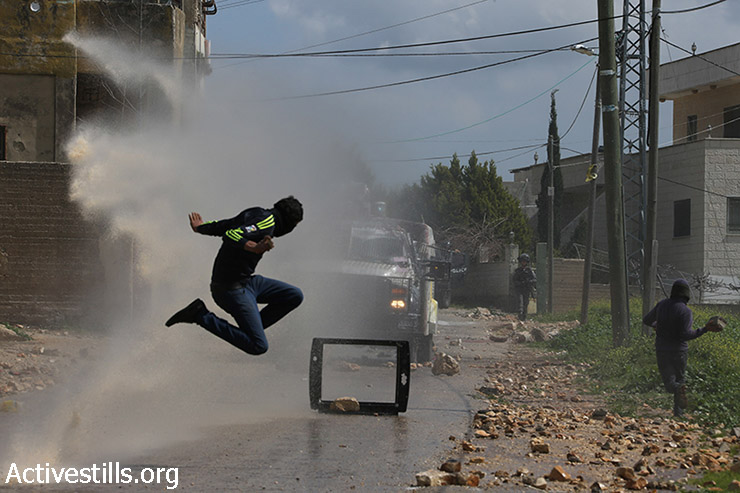 A Palestinian youth jumps to avoid a water canon during clashes with the Israeli army at the weekly protest against the occupation, Kafr Qaddum, West Bank, March 13, 2015. Locals began to organize demonstrations in July 2011 to protest the blocking of the main road linking Kafr Qaddum to Nablus. (photo: Activestills.org) 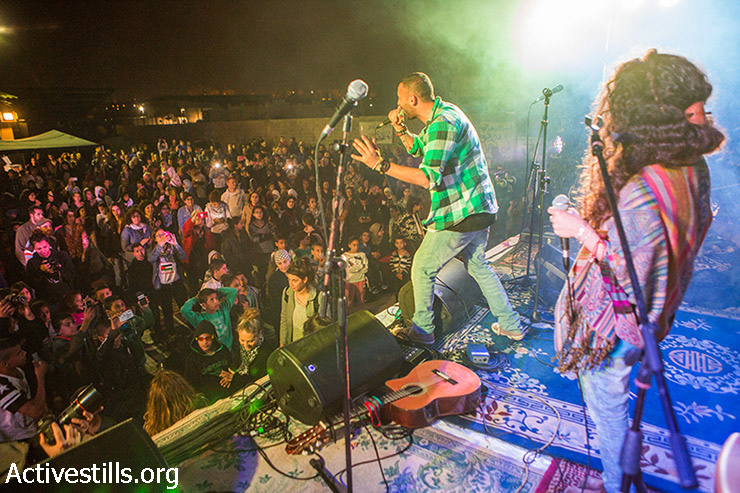 Rapper Tamer Nafar, of the music group DAM, sings during an event calling for the recognition of Dahmash village, March 14, 2015. Dahmash is the only unrecognized village in the center of Israel, located between Lod and Ramle and populated by Palestinians and Bedouin. The event was held two days before a hearing in the case at the High Court of Justice. In the last decade the village has been fighting a long legal battle for recognition. Until now, the residents and supporting activists have managed to prevent house demolitions in the village. (photo: Activestills.org) 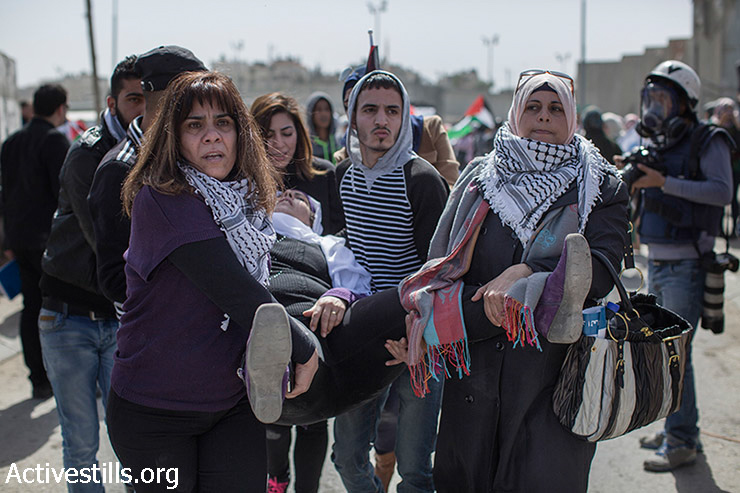 A Palestinian woman is carried away after she was injured during a demonstration against the occupation one day before International Women’s Day, in front of Qalandiya checkpoint, West Bank, March 7, 2015. The annual march was repressed by the Israeli army. (photo: Activestills.org) 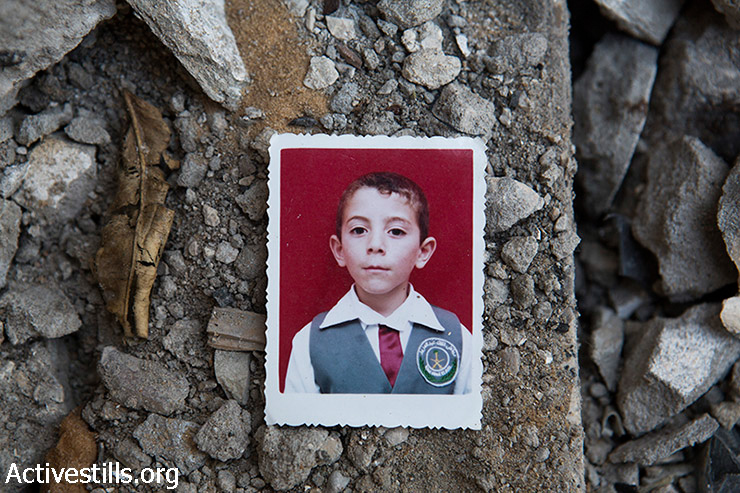 A photo of Abdallah Abdel Hadi Al Majdalawi lies amid the ruins of his home, Gaza Strip, March 19, 2015. Abdallah (13) was killed alongside his brother Abdelrazek (19) and his cousins Rawan (9) and Mahmoud (8), by an Israeli attack which occured without prior warning on August 3, 2014. The attack destroyed also the adjacent home of Ahmed Al Majdalawi. (photo: Activestills.org) 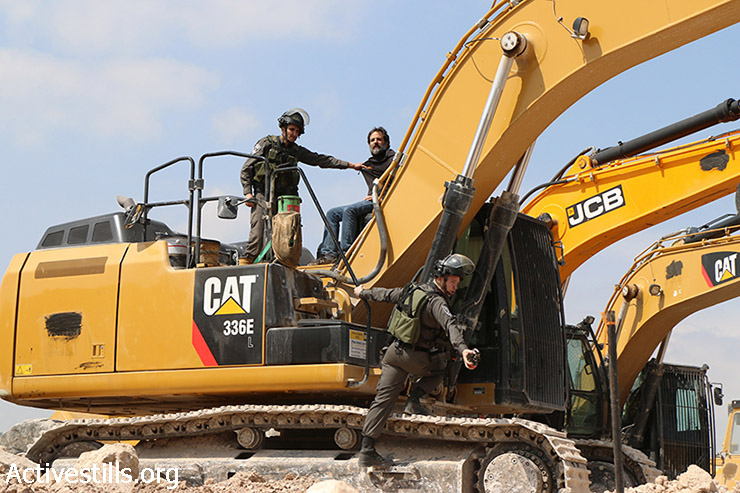 An Israeli soldier arrests an Israeli activist atop a Caterpillar digging machine during a protest against Israeli plans to annex parts of the E1 area of the West Bank to the Jerusalem district behind the Separation Wall, Eizariya, West Bank, March 17, 2015. Over 15,000 Palestinians live in 45 communities in what Israel calls the “E1” area. (photo: Activestills.org) 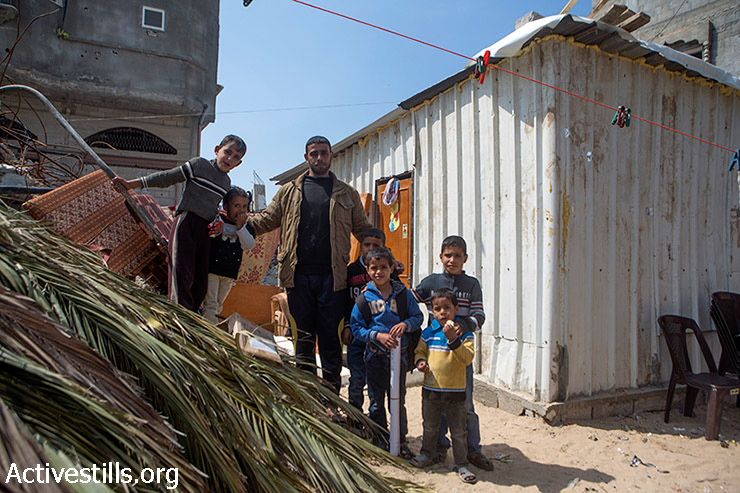 Suleiman Abu Darouj and his children stand near their temporary shelter where they now live in Zawaydeh village, Gaza Strip, March 17, 2015. Five members of the family, incluing two children, were killed during the 2014 Israeli offensive. The family lives in a one-room shelter located near the ruins of their former home. (photo: Activestills.org) 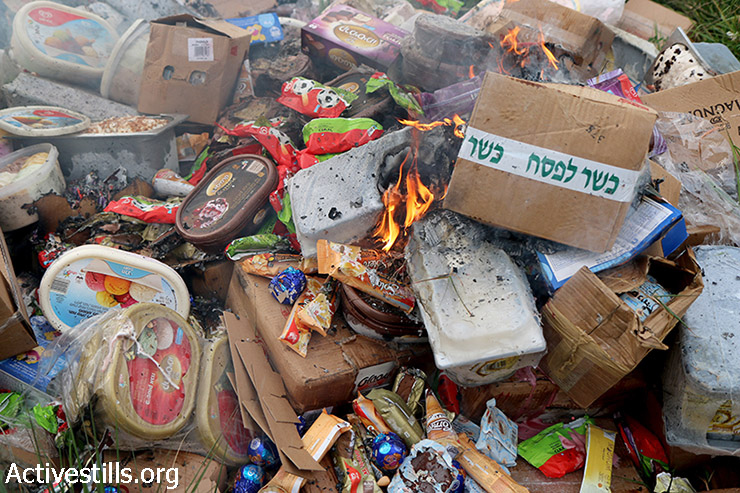 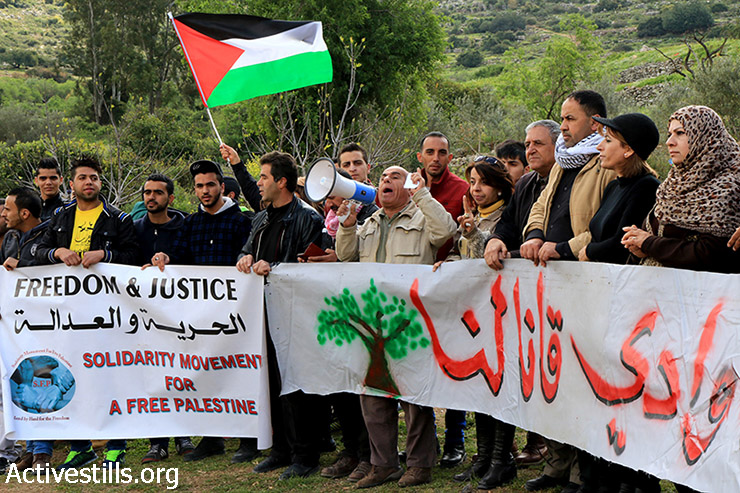 Palestinian and international activists hold a sign that reads, “Wadi Qana is for us”, during a solidarity activity with Palestinian farmers in the area, West Bank, March 20, 2015. On Sunday March 15, Palestinians received an Israeli military order to uproot 123 olive trees in Wadi Qana, which is surrounded by seven settlements. If the Israeli Separation Wall is built as planned, the land of Wadi Qana will be confiscated on the “Israeli” side. (photo: Activestills.org) 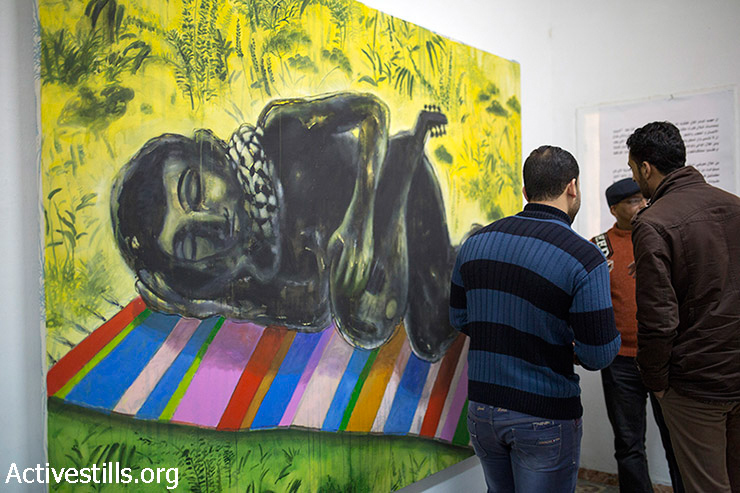 Opening of the exhibition “Simple Dreams” by Gaza artist Raed Issa in the Eltiqua Gallery in Gaza City, March 23, 2015. The exhibit included some of his destroyed paintings that he recovered from the ruins of his home which was destroyed by an Israeli attack last summer. Raed lost many paintings and art materials. (photo: Activestills.org) 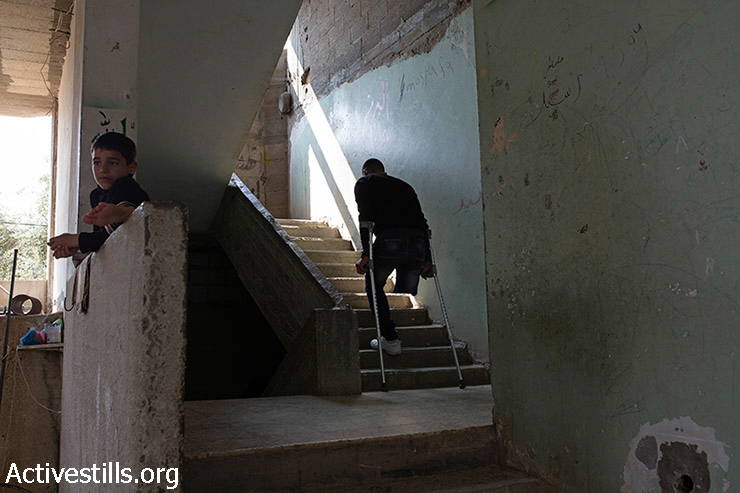 Wael al-Namlah, 26, climbs the stairs in his home in Rafah, Gaza Strip, March 18, 2015. Members of the al-Namlah family were fleeing Israeli attacks on August 1, when they were targeted by two missiles some 600 meters from their home. Three members of the family were killed: Youssef (Wael’s brother), his wife Wala, and 11-year-old Angham (Wael’s sister). Wael was injured alongside his wife, Israa, who lost her legs and their three-year-old son Shereef, who lost the lower part of his left leg. Six months after the 2014 Israeli offensive on Gaza, 100,000 Palestinians are still displaced. (photo: Activestills.org) 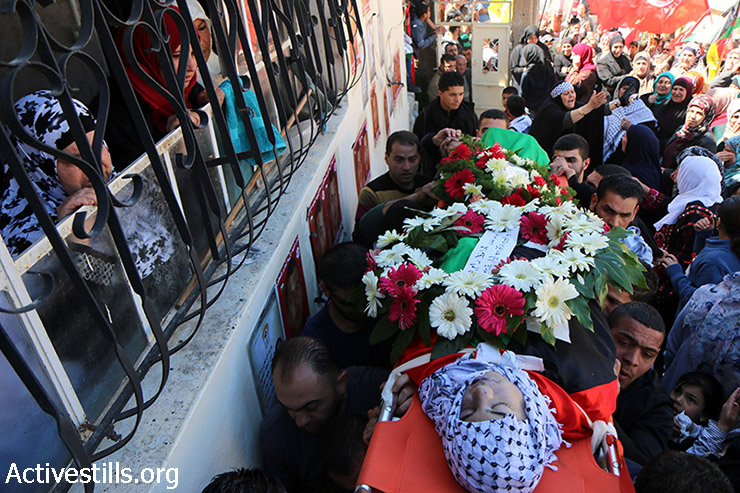 Palestinians carry the body of Ali Safi, Jalazun Refugee Camp, West Bank, March 26, 2015. Safi, 20 years of age, was shot with live ammunition by Israeli forces during clashes near the refugee camp on March 18. He was taken to a Ramallah hospital where he died on March 25. According to the Palestinian news agency Ma’an, the clashes erupted last week after a protest in opposition to the construction of a wall between the nearby Israeli settlement of Bet El and the refugee camp. (photo: Activestills.org) 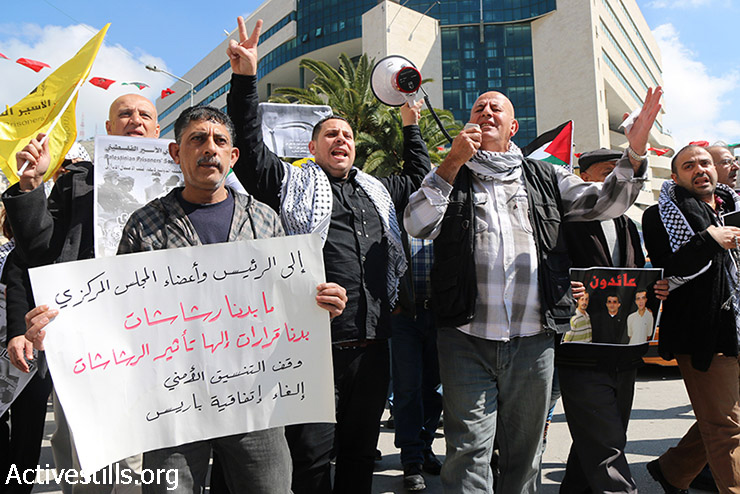 Protesters march in solidarity with Palestinians in Israeli prisons, Nablus, West Bank, March 5, 2015. On March 4, many media outlets reported that Palestinian prisoner Ibrahim Jamal lost his sight and ability to speak after hitting his head on the end of an iron bed in Eshel Prison. As prisoners’ conditions in Israeli prisons worsen, outrage is rising among prisoners who are calling for widespread protests. Palestinian prisoners say they are the target of Israeli officers and that sick inmates are facing a slow death, requiring immediate help. (photo: Activestills.org) 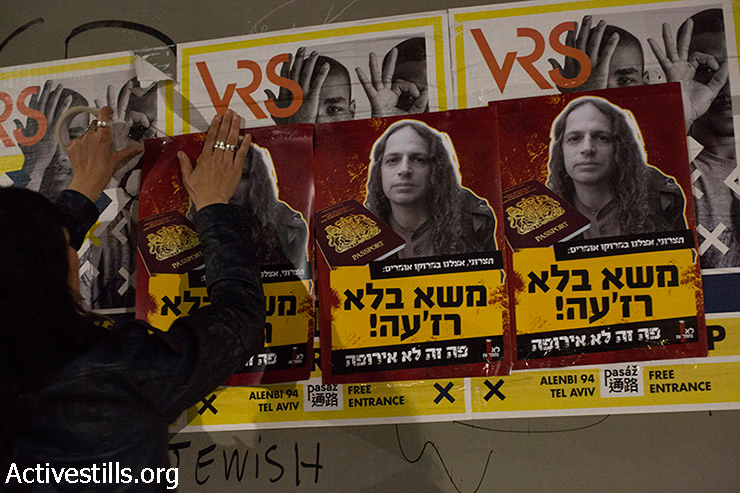 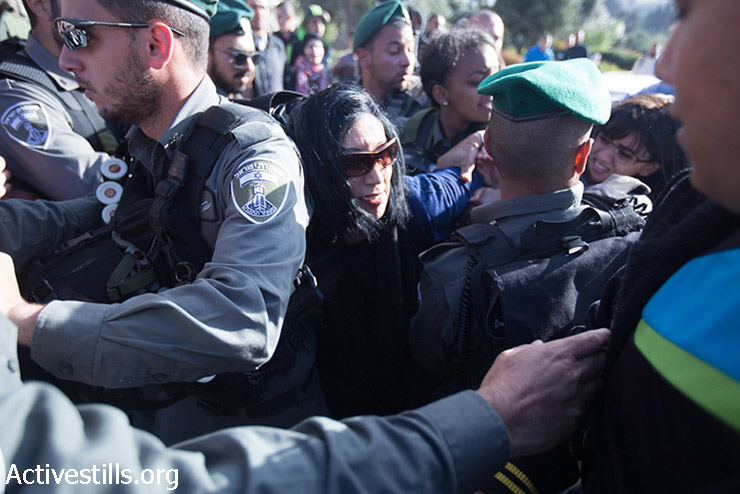 Land Day demonstration at Damascus Gate in the Old City of Jerusalem, March 30, 2015. Protestors started a march that was disperse by Israeli police. Four were arrested. (photo: Activestills.org) 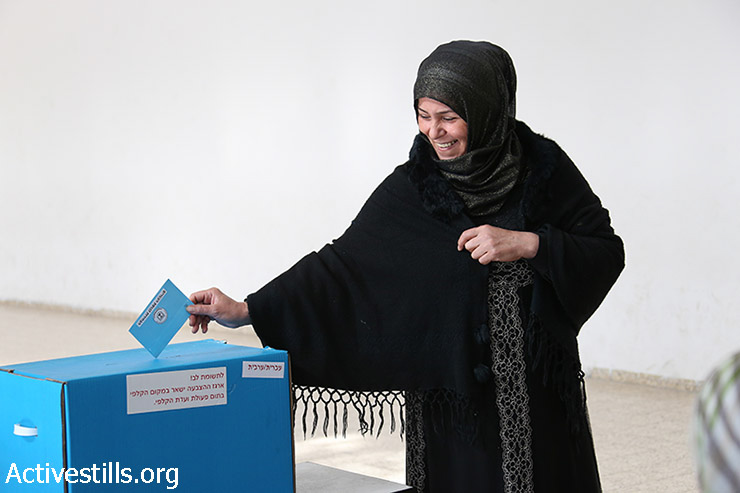 A Palestinian woman votes in a polling station in the city of Umm al Fahem, during the general elections in Israel, March 17, 2015.(photo: Activestills.org) 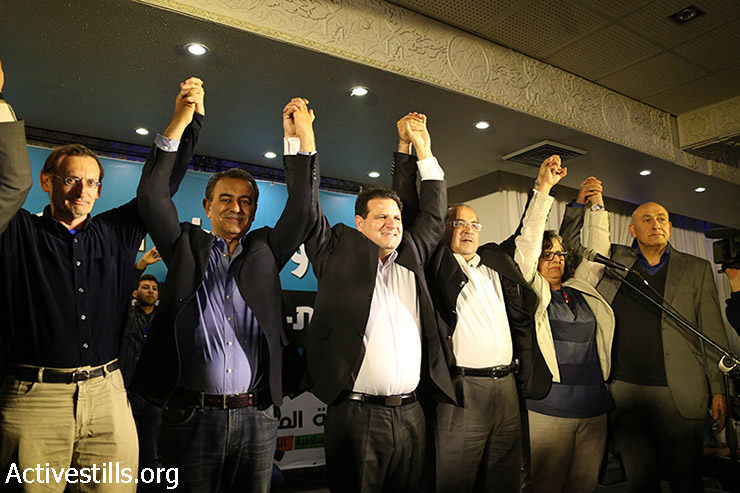 Members of the Joint list are seen during celebrations in the headquarters of Joint List in the city of Nazareth, on the night of the Israeli general elections, March 17, 2015. (photo: Activestills.org) 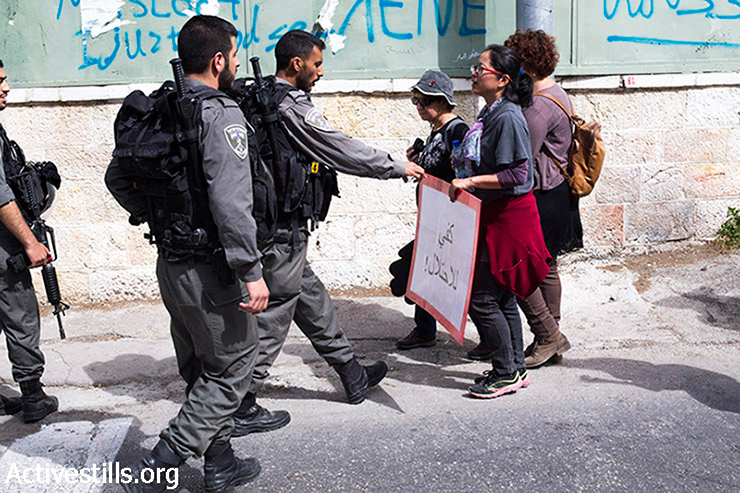 An Israeli policeman confiscates a sign from a protester during a demonstration against the Judaization of East Jerusalem, March 27, 2015. (photo: Activestills.org) 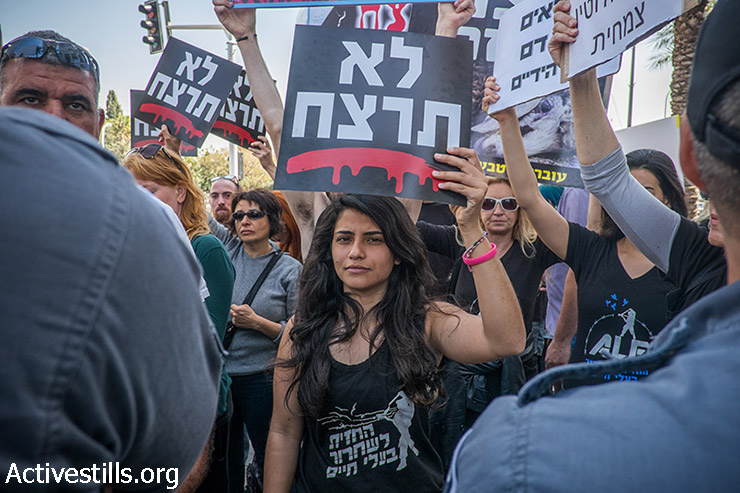