Facing mounting legal costs, Anarchists against the Wall have issued an urgent plea for donations. This is why I think we should support them 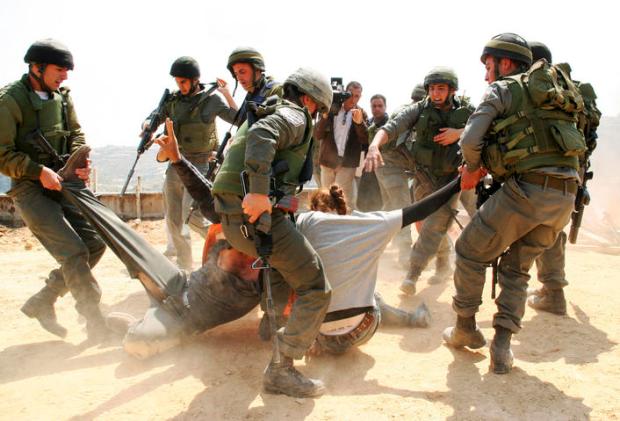 Anarchists Against The Wall is, at least in my opinion, the most important progressive political group to operate in Israel in the last decade. It’s hard to note in a short post the enormous effect the Anarchists have had on grassroots politics in Israel and Palestine, but I will try to make a few points on their actions.

The name of the group might be misleading. AATW are not like similarly named groups in the West. Their main interest is not capitalism or environment, but the occupation. It is a position that assumes real responsibility for their identity as Israelis, and does not shy away from the difficult political reality in which the group operates, in favor of more abstract ideals.

Unlike other organizations working in the West Bank, AATW is not backed by any fund, political party or institution.

While there were Jewish groups that supported the Palestinian cause in the past, AATW were the first to actually join the unarmed protest in the West Bank villages and towns. They did it with considerable personal risk, and while facing extremely hostile reactions from the Israeli public. For years, Anarchists came every day to demonstrations in Mesha, Budrus, Nilin, Bil’in – to name only a few. They were beat up, shot at, arrested and injured.

Contrary to many of the things that have been said about them, AATW joins protest only at the invitations of local Palestinian committees. They don’t take order from any political group – Israeli or Palestinian – but rather come to help grassroots efforts, and only when asked. They are strictly non-violent people. I never saw any of the anarchists throw a stone or hurt a soldier, yet they stand in the front line of protests even in their most intense moments – as can be seen in the video below.

There is no doubt that the presence of the Anarchists has helped “restrain” the army in those demonstrations. The sad reality is that Jewish-Israelis’ lives are not as cheap as Palestinians’. AATW also drew media attention to demonstrations, which helped the local cause. With their support, the people of Budrus & Bil’in were able to move the security barrier that Israel erected on their lands.

I don’t endorse all of the Anarchists’ views or actions, and I guess the Anarchists have issues with many of my opinions (some of them have told me so on various occasions). But I do recognize their importance. Without them, there would have been no Sheikh Jarrah movement and no joint struggle, which is perhaps the last and best hope of ending the occupation. For many years, the Anarchists were the sole Israeli group to constantly oppose the occupation and the subsequent military actions against the Palestinians under Israeli control.

AATW has recently issued an urgent call for donations. It is meant to cover the legal expenses that piled in a decade of struggle. The sum, I heard, is nearing 100,000 USD – also because the Anarchists assume responsibility for the legal defense of their Palestinian partners in the unarmed protest. As always, it is the genuine practice of solidarity that guides AATW’s actions.

If you appreciate the moral positions of Israelis who support the Palestinian struggle for freedom – in action, and not just in words – you need to support the Anarchists.

I add here the personal plea by Matan Cohen, an Israeli activist who was shot injured in the eye by the army during a joint protest. You can also read on the actions of the Anarchists and their effect on both societies, Israeli and Palestinian, in this piece Joseph Dana and I did for The Nation.

First they shot me, now they are charging me

My name is Matan Cohen. Four years ago I attended a demonstration in the Palestinian village of Beit Sira. I joined the residents of the village who were protesting the construction of Israel’s separation wall on their lands. On each occasion that we went out to protest, we were attacked by the Israeli army. Soldiers beat us, arrested us, and shot at us, but the people of the village refused to give up their fight. It was on one such demonstration on Feb 24, 2006, that a border policeman shot a rubber bullet into my left eye. http://bit.ly/a7Ap6c .

My recovery was long and painful and resulted in permanent damage to my vision. Throughout the process I hoped that the soldier who shot me would be held responsible and that the army would be forced to compensate me. Instead, the soldier was not prosecuted. When I sued the Ministry of Defense, the judge decided that not only will I not be compensated, but I that I would be forced to pay for the cost of the trial. The end result is that for the pleasure of being shot by the army, I am required to pay approximately 100,000 shekels — or about $29,000.

I have taken my case to the Israeli Supreme Court with the hope of overturning the lower court’s decision. I am asking for your help in paying the outstanding court expenses and the additional costs of litigating the case. If you can help with the cost of the case, please contribute here: http://www.awalls.org/donations

In thanks and solidarity,
Matan

From AATW: Matan Cohen’s story is one very extreme case of the treatment that demonstrators against the Apartheid Wall face at the hands of Israeli army and police. In recent years, more than twenty Palestinian protestors have been shot dead while participating in the popular struggle, and hundreds of Palestinian and Israeli activists arrested. Anarchists Against the Wall sponsors the massive costs of hundreds of legal proceedings against demonstrators. Once we succeed covering Matan’s debt, donations received will go on serving us for this important cause.

As is always the case on this site, this post represents the blogger’s personal opinion and is not an endorsement by the rest of the writers and/or editors of +972.