Sanctions against Iran, which  have routinely been called ‘targeted’ but are now self-assuredly called ‘crippling,’ have long been crippling rather than targeted when it comes to their impact upon the Iranian people and economy. 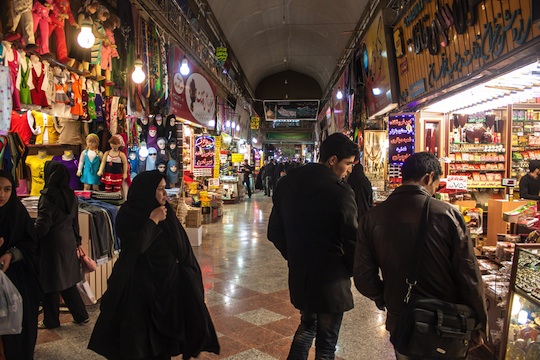 They aim to bring recalcitrant tyrants to their senses, to put an end to their external as well as internal malefaction. With surgical precision, they pull the noose ever closer around the tyrant’s neck, so that in hopeless despair he is compelled to behave reasonably in foreign affairs while, enfeebled, he lifts his bloodied hands from the throat of the oppressed people. It is a morally justified decapitation of evil, the salutary removal of a swelling tumor.

Undoubtedly, in this description sanctions are an extremely attractive option to kill two birds with one stone: The culprit is hunted down, right up to the tyrannicide, and the maltreated people are freed and released on to the path of democracy. Sanctions, it is implicitly assumed, are akin to peace and democracy.

In short, sanctions are civilization’s magic cure against barbarity. Viewed in this light, they fascinate political circles in the West and even parts of the Iranian diaspora. And not seldom, even the most enlightened intellectuals of the Western world are spellbound by the rosy rhetoric of their political leaders, leading many of them to content themselves with simply calling for a targeted and therefore effective application of sanctions to kill the tyrant and free the people.

Thus lifted onto this sacrosanct level, the rejection of sanctions is branded as complicity with the tyrant – a refusal to “tame” him.

In the face of that fantastic image of sanctions, a serious discussion about their extent and impact is flagrantly missing. However, if one takes the trouble to take a look behind the glittery façade of the righteous global policeman whose noble aim is to bring the evildoer down on his knees, the sheer negative image of this very picture cuts the surface.

These sanctions, routinely called “targeted” but now self-assuredly called “crippling”, have long been crippling rather than targeted when it comes to their impact upon the Iranian economy. In this respect, the country’s unparalleled isolation from the international financial system has constituted the eye of storm, which wreaked havoc in even the most unequivically civilian sectors of Iran’s economy.

The neutral-sounding technocratic term “sanctions” veils its true significance as a means of economic coercion.[1] Does it likewise concern us in the slightest that international law can hardly be reconciled with the economic strangulation of an entire nation?[2]

But how is it that for such long a time many have accepted the deployment of this economic weapon of mass destruction?

Asked what the sanctions entail, both representatives from the imposing countries and other proponents of sanctions promptly provide us with a glance into the “magic box” deployed in the fight against tyranny. Rarely, someone will ask about the actual utility and efficacy of such measures in alleviating the repression that dissident Iranians are exposed to: what is the use of prohibiting someone to travel beyond the region who rarely does so? Is the tyrant so naive that he doesn’t recognize he can purchase the same instruments of repression from a panoply of willful sellers on a globalized market? And, do we care that the vast majority of items banned under the “dual-use” rubric are in fact used for civilian purposes?

But how do Iranians themselves feel about the “free world’s” noble gesture of emphatical goodwill? Did the honorable cavalry of sanctions ever contemplate how it is for those people, “who deserved a better life than under the present regime,” to actually live in a country that is under a severe sanctions regime? The voices of desperation that are reaching us at an accelerated rate come from people for whom, in a repressive system, the remnants of breathable air become even thinner by way of sanctions.

The people as hostage: Economic sanctions and democratization

The sanctions narrative is predicated upon the idea that there is a positive relationship between sanctions and democratization, for the tyrant is tamed and the people empowered.

On the ground, however, there is a connection whose logic we would never dare to doubt within the Western hemisphere: a sustainable and socially just democratic change is dependent not only on the energies of the middle class, but also on the intervention of working people and the poor. It is precisely this middle class, the workers, and the poor that are sanctioned to death in Iran. To put it differently, a person struggling for economic survival barely has the luxury of engaging as a citizen in the struggle for democracy.

Young Iranians, who form the bulk of the population, suffer most extremely at the hands of economic sanctions.[3] These are the same people whom the West has otherwise chosen as torchbearers of a future democracy in Iran. Instead of assuming such a role, these same people are subjected to collective punishment.

Widening the power gap between state and society

With legal trade virtually illegalized, the civilian economic sectors — across the board — are damned to lament how black-market operations flourish, benefiting only powerful circles of corruption and nepotism. Hence, as a precise negative image of the above narrative, the regime can even extend its power vis-à-vis civil society as a result of sanctions.[4]

Aware of such fatal consequences, civil-society representatives inside Iran have consistently opposed sanctions. The West, which is always boasting of its support for the cause of democracy in Iran, has simply preferred to ignore these voices.

Crippling sanctions as an act of barbarism

That the concept of “targeted” or “smart” sanctions, which is an inextricable feature of the dominant political discourse, has been adopted unaltered and uncritically by the public discourse in general and many intellectuals in particular, is a testimony of our complacency and unwavering belief in the benign nature of any actions taken by the democratic West. It seems as if we prefer a convenient lie over an inconvenient truth. This self-deception is in fact a necessary act if we seek to keep wagging the moralizing finger, both domestically and internationally.

Most importantly, what does this tell us about our moral constitution, if we are ready to sacrifice entire societies for our purported Realpolitik interests? Thus, in the righteous fight against tyranny, we hide our very own barbarity. For our sanctions are a brutal assault on an entire country and its more than century-old struggle for democracy and self-determination, whose survival has now become dependent on the drip of our incessant and crippling sanctions regime. Tumor-like, the sanctions have infected all areas of Iranian life, acting like a slow poison injected into society.

In a move of Orwellian proportions, the dominant discourse has unhesitatingly turned sanctions into an act of peace. If we unmask that our sanctions discourse is infested by double standards and hypocrisy, the naked truth will be that we are waging an economic war against the people of Iran; that the sanctions are indeed targeted, but rather at the civilian population; and that the sanctions constitute a form of structural violence directed at Iran’s social fabric.

Therefore, two prospects are currently to be feared if the election of centrist Hassan Rohani as next Iranian president is not seized by the West to bring about détente and the removal of sanctions: either a suffering populace has to battle for sheer survival within a securitized system that will not cease to be cemented through the external threat of force and sanctions alike; or, in the wake of an officially proclaimed policy failure of “targeted sanctions,” the call for “targeted bombs” comes along swiftly, and needless to say, war will bury any prospect for democracy and decent life for decades to come. 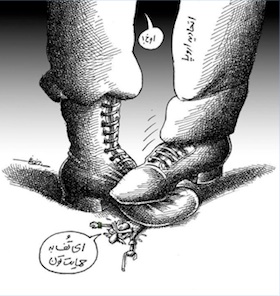 So in the end, the entire image of the sanctions as civilization’s magic wand is nothing but an insidious illusion, the sanctions package merely a poisonous mix wrapped in gift paper and the story of a neat and clean tyrannicide nothing but a PR-spun fairy tale. The Iranian experience of the double burden was not long ago expressed by the famous dissident cartoonist Mana Neyestani when the European Union imposed severe unilateral sanctions. In his caricature, the EU’s leather shoe steps on the military boots of the regime, underneath which lies the democracy activist crushed into the ground. While the regime only reacts with a meager “ouch,” the now doubly crushed democracy activist yells to the EU: “To hell with your support!”

All in all, the West has put together a narrative with which both itself and the Iranian regime can live; but the people of Iran cannot. We should pose ourselves two honest questions: does not everybody enjoy the same human and social rights regardless of the political system they live in? And: If sanctions keep tyrants alive, what would happen if they were completely removed?

Ali Fathollah-Nejad is a German-Iranian political scientist educated at universities in Germany, France and the Netherlands. Currently, he is finalizing his Ph.D. thesis at the School of Oriental and African Studies (SOAS), University of London. Over the last few years, he has focused his research on the social, (geo-)economic and (geo-)political effects of the sanctions regime on Iran.

A shorter version of this article was published in the Frankfurter Allgemeine Zeitung on 3 January 2013. An Arabic translation was published on Jadaliyya.

[2] ‘No State may use or encourage the use of economic, political or any other type of measures to coerce another State in order to obtain from it the subordination of the exercise of its sovereign rights or to secure from it advantages of any kind.’ UN General Assembly, Resolution 2131 (XX), 21 December 1965, para. 2. The resolution was decided without any vote against and with only one abstention. See also Carter, op. cit., Section 7.