This is a post about how Israel prepares for war.

I don’t know if we are going to war. But the awful attack on a school bus by an anti-tank missile fired from Gaza on Thursday, seemed tailor-made to push Israel over the edge. Following weeks of escalation between the IDF and Hamas, the airwaves went into broadcast interruption mode and by the weekend, southern residents went into the shelters, said Israel radio, as the crossfire continued.

In the hours after the bus attack, the surrounding Negev communities felt like a well-designed Israeli stage set for war. There was the press, kicking around the TV vans in sweeping desert dusk. There were the high school kids from nearby kibbutz Mefalsim, eager to talk. They are just a bit younger than the co-ed military police pair, languidly awaiting the opportunity for some desert romance. 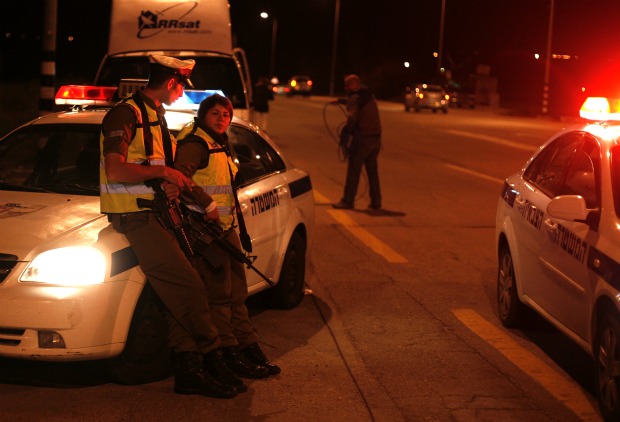 The social worker is there too. She is everything Israelis want and need her to be. Inbal Shlosberg is youngish, wearing a cozy sweater in the evening chill. She has a loving smile and clear eyes that gaze evenly into the Channel 2 television camera. Her message is simple. “We’re meturgelim,’ she says. Trained, prepared, rehearsed. “To our great sorrow,” she tells me, repeating what she has just told the country, “we’re ready. We know the drill by heart.” After the attack, she says, young kids will regress. Old people suffer bouts of fear as well. 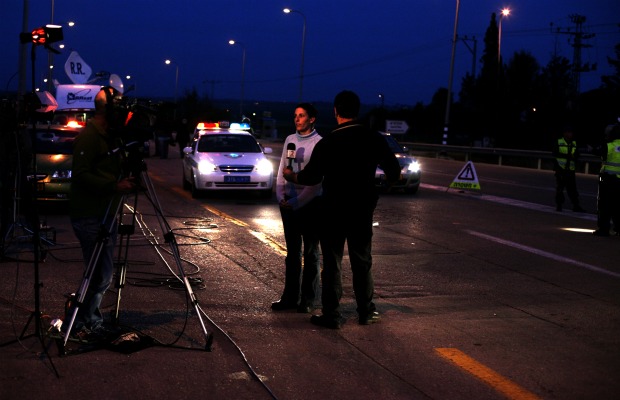 Israeli media interviews a social worker at a checkpoint next to Kibbutz Mefalsim near the Israeli Gaza Border Thursday March 7 2011. (Photo: Eyal Warshavsky)

The teenagers – Raz, Lior and Dor – explain that it is just impossible to live with the worry of the rockets. Have they had personal experience with rockets? Yes! they chorus. Everyone has a story, or knows someone who does. For example, Lior says, “Two years ago, a qassam fell in a yard right in my neighborhood. Glass broke. There were cracks in the walls.” They are more excited to discuss how they themselves might very nearly have been on the bus that was struck, but for a special class trip of their grade.

They argue about what Israel should do now: “Bomb Gaza! Take down half of Gaza, just erase it off the map!” “No, that’s not a solution!” “Yes it is!” Raz emerges from the fray with analysis: “In theory, the solution is two states for two peoples” – and then he completes the line dutifully: “But it will never happen.” His buddies jibe: “he’s a lefty!” and they all crack up.

Raz then goes on to explain the deeper problem, with a famous Israeli soliloquy: “They sanctify death,” he intones, “and we sanctify life. That’s the problem – we want life, they want death. It’s holy for them.” Before the conversation ends, Dor makes sure to add a “Kahana was right!” for good measure.

The city of Ashkelon too has come under fire from Hamas rockets. Thursday, for the first time, a new missile interception system had its first success. But people seem neither joyous nor fearful – just deadpan, resigned, pushing on. 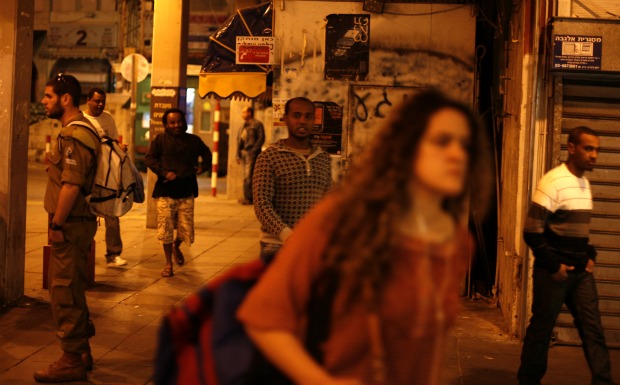 Near the desolate bus station stands the felafel shop of Moshe Mashiach. It’s been there “40 years now!” he says proudly. For the price of an axle-grease fried half-portion, Mashiach agrees to give commentary with a shy “why not?” I wonder if he’s been shyly saying “why not?” to curious questioners for forty years as well.

Moshe doesn’t want war, remembering what it did to his business in 2008 – and yet he seems, well, resigned. When he begins “Another war will be terrible, but…” any Israeli knows how that sentence will end: “…but there’s nothing you can do. They only understand force.” Therefore, he believes “there will be a huge war. It’s irreversible and there’s nothing we can do to prevent it.”

Indeed, he tells of the ominous Israeli troop movement all week in Ashkelon. In the media too,  the fear dial has been turned high, drawing the whole country in – a Friday Haaretz headline, for example, warns that the Mossad believes that the next war with Hizbollah will bring 100 missiles a day in Tel Aviv. Yossi Gurvitz provides a fearfully convincing analysis of political leanings toward war.

I do not believe the Israeli people desire war, just as I do not believe this about the Palestinian people. But Mashiach’s “unavoidable,” claim is hard to refute, especially when  all people of the region seem so maddeningly resigned to our immutable fate of war.

After all, the Middle East is moving toward a great political unknown. The familiar cycle of peace talks and failures is gone. Unilateral Palestinian independence is steering Israel toward uncharted diplomatic waters. No one yet knows what forces will be unleashed by the Middle East revolutions. When everything is new and scary, people cling to what they know, hold fast to their well-rehearsed lines, and stick to their roles. Shlosberg the social worker’s soothing words keep reverberating: “we’re ready. We’re meturgalim.” And that’s what scares me.