How does language shape reality? How does reality shape language? Welcome to the postmodern discourse, where several new Hebrew-language programs are embracing critical pedagogy to leverage social change. 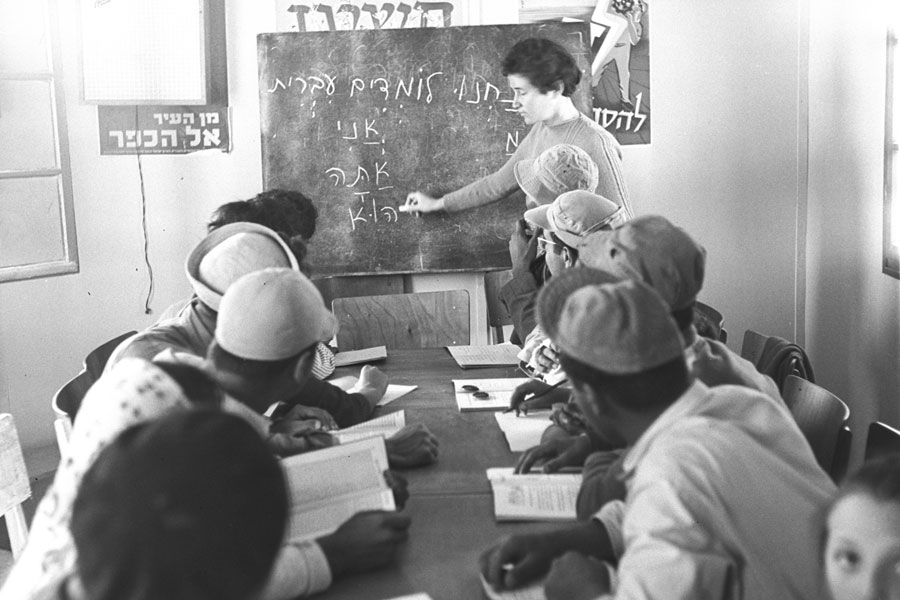 New immigrants to Israel living in the southern town of Dimona study Hebrew at a state-sponsored ulpan, January 12, 1955. (Moshe Pridan/GPO)

Only a century ago, Jews in Jerusalem spoke French, Yiddish or Arabic, that is, until a few devoted secular Zionists like Eliezer Ben-Yehuda re-invented Modern Hebrew as the common language for generations of Israelis to come. For hundreds of thousands of immigrants ever since, ulpans (Hebrew language courses) acted as a first step toward navigating their way through a foreign country and integrating into a new society.

These days, most of those ulpans are licensed and operated by the Jewish Agency; a few others are offered as part of university programs. In addition to serving the student, however, they also have value for the immigrant-heavy state and its quest to create a common national identity, for which a common language is integral. For understandable, historic reasons of nation-building, these programs largely teach Hebrew using materials — maps, photos, texts, and songs — that represent or stem from an exclusivist, Ashkenazi-dominant and Zionist narrative of the country, its history, peoples, and society.

Enter a group of ideological immigrants and linguists who insist that there is another way for newcomers to engage with the Hebrew language — not only through the prism of Zionism and its nationalist narratives. One of the pioneers in trying to make that change is “This is Not an Ulpan” (TINAU). The name of the ad hoc language school reveals its agenda. “We don’t learn Hebrew, we learn in Hebrew,” the alternative language program describes itself.

In 2012 a group of new immigrants to Israel, one of whom was Canadian Daniel Roth, had the idea to change the classic concept of Hebrew ulpans. “It’s not for everyone, but it’s exactly what’s been missing,” Roth says today. “As I made Aliyah (the Hebrew word for immigrating to Israel, l.s.) in 2011, I had the impression that the traditional ulpans were about shaping a learner into what fits in society. They were not critical at all towards nationalistic narratives or what’s happening in the society. We wanted to shape society and not just the learner.”

The group of teachers and students followed a clear critical pedagogic movement: small classes, anti-authoritarian teaching, and critical content. They were inspired by postmodern linguistics and designed the language classes as inclusive talks on politics, gender and society in Hebrew, and later also in Arabic. The classes and topics vary from beginners to advanced levels. A beginner Arabic class in Jerusalem, for example, is named “Navigating Jerusalem” — the course, which is inherently political, is partly taught while walking though the city. Another advanced Hebrew class in Tel Aviv is about “Gender and Identity,” and discusses those issues as they exist in Israeli society. Other offerings have included beginner-Hebrew lectures and discussions with NGOs like “Breaking the Silence,” beginner-Hebrew cooking courses, as well as other cultural meetings and tours.

“We want to deconstruct classical language teaching,” says Shay Soffer, one of the teachers of TINAU in Tel Aviv. Soffer has been with the school from the beginning, but also works as a teacher in a traditional ulpan. “In the regular ulpan we focus more on vocabulary, grammar and homework. Here at TINAU I can shape the lessons more individually, also according to my own interests,” he explains.

The Hebrew beginners class Soffer offers is called “Israeli Childhood.” Most of his students didn’t grow up in the country, so he discusses gives them an opportunity to experience and discuss Israeli children’s books, songs and TV shows; they try to sing along but also talk about the meanings and values behind it.

Soffer considers his students to be critical learners. “Not necessarily ‘lefties,’ but definitely people who search for different perspectives,” he says. When I visit, a class is being held in his Tel Aviv living room. Seven students make themselves comfortable on sofas while eating candy. They come from the United States, Canada, Australia, and Hungary. The atmosphere is relaxed and it appears more like an informal meeting than a language class. 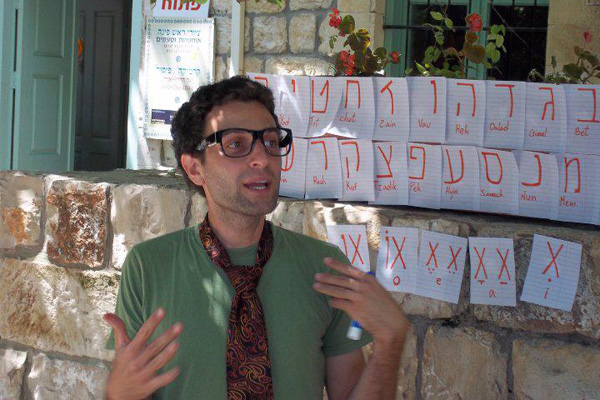 One of Soffers students is Kelly Silverman. She immigrated to Israel from the United States four months ago and says she is “still arriving.” For Silverman, TINAU is a perfect addition to her regular language studies at a traditional ulpan. “I wanted to have a head start so I decided to combine the two,” she says. “My ulpan is much more formal and with 30 students, it’s much bigger. There, it’s about getting the work done, here, it’s about having conversations.”

Where do words come from, what does it mean when I say something? Which world do I construct with that? By using a certain narrative, the speaker is activating it. Some might refuse to use the word “occupation,” others might refuse to use the term “Judea and Samaria,” the biblical name for the West Bank used by many nationalist Israelis. Taking a critical look at language, knowing that language is consequently shaping reality, the TINAU classes don’t hesitate deconstruct the meaning of Hebrew itself as a language.

“They say a ‘proper Jew’ speaks Hebrew. That sentence sounds simple and harmless, but let’s think about that for a second,” Tali Janner-Klausner says, one of the new TINAU teachers in Jerusalem. “When I grew up, I was told that Hebrew is a Jewish language and that it is the only Jewish language. I don’t believe that,” Janner-Klausner adds. Indeed, Hebrew is also spoken and shaped by Arabs in Israel and even the Palestinian territories. And it works in the other direction as well: Arabic was and is spoken by Jews. Furthermore, the Hebrew and Arabic languages share roots and are influenced by each other. Hebrew is a living language, Janner-Klausner explains, “interwoven with Arabic, Yiddish, English and more.”

An ecosystem of alternative language schools

Janner-Klausner was born in Jerusalem and grew up in London. Inspired by TINAU they decided to also open an alternative language school in London that follows the same principals. “When I heard about TINAU in Israel a few years ago, I got excited, since I was also not happy with what the Hebrew schools in London offered in that time,” Janner-Klausner says. Their school in London is named “Babel’s Blessing” and teaches Hebrew, Arabic, Yiddish and English. Ever since, Janner-Klausner was in steady contact with TINAU until it offered them to teach in Jerusalem this year. The class Janner-Klausner offers now is called “Navigating Jerusalem,” a classical beginners class where the students learn how to get around, how the city functions, and its different neighborhoods — in the east and west.

“I don’t think Hebrew-teaching has to be Zionist,” Janner-Klausner says, and gives an example: “The ‘Hebrew from Scratch’ book, which most of the ulpans are using, shows a map of Israel on the first page. On this map, there is no green line and no Palestinian territory. So with this map they pretend toward the students that Palestinians don’t exist here.”

And while some consider TINAU as a perfect addition to the classical ulpans, Janner-Klausner thinks it’s the perfect alternative. But not yet. “You can’t get fluent by just three hours a week,” they admit. Since the critical pedagogic movement in Israel, like TINAU, is still growing, it doesn’t cover enough classes yet. So it might indeed make sense to combine it with a classical ulpan. Also it’s important to know that the bigger ulpans that are recognized by the government are free for new immigrants. All the others, like TINAU, have to be paid privately. “But it’s more a question about time than about method. And I think our method is better for learning the language,” Janner-Klausner says. 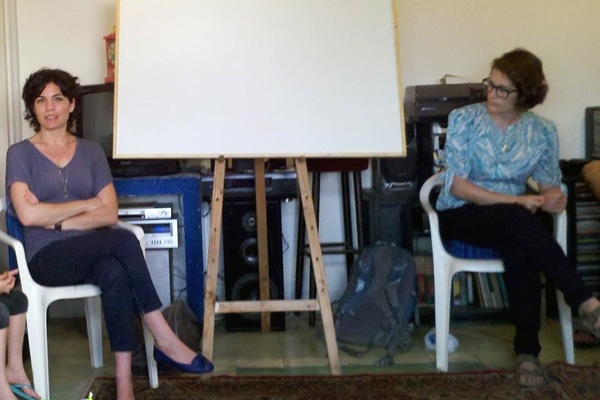 Member of Knesset Tamar Zandberg participates in an early TINAU class on feminism in Israel. (Photo by A. Daniel Roth)

Another outgrowth is Ulpan Dror, initially known as “Not an Ulpan Haifa,“ a clear reference to TINAU. When TINAU co-founder Daniel Roth told his Canadian friend Shawn Guttman about the new alternative language classes back in 2013, Guttman was enthusiastic. “It caught my interest,” he says, “as well as my friends, and we decided to open up our version.” They first called it “Not an Ulpan Haifa,” but then changed name into “Ulpan Dror,” a nod to Guttman’s connection with the Dror movement he joined as he made aliyah in 2010.

Soon after Guttman opened his alternative ulpan in Haifa, the two schools decided to join forces. “For us, a person’s experience in an ulpan is meant to help them understand society and their choice to make aliyah,” says Guttman, who also works as a high school teacher. By teaching the Hebrew language through critical topics and content, he wants his students to take an active role in shaping Israeli society. “So we ask ourselves: what is this country and how do we want it to be. Can we shape it?”

TINAU classes in Tel Aviv and Jerusalem run year round. The summer semester began this week. Ulpan Dror is about to launch classes in two new locations. At the moment it offers classes in Haifa, Mitzpe Ramon and south Tel Aviv.