On election day, Palestinians in East Jerusalem aren’t worrying about who will be the next prime minister — they are too busy trying to protect their homes. 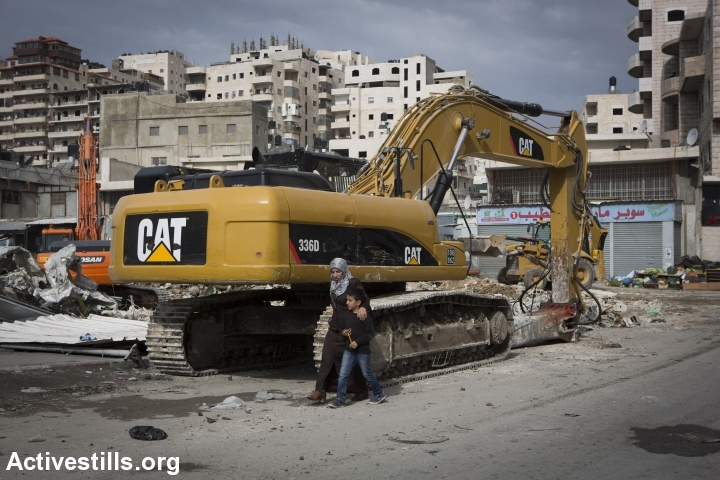 I decided to start my day, Election Day, at the Western Wall. With all due respect to the ballot box, the Wall is the real thing when it comes to depositing small pieces of paper.

The entire plaza was surprisingly empty. Aside from tourists there were very few worshipers. Three ultra-Orthodox girls giggled behind a table near the entrance, writing something on small pieces of paper. With a smile, I ask them if their notes are instead of actual ballots. “Leave us alone,” one of them says. “Why, will Bibi find me a husband and money?”

The guards walking around the Western Wall and patrolling the perimeter aren’t interested in the elections either. “We’ve had a few politicians come down here throughout the week, but today is quiet. It’s better that way.”

I continue along to the Muslim Quarter walk over to visit Ahmad Sub-Laban, the Ir Amim field coordinator, whose home — as part of an eviction —was put under siege by police a day earlier. Ahmad’s family has been living in this house, located just 150 meters from the entrance to the Al-Aqsa Mosque, since 1953. They are protected tenants, living in a home that before 1948 belonged to Jews who lived in what is now East Jerusalem, and later came under the custody of the Jordanian custodian of enemy property.

Over the last years, right-wing groups have been trying to expel Palestinians from their homes, claiming that the families had lost their protected tenant status, since they have not been living there continuously. Now Ahmad, who was born and raised in that house, will be forced to prove that his family has lived there all these years, as the threat of demolition looms. On Monday they were able to delay the demolition, but Ahmad, who understands the reality of East Jerusalem better than most, knows that they could come at any time.

“What happened here last night is undoubtedly connected to the elections. This is Netanyahu’s way of getting votes. He has been speaking endlessly about his intentions to build in Jerusalem — this is how he shows he is serious. Kicking out Palestinians from their homes brings in votes.” 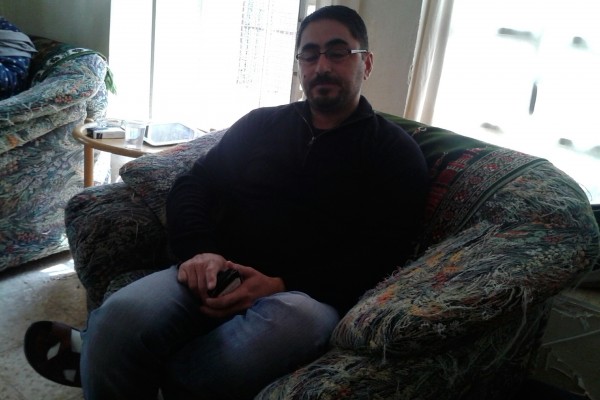 Ahmad Sub-Laban sits in his East Jerusalem home, which is slated for demolition. (photo: Orly Noy)

Outside, near the entrance to Al-Aqsa, stand a few women in hijabs. “Your elections don’t really interest me,” one of them tells me. “I just want you to let me into the mosque. They forbade me from going in for a month because I yelled ‘Allahu akbar’ inside.”

At the exit of Jerusalem Dung Gate, I cross the street for a short visit to the neighborhood of Silwan. This place is asking for trouble; the Palestinians here are put under complete closure during every Jewish holiday. But Silwan is quiet today, and the there is hardly any traffic on Wadi Hilweh Street. On Monday, say the residents, the authorities handed out demolition orders. It seems like Mayor Nir Barkat only remembers East Jerusalem when it is time for elections.

At the top of Wadi Hilweh, I walk into the City of David visitor’s center, only to discover it is rather quiet. “We though that many people would come today,” says Dalila, an employee who tells visitors the stories of King David. “Maybe everyone went to vote,” I suggest. “What!? They vote!?” she asks anxiously, and I understand that she is referring to the Palestinian residents of the neighborhood. “No, they can’t vote for the Knesset,” I say. “Phew!” she lets out a sigh of relief, “Imagine how many seats they’ll get now that their parties have united.”

From there I head to Mea Shearim, the home of the most ultra-Orthodox currents, and perhaps the most political place in Jerusalem. There, discussions take place on top of public message boards, on balconies, even on the sidewalks. There one can find thousands of flyers and polemical posters, either for or against voting, as well as oaths and warnings.

On the border between Mea Shearim and the Makor Baruch neighborhood, just a hundred meters from the nearest polling station, is a Shas campaign table. Farther down stand a few activists for the ultra-Orthodox Agudat Israel party. While the Ashkenazi ultra-Orthodox ignore me completely, the Shas campaigners call me enthusiastically. “Have you voted already? Mizrahim vote only for Mizrahim!”

I wish them success and ask about the border between the two neighborhoods. “Let’s just say it is more comfortable here,” tells me one of the voters, looking over at Mea Shearim. I ask them about Eli Yishai, who split from Shas to run in his own party, alongside Kahanist Baruch Marzel. “I don’t want to slander today,” he responds with a smile. “And what about all these flyers here calling to boycott the elections?” I ask. “These represent a minority, and anyway, they aren’t coming from our people,” he respons. Before we part ways, and despite the fact that I made clear that I had already voted, they hand me a few flyers and a special “key to heaven.” It reminds me of the keys that the Iranian authorities handed out to children who were recruited to fight during the Iran-Iraq war, moments before they were sent to the front lines.

There are few people inside the building where the voting booths are located. Whoever does come, usually does so with his/her entire family. All my attempts to start a conversation with the women waiting in line were politely refused. “We are voting for something good, something that will be good for the nation of Israel.”

On the way home, I make my way through the Mahne Yehuda Market. It is full, but there is no reminder that today is election day, aside from a few Likud activists. Politicians have made their way here almost every day for the past two weeks, but today the shuk was empty of them. I ask one of the sellers whether he has already voted. “Not yet,” he responds. “There is still time. The state isn’t going anywhere. Neither are the bastards.”