+972 speaks with Shawan Jabarin, general director of Palestinian human rights NGO Al-Haq, about how and why the organization decided to start using the term Apartheid, and what role accountability and international intervention could play in guaranteeing human rights. 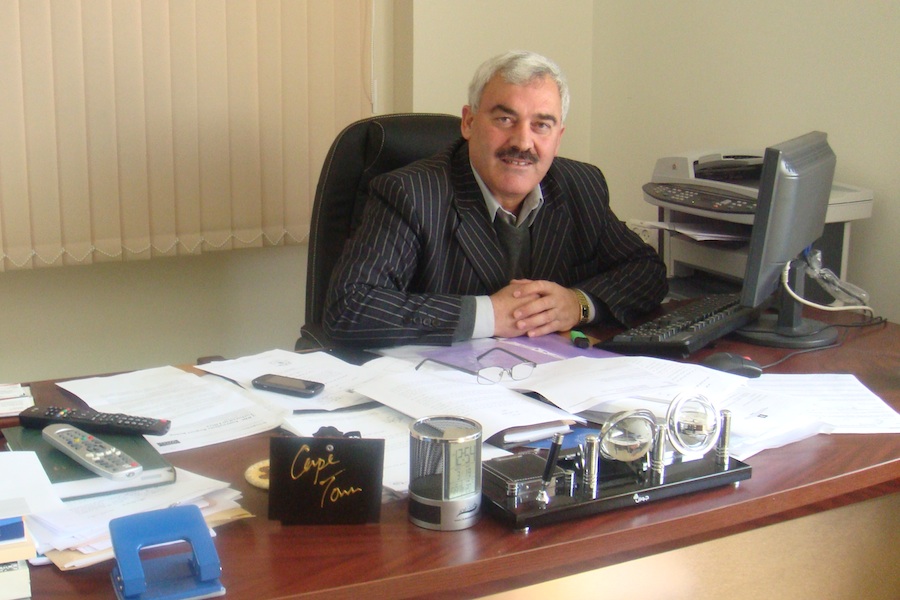 Sitting on a green leather couch in his Ramallah office not far from Al-Manara Square, Shawan Jabarin talks about his hopes and beliefs – primarily, a belief that oppressive regimes have no future.

“I have no hope for the short-term. But I have more than hope for the long-term,” explains Jabarin, the general director of Al-Haq, a Palestinian human rights NGO. “There is no future for occupation. I have no doubt of that. For me, it’s a matter of time.”

He says he views his role as fighting to shorten the amount of time until Palestinians can enjoy human rights. “Maybe it will take years. I keep hope that it will happen in my lifetime. I don’t know, to be honest.”

Jabarin, 52, began volunteering with Al-Haq while studying sociology at Birzeit University. He later went on to study law in Ireland. Jabarin joined the organization in 1987 as a field researcher and became its director in 2006.

Are human rights in the Occupied Palestinian Territories more or less protected today compared to when you started with Al-Haq in 1987?

I think the indicators show a worsening human rights situation. It doesn’t mean the situation in 1987 was good, but it’s deteriorated since then. There is more land confiscation; freedom of movement is more restricted. There is more destruction of property, like house demolitions. More than ever, the people have lost hope of living in peace with the Israelis. The economic situation has deteriorated. Everything deteriorated. Before, we used to close the roads, not the Israelis. We used to go to Gaza freely. Before we used to look at the Israeli settlements as isolated areas. Today, they’re everywhere.

What human rights issue facing Palestinians concerns you most right now and why?

The most important thing is land because it includes natural resources and [relates to] Palestinians fighting for their self-determination and independence. Palestinians look at their freedom without land, and it means nothing. Palestinians look at their economic development; without natural resources and land, it means nothing. I also connect the land issue with settlements. Every aspect of the settlements affects Palestinians’ lives, economically, psychologically, socially, physically and administratively. It’s not just houses here and there. Settlements need bypass roads, water, land and troops to protect them. Land is the main issue.

Is using the term Apartheid to describe the occupation a constructive tool in fighting for human rights, and is the analogy applicable to the occupation?

It took us a long time before we started using this term. We studied it carefully, professionally, academically, and then we concluded that, yeah, based on the nature of this occupation and parts of its practices, we could say it meets the criteria of an Apartheid system. Because of that we started to use the term in the last three of four years. It wasn’t easy for us and we don’t use it politically. We use it legally.

It’s a constructive tool for two reasons. One, on the level of people’s conscience, the Apartheid term is negative and leaves a bad impression. Another thing is that the international community has been obliged to help end Apartheid. There is a convention. There are many different international resolutions from the U.N. regarding Apartheid. So there is a legal obligation to act against and pressure the Apartheid system and to sanction it. But in the end, without political will, nothing will move forward. The international community deals with and treats Israel differently. But that will not continue forever.

Do you think Boycott, Divestment and Sanctions (BDS) can be effective in ending the occupation?

Legally, professionally and formally, I do believe this, but at Al-Haq, we don’t use the term “boycott.” Not because we don’t believe in it, but because there is no legal basis or obligation for it. Our points of reference are human rights, international humanitarian law and public law. There is a legal basis for “sanctions” and “divestment” under international law, but there is no legal basis for boycott. With a boycott, the public is responsible.

What strategies have been most effective in fighting to protect human rights?

Without going after the criminals, without pushing them to pay the price for their crimes, there is no way things will change. This is the main strategy — accountability. We understand it in a bigger picture, not just against a person. Part of it is against businesses. So accountability is one of the main components of our work. We look at it as a preventive strategy; it’s not a goal in and of itself. If Israel paid a political, economic or personal price, I think this is the way you can help things move forward.

How specifically do you hold individuals or Israel accountable?

By addressing the U.N. reports, interventions, campaigns by third party states and using judiciary mechanisms and domestic law. We are also pushing the Palestinian Authority (PA) to join the International Criminal Court (ICC).

Did Al-Haq ever utilize the Israeli legal system in fighting for human rights?

We did in the beginning, but we reached the conclusion in the late 1980s that this system doesn’t work when it comes to the Palestinians. It’s not effective and there’s no hope in using it, except – and we keep the door open – for selective cases and to exhaust the local remedy, as a step before we go outside. And here we cooperate with other organizations, but at Al-Haq we try not to use the system because it doesn’t work for us.

As the leader of a Palestinian NGO, do you encounter criticism for speaking out against human rights abuses committed by the Palestinian Authority and Hamas?

Yes, we receive criticism, even publicly, because we criticize publicly. We try to share information and our position with the public. Most of the time we try to offer our help, to integrate human rights standards and principles in the Palestinian draft laws. And now they send us every draft law so we can add our comments.

It’s also important, for instance, when we make unannounced visits to interrogation centers. That’s not happening in the rest of the world, in any country.

A surprise visit. Just to knock on the door of the interrogation center to speak with the officer. “I’m from Al-Haq. I’m coming to visit, and to see X, Y, Z and to see the situation inside.” And they open the doors for us. This is what happens these days. Only for Al-Haq. We still refuse planned or organized visits.

What is the greatest challenge Al-Haq faces in promoting its mission?

There is a lot of room for intervention. For instance, the Fourth Geneva Conventions. It obliges states to act and stop grave violations of human rights, but they don’t act according to their obligations. For political reasons, they don’t want to do it.

If Israel were Iran, I’m sure they would intervene. They would from day one. If Israel was in the place of Libya, Egypt or somewhere else, they would say, “This is human rights. This is our obligation.” But international law doesn’t work without political will, which is essential for the implementation and protection of human rights.

What type of intervention is there room for?

Using nonviolent tools. Some of the Israelis called it “lawfare.” If you don’t want us to use the law, what do you want us to use? Guns? Please, could you tell me?

It was a case [during Operation Cast Lead] in Gaza in 2009, when the Israelis attacked and invaded. A man in his twenties, a civilian, was in his house, surrounded by soldiers shooting at him and he was injured. We tried to help. He talked to his brother in the U.S. His brother in the U.S. talked to us here but we couldn’t do anything. We contacted the ICRC, the Red Crescent and Physicians for Human Rights, just to evacuate him and to take him to the hospital. The ambulance was nearby, but the soldiers blocked the road, and didn’t allow it to reach the man. He bled to death. It took maybe five or six hours. You just feel that you could have all the organizations, and still you can’t do anything to help this person.

What do you hope Al-Haq will accomplish next?

One of our short-term goals is to exchange our experience and to learn from others, mainly on the regional and local levels. We share our experience with Arab human rights activists. We train them on different issues, human rights, humanitarian law and documentation. In the long-term, I hope to remove from our agenda some of the main, horrible violations – the killing, house demolitions and displacement – and to start thinking about how to improve people’s lives.