+972 speaks with Mary McGowan Davis and Doudou Diène, authors of the UNHRC report on potential war crimes in Gaza. The pair discuss possible consequences of the report, and why their investigation gave them hope.

By Dahlia Scheindlin and Natasha Roth 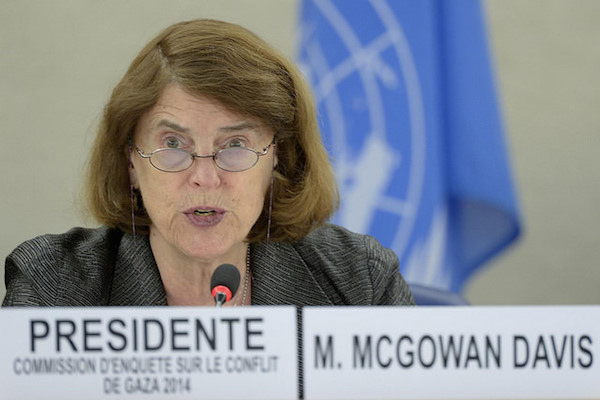 The main reaction in Israel to the findings of the United Nation’s commission of inquiry into last summer’s Gaza war was rejection. That response tops a process so fraught with politics, that it seemed unlikely the commission would be able to say anything meaningful at all.

Israel views the UN Human Rights Council (UNHRC), the body that commissioned the report, as hopelessly politicized. Indeed, the charge that it is “obsessed” with Israel carries some weight when considering that resolutions about Israel-Palestine  constitute almost half of the UNHRC’s country-specific resolutions.

The Human Rights Council does have other commissions of inquiry investigating North Korea, Syria, Eritrea and Sri Lanka. But with countries such as Congo, Pakistan and Saudi Arabia sitting in judgment of Israel’s human rights record, it is plausible that the Israeli-Palestinian conflict is sometimes exploited to distract from egregious violations elsewhere. The latest UNHRC-commissioned post-mortem only compounded Israel’s lingering rage against the eponymous Goldstone report, anger so forceful that even its author later expressed qualifications.

Notwithstanding Israel’s knee-jerk defensiveness against any criticism, the UNHRC has in fact lost legitimacy in the eyes of many of the states whose behavior it wishes to change. That raises questions about how functional such a body can really be. In the current case, the Council faced tangible constraints: The original head of the commission of inquiry into Operation Protective Edge, William Schabas, recused himself during the process after relentless Israeli pressure and accusations of bias. He left on the technicality that he had not disclosed a past consulting job with the PLO.

What could the remaining authors, the American judge Mary McGowan Davis and Doudou Diène of Senegal do when starting with such a zero-sum, short-fuse keg of dynamite?

The answer is, quite a lot. Speaking by phone to +972 Magazine from Geneva, the authors of the report admitted that they felt the boot of the political delegitimization of the HRC; Israel not only refused to participate in the inquiry process, it did not even permit the commission members to physically enter Israel or the Gaza Strip.

Israel’s decision was a matter of political principle for Israel, says Diène.

“One could feel that we are a pariah, and it doesn’t make the process any easier,” McGowan Davis recalled.

Whether or not in response to this background, the final result was a report that is much harder for Israel to dismiss, despite its ongoing attempts to do so.

The authors began by interpreting their overall mandate to be more inclusive than the HRC resolution that initiated the investigation. That text spoke only of examining possible human rights and war crimes violations in Palestinian areas. Both McGowan Davis and Diène explained that the commission took a conscious decision to interpret this as including potential violations originating from Palestinian areas – violations by Palestinian forces against Israeli civilians, in addition to the reverse.

The report provides such exhaustive treatment of both sides that the commission has been relentlessly accused of misusing symmetry, either for false equation of strength (as Palestinians claim), or false equation of legitimacy between a state and a terror organization (as Israel has repeatedly claimed). Pro-Israel critics charge that the commission failed to give the context of Israel’s 2005 disengagement from Gaza; others say the political reality is an asymmetrical conflict between a sovereign state with an army, and a weaker, stateless people occupied for decades.

McGowan Davis rejected the accusation, explaining that the commision’s legal mandate was solely to examine conduct during the war – or jus in bello – not the question of going to war itself, which is a different legal category: ad bellum.

“That’s why we treated all sides the same,” McGowan Davis expanded. “Everyone is bound by the same rules: proportionality, precautions, and distinguishing civilians from combatants.” In other words, Hamas and Israel were investigated as, quite simply, the two sides fighting in a conflict.

Perhaps unwittingly, the report draws on numerous sources often accused of anti-Israel bias, in counterintuitive ways. Amnesty International, which supporters of Israel view as hostile, is cited for documenting Hamas weaponry used against Israeli civilians. The authors use UN figures showing the numbers of rockets fired at Israeli civilians, which they point out are even higher than official Israeli sources. Documentation of Palestinian groups firing rockets from populated areas is drawn from the international media, which Israel has taken to humiliating.

The more balanced approach, observed even by much of the Israeli media, should open minds to the significant critical findings. Many of those findings challenge Israeli talking points about the war — “hasbara” – head on.

One such criticism that runs headlong into hasbara involves proportionality. Israel repeatedly claimed that its civilian to combatant casualty ratio is better than other conflicts.

Asked whether that is a reasonable yardstick, however, McGowan Davis simply said “No.” She went on to explain, “It’s not the overall ratio, but attack by attack – a house where a bomb is dropped and 20-odd people are killed and maybe there’s a militant of some sort, but when you weigh that against 21 innocent lives, women and children, is that proportionate?”

Yet she was quick to observe the complexity of assessing military targets, which makes it hard to judge proportionality. “That’s difficult. I’m not suggesting otherwise. But it’s not a matter of simply saying, we only killed 500 and someone else killed 5,000.”

Diène was unequivocal: “We concluded that the principle of proportionality was not respected.” He recalled writing to Israel asking for a justification of strikes on densely populated urban areas, in vain. “They did not respond. And as you know, our conclusion [about bombing densely-populated neighborhoods] is that it amounts to a war crime.”

Other tough findings for Israel include the determination that under international law Israel still “effectively controls” Gaza – something most Israelis fail to realize – or that the much-vaunted “warning system” to protect Palestinian civilians was insufficiently effective.

And still, they meticulously documented every possibility, even rumors, that there may have been a military target among civilian casualties. They examined claims of Hamas firing from civilian areas and infrastructure, and wrote of the execution of suspected collaborators. Those make it still harder to discredit the report.

Ignoring the report altogether may further damage Israel’s cause, Diène hinted. Both authors raised doubts that either side would genuinely investigate or change its own conduct in the future. They pointed to the International Criminal Court as a means to strengthen accountability. McGowan Davis hoped the U.S. would not hinder the ICC: “[In the U.S.] there is talk of punitive measures that might be taken towards the ICC, and that’s not what’s called supporting the process.” 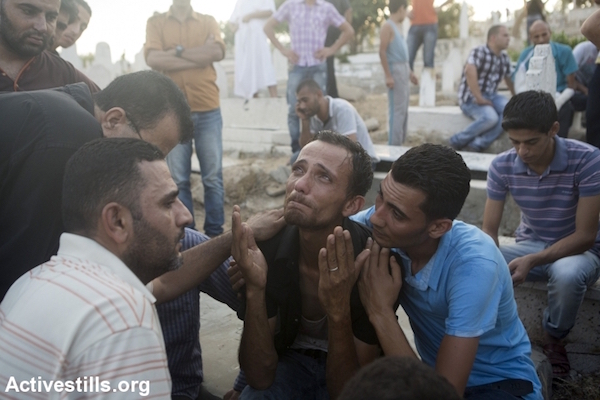 A relative of a child killed earlier in a playground in al-Shati refugee camp mourns at a cemetery, Gaza City, July 28, 2014. Reports indicated that 10 people, mostly children, were killed and 40 injured during the attack which took place on the first day of the Muslim holiday of Eid. (Photo by Anne Paq/Activestills.org)

In the course of the ICC’s ongoing preliminary examination into the situation, this report will be first formal document it draws on, explains Diène. Israel’s official position will be glaringly absent.

Their doubts about local capacity for self investigation were compounded by the Israeli Military Advocate General’s decision, just days before the report’s publication, to close its investigation into four Gazan children killed on the beach in an air strike. Both authors were disappointed.

“It was an incredible decision,” Diène says. “It was an emblematic case in which I thought Israel would try to strengthen the credibility of its accountability mechanism. What happened? Where is the reasoning?”

But what truly distinguishes the Human Rights Council report is its unapologetic emotional and humanizing style.

Despite the Israeli government’s non-cooperation McGowan Davis and Diène told +972 Magazine that many private Israeli citizens reached out to tell their stories. The judge felt that these people still had faith in the UN as a forum for justice. Together with Palestinian testimonies, each seem to have experienced both sides of the war very personally. The report treats all suffering extremely seriously, despite the asymmetry of death, lifelong wounds and physical destruction.

Yet the writers were simultaneously struck by the hope for peace and empathy witnesses on both sides expressed. “We spoke to one [Palestinian] man who lost eight members of his family,” McGowan Davis recalled. “What do you say in these situations? … It was hard to experience and take it in.” But she continued, “In the end [the people we spoke to] want peace. They say, ‘I’m concerned about my neighbor on the other side.’ They want peace and they want their leaders to achieve it. It’s extraordinarily humbling as an outsider to come in and hear these things.”

Diène said: “We have heard testimonies from people who have lost relatives, yet have expressed a very deep feeling for the suffering of the other side.” He went on: “The father of Mohammed Abu Khdeir told me that many Israelis came to his house to express their solidarity [after the murder of his son]. …On the other side, the [Israeli] mother of a 4-year-old child that was killed [by a Palestinian rocket] expressed very emotionally her deep thoughts for mothers on the Palestinian side. There was a human side to this war that was not really perceived by the outside world.”

They purposely chose the emotional tone throughout the report, hoping to recall the humanity of each side and generate some hope. It’s not something anyone has come to expect from the international investigations of all-too-regular wars.