Palestinians in the West Bank often face an internal clash between identity, ideology, politics and reality. In truth, they live in a place where making any decision in life is a dilemma. 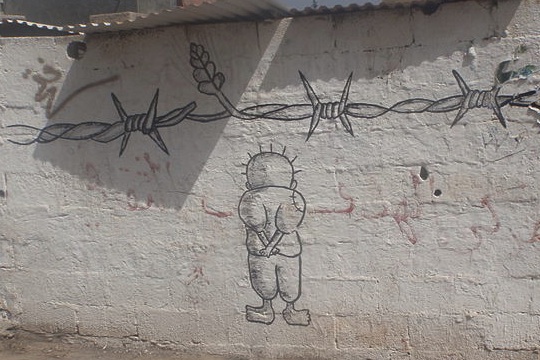 Handala graffiti in the West Bank village of Bil’in. (Photo:Palobserver/Wikicommons)

A few weeks ago, on a tour I was leading through the Old City of Jerusalem, I stopped next to a souvenir shop with a t-shirt display outside. I wanted to explain certain cultural and political things that were printed on these shirts. On one of the shirts was the famous cartoon figure “Handala,” created by Naji al-Ali, the most well known Palestinian cartoonist. Al-Ali was assassinated due to his controversial cartoons.

I told the group about al-Ali’s life – he was a Palestinian refugee and a fearless man who spoke his mind. Everyone was subject to his criticism. I continued by describing Handala, a cartoon which depicts a 10-year-old boy with his back turned to the reader. The cartoon has become a symbol of the Palestinian struggle for freedom and justice.

After a few minutes, the owner of the shop came out and started nodding his head in approval. I asked him if it was okay for me to continue talking about the shirts. He said yes. After I was done with my remarks, the shopkeeper told me that I was excellent, saying “I am happy with your explanation, it was remarkable and well done.”

Soon thereafter, the co-leader of the tour, an Israeli named Shira Nesher, turned the attention of the group toward the other t-shirts displayed outside the shop. One was an IDF shirt, another was an Israel Police shirt. There were other funny ones, such as a t-shirt that read “Super Jew.” There were also shirts with political slogans like “America don’t worry… Israel is behind you.”

Suddenly, the shopkeeper face turned into a frown. He looked at me and said “I am not happy with what she is saying.” I asked him why he is selling such t-shirts if he is not happy with them. He stumbled and finally said “tell them that I am forced to sell these shirts – they force me to display them,” referring to the Israeli government.

However, reality is different. I know of shops in Jerusalem that do not sell these kind of shirts. Shopkeepers make a choice based on ideology, and that choice costs them financially. Many tourists in Jerusalem want to buy these Israeli shirts. Our shopkeeper, like many others, is faced with a dilemma: sell t-shirts that go against their ideology, or make less money. Despite choosing to sell the shirts, our Palestinian shopkeeper was not proud of displaying the IDF logo. On the contrary, he seemed ashamed to the point that he had to lie about being forced to do it by the government.

The dilemma facing the shopkeeper is not unique. Traveling around the country, I have met many Palestinians in similar situations. Tens of thousands of Palestinians faced a similar dilemma several weeks ago, when they received permits to enter Israel during Eid al-Fitr (the Muslim holiday marking the end of Ramadan). While many Palestinians support the Boycott, Divestment, Sanctions movement (BDS) and are against vacationing with Israelis, the beaches in Tel Aviv were full of Palestinians who have never been before. Thousands of Palestinians took the chance to shop in Israeli stores for the Muslim holiday. These Palestinians were met with the dilemma of ideology versus curiosity, causing many of them to act in ways contradictory to their political beliefs. Those who went to the beaches in Tel Aviv choose to show their kids the sea that they had only heard of.

The shopkeeper in the Old City, the Palestinian shoppers in Israeli malls, and those vacationing in Tel Aviv had an internal clash between identity, ideology, politics and reality. Many Palestinians face similar dilemmas on daily basis. They live in a place where making any decision in life is a dilemma.

One friend told me that has been shopping at Rami Levi supermarket which is known for being a pro-settlements chain. He claimed that the prices are sometimes 10 times cheaper than Palestinian shops in the West Bank. It is a large store, and isn’t subject to the same restrictions, taxes and fees (due to checkpoints) as Palestinian shops. He justified his actions by explaining that he cannot afford to shop in a Palestinian store.

I quickly began explaining how he needs to support Palestinian shops and the Palestinian economy. I asked him whether he feels guilty buying from a settler shop instead of a Palestinian one.

He looked at me with a puzzled face, and after a sigh told me that I could not understand his reality. He continued, saying, “You have a good job, you can afford being self-righteous and spend 8 times more in order to buy in the Palestinian store. I can’t.” He explained that he has to choose between a hungry night for his children for the sake of a political ideology on one hand, or compromising for the sake of feeding the children on the other.

After talking to him, I found myself facing a dilemma of my own. On one hand, I wanted to tell him that one cannot grow the Palestinian economy by shopping in the settlements. Prices will go even higher and unemployment will increase if people continue to buy from settlements. Palestinians inevitably increase their suffering by not supporting Palestinian products. On the other hand, I could not tell the man to keep his children hungry. I left feeling conflicted – knowing what is right, but also understanding the price others have to pay.