Intentions be damned, when many Jewish Israelis meet Palestinians even their compliments come out laced with passive-aggressive racism half the time. A comprehensive guide for Palestinians. 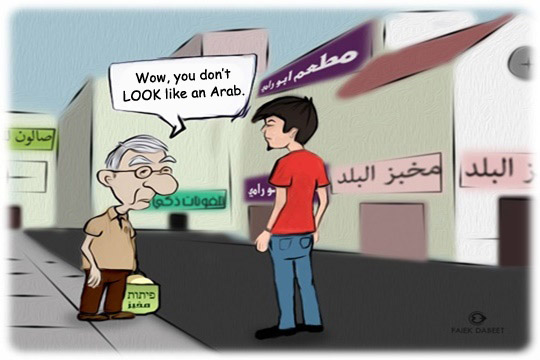 There isn’t a single Palestinian citizen of Israel who isn’t familiar with the phenomenon. It can happen in the middle of a conversation, during a cigarette break at work, or in pretty much any interaction in a public place — with a complete stranger: Israelis who feel a little too comfortable giving racist “compliments” to Palestinians.

As a Palestinian who grew up with and has been friends with Israelis his whole life, I learned a long time ago to ignore all those with enough chutzpa and tactlessness to publicly and directly spout passive-aggressive racism. But many Palestinians, the masochists among us who haven’t yet adopted a “fuck it” approach to the day-to-day of living in the Jewish state, still try and respond to the douche-of-the-hour who is emboldened enough to express his or her ignorance or racism politely, with a smile.

So I brought together a group of Palestinian friends and we came up with some recommendations for dealing with the not-all-that-creative, often banal racism you’ll find being spewed by Jewish Israelis.

An all-time classic, and number one on the list of racist compliments. Nobody knows where it originated, but this one managed to embed itself in the minds of so many Jewish Israelis who seem to think that they have rays of sunshine splashing out of exactly where the sun don’t shine.

It’s particularly annoying because it is based on the appearance and/or behavior of an Arab, with unadulterated racism as its point of departure. It doesn’t matter what your skin color is or how clearly Arabic your name is. The moment someone realizes that you don’t speak or act the way The Only Democracy in the Middle East™ educated them to believe you should or would, chances are that the mother of all racist compliments will home in like a heat-seeking missile, with little tiny afterburners launching it out of the mouth of whoever suffers from any of the following three ailments: woeful and complete ignorance, an actual belief that his or her shit smells like roses, or a combination of the first two.

How to respond: The best way is to scornfully ignore it. If you feel like you need educate the arrogant racist, you can use one of the following responses:

1. Wow, oops! I totally forgot my tail at home today!

2. Seriously? The truth is you kind of look like an Arab. (Especially recommended when dealing with a Mizrahi Israeli Jew who is trying to convince him- or herself that their grandfather only spoke Arabic because he was a hipster who thought it would be cool to learn a few phrases in an exotic language.)

‘You live in Lod? Your family lets you live away from home? Right on! How courageous!’

This is a “compliment” that, unfortunately, the fairer sex has to contend with far too often. When Jewish Israelis see a Palestinian man living alone in Tel Aviv they generally assume he’s a university student or a construction worker. But if they see a Palestinian woman living all by her lonesome in the big city, suddenly they pull out their feminist torch, ready to fight for the liberation of all women, regardless of creed, ethnicity or nationality. Considering that Israeli society is itself pretty patriarchal and oppressive of women, it’s a bit hard to understand where that patronizing arrogance comes from — as if heading down to Jaffa for hummus on Saturdays somehow imbibes them with an intimate knowledge of the ins and outs of Palestinian society. Two women in our little focus group had responses.

1. If the compliment comes from a man: “And it was really courageous of your wife to marry someone like you.”

2. If the compliment comes from a woman: “Yes, we also allow Arab women out in public. In your specific case, it’s a bit unfortunate that Jews have the same tradition.” 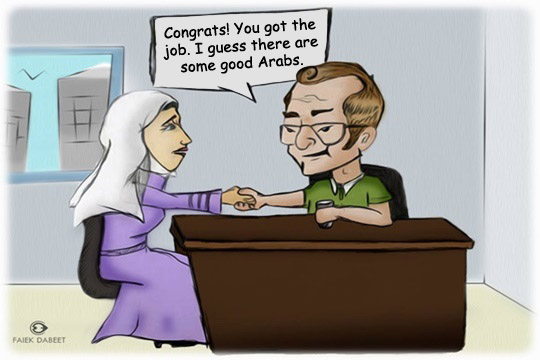 ‘You’re proof there are good Arabs. They’re not all terrorists.’

This is usually something that follows something you’ve done that your Jewish-Israeli interlocutor deems worthy of appreciation, usually from somebody who doesn’t realize they that they are only in the position they are by virtue of being Jewish. Chances are he himself was a terrorist of sorts (a soldier in the occupation army), and just can’t admit it. Try and remind him sweetly and gently.

How to respond:  There’s one sentence that will always make smoke shoot out of the ears of Zionist Israelis (i.e., those who support Jewish supremacy). “Wow, thanks! It’s really special to hear that from someone of a nation in which so many terrorists have grown and blossomed.”

‘Wow, you’re from Nazareth? What a great place. Do you know Muhammad?’

Jewish Israelis are still trapped in the idea that all of us live in one small village, that we all know each other. From their perspective, urbanization is an exclusively Jewish phenomenon — they have absolutely no awareness of the Palestinian urbanization process that was interrupted by the occupation of 1948.

At the same time, they buy fully in to an ideology of segregation they were educated into from day one: Muhammad comes from a village, Moshe comes from Tel Aviv.

How to respond: Say “yes” and walk away. Why? Firstly, because it’s fun to watch someone’s jaw drop. Secondly, because it’s true. We all actually know one Muhammad or another from Nazareth. 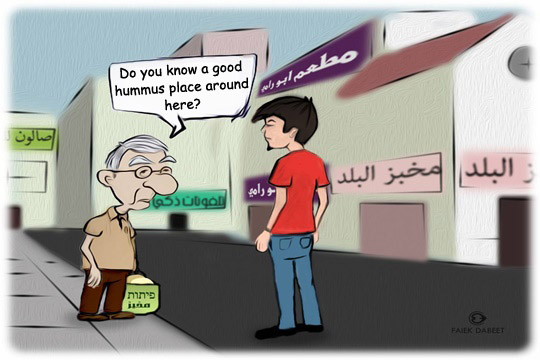 ‘I tried making hummus and it didn’t turn so out well. What’s the secret?’

Stereotypes are also racist. Unfortunately, just being born Palestinian doesn’t confer an ownership stake in the Abu Hassan hummus restaurant in Jaffa. The assumption that every Arab knows how to make — or even enjoys eating, for that matter — hummus at home, even though it’s probably excellent, is pretty friggin’ racist. It doesn’t make it less racist just because you didn’t think your stereotype was hurtful, even if you were trying to praise the wonders of the Palestinian kitchen.

How to respond: Chances are that the person who asked you really does just want to learn how to make good hummus, even if he or she came off racist by instead of asking about the full scope of Palestinian culture, asking about one of its simplest dishes. Explain their mistake gently. Explain that being Arab isn’t just about hummus, but a rich, unique and deep canon of poetry, literature, and fascinating history that has helped advance the human race.

When you finish with all that, don’t forget to tell them that the secret is to use less lemon and to add a bit more garlic. Otherwise it’ll come out like something they sell at Trader Joe’s.

‘Next time you bring the food. Your food is way better.’

This usually happens in a work or university setting where Palestinians and Jews work or study alongside each other. It may be annoying and disappointing that the expectation is always on the Arab of the group to bring food, because “ours is tastier.” But let’s be honest: would you really prefer that the Polish-Jewish guy bring the food?

How to respond: Bring the food. Stop being so sensitive to mildly racist stereotypes. Especially in a workplace setting, good food that everyone can enjoy and for which you can take credit, will really only work in your favor — maybe even with the boss. Learn to exploit stereotypes for your own benefit.

‘You, the ‘Israeli Arabs,’ are alright. Our problem is with the Palestinians.’

How to respond: “Your mom is an ‘Israeli Arab.’ We’re all Palestinians, you asshole.”

This article, a version of which was first published in Hebrew on Local Call, was written in collaboration with Nardin Srouji, Haitham Bishara, Maisa Abed al-Hadi, and Faiek Dabeet, all of whom look and act like Arabs. If only more Jews acted like them.