With Hamas’ new charter about to confirm the organization’s commitment to a two-state solution, the unifying demand from the Palestinian leadership for a resolution to the conflict can no longer be denied. 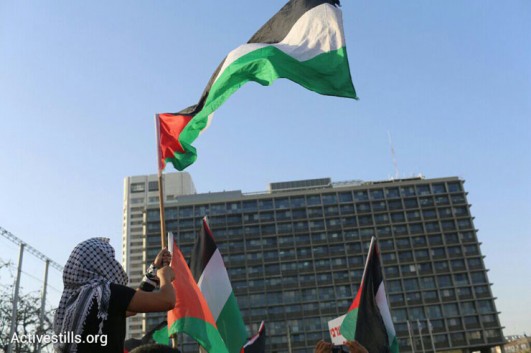 The debate over one state, two states, three states or something in between for Israel-Palestine has once again risen to the fore. At times, the one-state solution has been presented as the best, most likely and most realistic option, by figures as diverse as President Trump, Jewish Home head Naftali Bennett and eminent Israeli author A.B. Yehoshua, along with the radical Left (Palestinian and Jewish alike).

But as I recently wrote, the overriding principle in the struggle against the occupation and for peace is recognizing that everyone who lives in this land must be part of the solution. No decision can be taken without Palestinian involvement. And on Thursday, it became clear that the Palestinian leadership has coalesced around a single option: the two-state solution.

Hamas’ new political platform, revealed in Haaretz, will ratify the organization’s official recognition of the two-state solution (a change which, by the way, Hamas embarked on 11 years ago). This is also the position of Fatah, of course, and that of the Palestine Liberation Organization, as well as of the vast majority of the political parties that represent Palestinian citizens of Israel in the Knesset.

Representatives of the majority of the Palestinians who live under occupation have stated time and again their commitment to the two-state solution (alongside the same commitment from every Arab and Muslim country as part of the Arab Peace Initiative, and the support of almost every other country in the world for that plan).

We can, of course, talk about versatile solutions to particularly sensitive issues, whether it’s simple land swaps or complex confederated arrangements, as proposed by the “Two States, One Homeland” movement. But any discussion on a resolution — especially in Hebrew — that fails to address the sweeping Palestinian demand that two states form the basis of a solution, simply continues to trample on the rights of the occupied, and dictate their destiny to them.