Israelis are more willing to discuss and accept their country’s role in the Palestinian Nakba – until the historical events are portrayed as the story of the founding of a rival nation, and acknowledging those facts means legitimizing the other side’s fundamental beliefs. 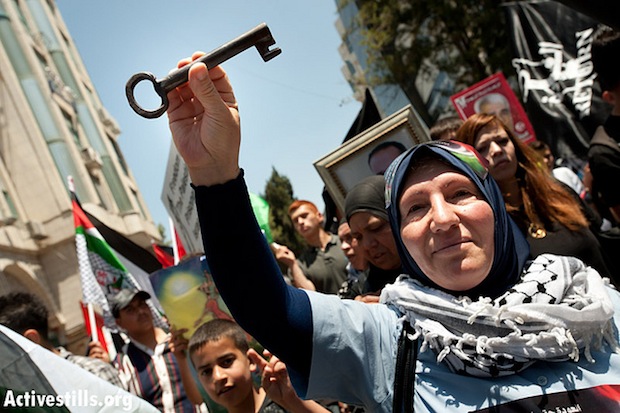 In 2008, a fascinating, little-known study asked 500 Israeli Jews about Israel’s behavior throughout the history of the conflict.  The study was conducted by Rafi Nets-Zehngut, at the Teachers College of Columbia University and Daniel Bar-Tal of Tel Aviv University’s School of Education. Bar-Tal is an internationally regarded expert in political psychology. Some of the findings were striking:

• More than six-in-ten said that prior to the arrival of the “Jewish pioneers” in the late 19th century, Palestinians were a majority in the region (“majority,” “vast majority,” or “exclusive inhabitants”).

• A majority, albeit very slim (50.2 percent), said that Jews and Arabs share the blame equally (46 percent) or primarily Jews (4.2 percent) are to blame for the outbreak and continuation of the Israeli-Arab conflict, while 43 percent blamed primarily Palestinians and Arabs.

• Most important for Nakba Day, when asked who was responsible for the “departure” of Palestinian refugees during the 1948 War of Independence, 41 percent chose the traditional Zionist narrative that they left due to fear and exhortations of Arab leaders; but 39 percent chose a response that cited fear and calls of Arab leaders, but also due to expulsion by Jews. Another eight percent cited only expulsion by Jews. That means that nearly half – a 47 percent plurality – accepted the Jewish role in creating Palestinian refugees.

Further, by using the terms “Palestinian” to refer to the pre-state days through 1948, the questions themselves implicitly tested people’s acceptance of the terms of the debate. The fairly standard rate of “don’t knows” indicates that people had little problem with the assumptions in the text of the questions. Also, fewer than one-fifth of Jewish Israelis describe themselves as left wing these days, so a significant portion of those respondents are either center or right wing.

The findings imply a potentially significant shift in Israeli attitudes compared to the past, when the Palestinian refugees were the greatest obstacle of all. During the Camp David negotiations of 2000, when I was working with American pollster Stanley Greenberg supplying public opinion data to then-Prime Minister Ehud Barak almost nightly, the refugee issue tended to be the toughest problem, even as the Jewish public advanced significantly toward unprecedented compromises on Jerusalem (documented in Greenberg’s 2009 book). Just after the talks collapsed, a Hebrew University survey in late July, 2000 asked Israelis (and Palestinians) whether they thought their respective leader’s compromises on each item had been appropriate, too much or too little. Among Israelis, the perception of Barak’s proposed compromises on Palestinian refugees gathered the highest “too much of a compromise” response of all (64 percent gave this answer, compared to 57 percent for Jerusalem).

Twelve years later, in a December, 2012 survey by the same authors (Jacob Shamir and Khalil Shikaki), the Palestinian refugee question no longer holds the most-rejected-clause spot. That distinction now goes to the proposals on Jerusalem, based on the old Clinton framework (59 percent rejected them, 38 percent supported them). Respondents were asked about a refugee compromise which reflects the Clinton, Geneva Plan and Arab Peace Initiative approach:

Both sides agree that the solution will be based on UN resolutions 194 and 242. The refugees would be given five choices for permanent residency. These are: the Palestinian state and the Israeli areas transferred to the Palestinian state in the territorial exchange mentioned above; no restrictions would be imposed on refugee return to these two areas. Residency in the other three areas (in host countries, third countries, and Israel) would be subject to the decision of these states. As a base for its decision Israel will consider the average number of refugees admitted to third countries like Australia, Canada, Europe, and others. All refugees would be entitled to compensation for their “refugeehood” and loss of property.

Among the 600-person sample, which included Arabs, 42 percent accepted this and 49 percent rejected it – a significant decline from nearly two-thirds who felt it was “too much of a compromise” in 2000.

Behind the numbers lies a potential drama. First, they confirm what Noam Sheizaf elegantly argued, that the anti-Nakba onslaught under the previous government has failed to erase the Nakba from the public sphere, while general usage and awareness of the term has only increased. Bar-Tal also noted in a more recent study that the Israeli education system is increasingly open about exploring critical versions of history – findings that were met with a wall of resistance by the Israeli government, for the crime of comparing Israel and the Palestinians’ education system.

But the data shown here hints at something both deeper and more pragmatic. They suggest a growing realization among the Israeli people that the Nakba is not only a feature of history but alive in the present-lived reality of Palestinians and that it must be addressed in the negotiations.

Indeed, for Palestinians in the West Bank and Gaza, the Nakba lives on in the form of daily occupation. Symbolically, Israel’s denial and until recently the world’s general dismissal of their historical and present symbolic narrative is a fresh death each day for the Palestinian collective psyche.

Despite the positive shifts, half of Israelis still reject the refugee compromise in the December 2012 poll; tempers rage around public debate on the topic, and a 2009 survey for the peace movement One Voice found that 60 percent of Israeli Jews totally rejected a compromise that included “recognition of the suffering” of Palestinian refugees.

Yet I cannot agree with a guest post here today that the rejection is due to “arrogance.”

In a phone interview with Daniel Bar-Tal for this article, he explained that the ongoing Jewish resistance to dealing with the Nakba is simply a reflection of the fact that the Jewish people as a nation are no more or less immune to the human characteristics of collective identity than any other people:

On the most universal level: why is it hard for any nation [to acknowledge the damage it has caused in the past]? It’s very, very universal [to resist this]. All nations do it.

He cited the very recent British acknowledgment of responsibility for its actions in Kenya, and former French President Nicolas Sarkozy’s difficulty acknowledging France’s behavior in Algiers. “Nations have a hard time opening their Pandora’s box,” he said. “We’re no different.”

Bar-Tal believes that the story of the Nakba, a symbolic narrative of the Palestinian nation, clashes with the Zionist national narrative.

This reason is more psychological, but critical: identity. The Nakba … is viewed as the identity of the whole nation in the eyes of its people. And accepting the narrative of the other cancels my identity. If you have to accept that 1.3 million Palestinians were here, all the Zionist rationale begins to be thrown into doubt.

Bar-Tal then explained that when Netanyahu introduced the demand that Palestinians recognize Israel as the Jewish State, the negotiations were now about symbolic and identity dimensions, rather than, by implication, just technical and pragmatic solutions.

He brought that into the conflict – up to then we could have solved the problem without narratives. The moment you ask them to recognize that this land is and belongs to Jews, they can’t accept that.

Perhaps it was at this point that the Nakba was increasingly embraced among Palestinian activists. And by contrast to Bar-Tal’s implication, I believe that the symbolic, narrative element of conflict would inevitably enter resolution efforts regardless of Netanyahu’s particular condition.

In other words, when Israelis or any people are asked to acknowledge historical facts and their own role in creating traumas, they are less defensive. But when dry history doubles as the mythical story of the founding of a rival nation, acknowledging those facts means legitimizing the other side’s fundamental beliefs. Since the Israeli image of the Palestinian national vision includes the certainty that Palestinians seek destruction of the Jews, the national narratives – like in most conflicts – are mutually exclusive. Accepting this keystone of Palestinian symbolic national history is tantamount to self-destruction.

Surely, similar conflict psychology can be seen on the Palestinian side too. Even when a conflict is asymmetrical, psychological dynamics overlap. But that would be a separate article.

Both sides will need to exorcise their demons regarding the other, not to gloss over the present but in order to unlock the door to the future. Here are the fundamental questions for the Israel side: first, can the Right’s frenzied efforts to stifle consciousness of the Nakba succeed? The results seem to say no. Activism recalling the Nakba has only heightened and the data here implies that the Israeli public is ahead of its leaders in acknowledging not only history, but the implications of history on conflict resolution.

Secondly, how can the large swath of the Israeli public that is prepared to reconcile with its past in the present be expanded and leveraged? How can this political maturity be brought to bear on future negotiation efforts or any other effort to resolve the situation? Surely, beating a guilt-fatigued population with more historic guilt will backfire (if it hasn’t already). Is there a less threatening way to address and redress history that does not undercut Jewish identity in this land? This is one of the vital challenges of the day, that the Nakba (and perhaps the “Jewish state” definition, for Palestinians) symbolizes for all parties in the conflict: can each side acknowledge the most sensitive and frightening aspects of the other party’s identity without losing its own, and then lashing out violently to protect it?

Read more:
PHOTOS: Palestinians commemorate Nakba Day with rallies and protests
The Nakba: Addressing Israeli arrogance
Despite efforts to erase it, the Nakba’s memory is more present than ever in Israel
Report: Forced displacement on both sides of the Green Line
Remembering the Nakba, understanding this is a shared land