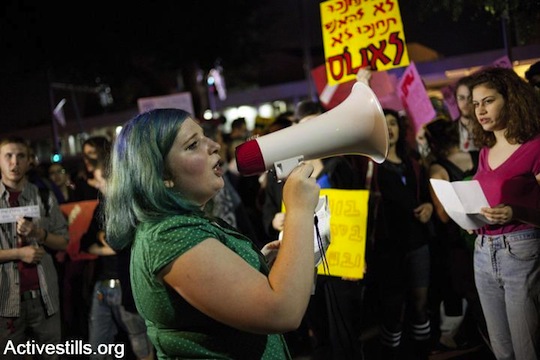 A protester shouting slogans at a “SlutWalk” against sexism in Tel Aviv on March 22th, 2012. (photo: Activestills)

For the last 10 days I have not been able to think of the occupation or political mini-dramas of the new government. I read the New York Times every morning, but I can hardly recall the headlines. Even, god help me, the butchery in Syria and now the Israeli involvement seem further from my heart momentarily than a very local story.

It is so local, I wonder if +972 readers would or should care. It is so mundane, based on subtleties and slippery facts, that I wonder how I can possibly allow it rival the importance of towering life or death issues.

It’s simple sexual harassment – not a uniquely Israeli problem. One of the top television news personalities in the country, Emmanuel Rosen, has been accused by a large number of women of harassment over the years and there are rumors of rape. After a lengthy expose in Haaretz on April 26 (Hebrew) aired the claims of about 10 female colleagues, he went on leave of absence from Channel 10. The police began an “examination” which as of Monday turned into a formal “investigation.” Here in Israel it is a major news story making the headlines almost every day since it broke at the end of April.

But there’s nothing simple about it. Rosen’s womanizing personality  is known far and wide even to those like me, who don’t know him personally. Colleagues know him as a skirt-chaser at work too, and in the close circles of the Israeli media cliques, the current accusations don’t seem to surprise anyone – especially women.

Yet the whistle-blowing has been faint. No one went to the police, or (as far as we know to date) raised a formal complaint at his main current workplace – Channel 10, a private television station (he was active in other media outlets too). But Channel 2, his former employer and the highest-rated television station in the country apparently confronted complaints about him a few years back. It has emerged that he was let go for ‘unbecoming behavior,’ and subsequently hired by Channel 10.

The accusations were exposed by a group of women journalists who recently organized into a professional guild (Ta Itona’iyot, or the “female journalist caucus“). Vered Cohen-Barzilay, a feminist activist and former journalist who was involved from the beginning explained to me that they hadn’t  intended to focus on sexual harassment. But in the early meetings when the agenda was being formed, the issue just poured out naturally from participants at every one of 15 round tables (Hebrew), with about 40 who specifically complained about Rosen.

Since the story broke, senior press figures have now been in the odd position of both reporting on the news, while being talking heads – about themselves. Some have stated that the top execs in the field knew about his harassment and worse, but did nothing. Others, like Channel 10’s own Raviv Drucker (Hebrew) have tended towards “cover my ass” commentary about all the things they didn’t know while hinting that the firestorm might be exaggerated. Other male regulars in the press have taken to prefacing their comments with a sort of ritual confession explaining the degree of acquaintance or friendship with the fallen star as if appropriate distance inoculates him. One of the best voices, with whom I identify perhaps most closely, has been Haaretz’s fantastic and unrestrained reporter and commentator on feminism and gender issues, Tsafi Saar. I’d like to quote her now, but I wouldn’t know where to start. The interested reader can start by reading everything she writes.

In fact, I don’t know where to start writing at all. Should I begin by giving a pithy description of the fascinating social media dynamics, the frenzied debates between the genders running on Facebook forums? Should I describe the defensiveness and anger of many men, morphing into a quick deflection of the issue to a  media problem? “The media” is holding a “kangaroo court,” and “ruining his life,” which is what security reporter Roni Daniel said impromptu on Channel 2 news, as a media figure who has absolutely no expertise in gender issues. He was implying that Rosen doesn’t have a fair chance to defend himself (when the story first broke, Haaretz reported his repeated refusal to give a response; he then denied everything and spoke of a smear-campaign against him). Do I talk of the occasional woman who seems more interested in staking out a punchy “davka” counter-point, by joining the accusations against the media instead of those against Rosen? Or about the heart-warming men who simply get it?

Should it be the tales of trauma now being shared by an appalling number and range of women, an ever-spreading stain whose blackness and girth are still deepening and spreading? The strength and vulnerabilities intertwined in their cries? Or maybe I should tackle the hard-core pragmatic dilemmas: complain and you can ruin your life, reputation and profession and become the victim, again. Keep it quiet and you perpetuate the cycle.

Is there an Israeli angle here? A lag in the evolution of gender relations that many outsiders still view with a 1950s romanticism: sturdy sunburnt limbs in khakis side-by-side in kibbutz fields, or chicks with guns? Or maybe it’s not just a delay but a specific Israeli character to the troubled dynamic here, something that emanates darkly from the recesses of militarism and machoism that the Israeli establishment clings to with a death-grip. Maybe the troubled power-and-submission relation between the genders – in public institutions, in the bedroom (Hebrew), in religion – reflects destructive interactions in other obvious spheres.

Or should I tell my own story? Maybe it’s wiser to wait on the grand social analysis until the dust settles and in the meantime, explain to anyone who still doesn’t get it what it’s like to invest all your life and talents, stake all your energies and efforts, days and nights and weekends, suspend your fears and insecurities and convince everyone they don’t exist, to dive into a profession you believe in and fight your way to a level of confidence and possibly impact – and then to be slapped down to nothing. For the curse of being born a women, to be told, in effect (or literally, as I have) “all that’s well and good, but we know what you’re really good for.” And the entreaty that follows: Sleep with me. Go have babies. Let’s go to your place. Let’s get a place. Let’s have a non-standard relationship. I’ve met you once, but how’s your emotional life these days. I’m sorry, I love my wife, I’ve never been in this situation before. I’m sorry, I love my wife, but she hasn’t wanted to have sex lately.

Yes, I’ve conflated, paraphrased, forgotten and repressed some of the crap I’ve heard over the years. No, not all of them fall under the classic or legal definition of sexual harassment in (or out of) the workplace. Yes, I’ve heard them all in some form and each of those notions more than once. In case any man reading this thought we would think this drivel was unique – you are invited to stop embarrassing yourself with congenital unoriginality. And why do I even care about unoriginality in such a traumatic situation? Perhaps the pain is so deep that we search for the seemingly meaningless details so as not to cope with the awful feelings inside. Perhaps they highlight the filthy feeling of being reduced to one of a million anonymous, identical targets – replaceable. Maybe the insult to my intelligence – that you thought I would buy it – is too great to bear.

No, I never complained to the workplace and I am ashamed I wasn’t able to prevent or redress those situations, instead of what I did: stew in my humiliation and the wreckage of my self-worth, built from the ground with my own sweat and blood. Confuse my rage at him with rage at myself, for not telling him to fuck off, or even before that: for not projecting a personality so unfathomably wonderful that he could never countenance such disrespect in the first place.

This is why I have been powerless to write so far: emotions have taken over and there are very many serious, pragmatic, rational and vital angles to be addressed and I hope to write about them too in the future (in the meantime, Yossi Gurvitz has done a fantastic job articulating much of what I think about the current debate in Israel, sadly not yet in English). And in general, I don’t view my emotions about my personal life as appropriate subject for the public sphere.

But if that’s what it takes to communicate how bad this problem is, I feel I owe it to society. I’ll never forgive those men for forcing me to deal with their private parts, against my will, instead of what I came to work that day to do.

It’s becoming bon-ton this week to say that a few text messages Rosen allegedly sent to the unfortunate women is simply not so bad. It’s not rape, and come on, if you’re such a strong, empowered, educated woman, it’s not even really traumatic.

Wake up. It’s not the text message, fools. It’s the diseased manipulation and stinking dehumanization behind them.