NGO Monitor’s most recent report on foreign government funding of Israeli left-wing NGOs glaringly omits publicly available financial statements, making their data unreliable and full of distortions. The pathetic truth is that NGO Monitor’s ‘researchers’ couldn’t be bothered to leave their office, drag themselves to the Registrar of Non-Profits, pay the necessary NIS 65 (about $16) and get the CD containing all of the information. 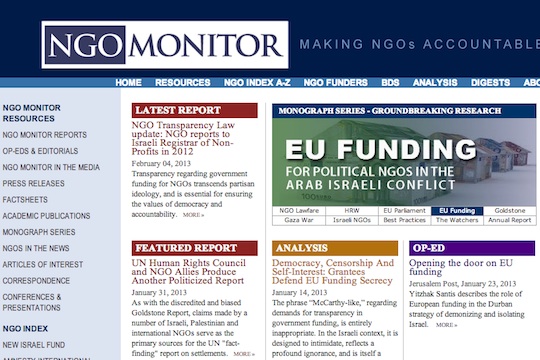 NGO Monitor is one of the most influential organizations in Israel. A group of irksome right wingers with too much money originating from foreign donors, NGO Monitor is in fact one of the main engines propelling Israel’s new Right. If one follows Ben-Dror Yemini’s texts, for example, one finds that he often relies on their reports without doing too much fact-checking. If one reads the reports published by “Im Tirzu” and then searches those by NGOM, one soon discovers that “Im Tirzu” reports are but a watered-down version of NGO Monitor’s reports, sans the difficult words. In short, it is a kind of “Hasbara” Perpetuum mobile.

Now, relying on their reports is really not a very smart idea. As exposed by Noam R last week, NGOM specializes in half-truths and Ad hominem attacks. Those who uncritically swallow their claims might even believe that “Resolution 19/7 was initiated by the abusive regimes of Cuba, Venezuela, Mauritania (on behalf of the Arab Group), Pakistan (on behalf of the Organization for Islamic Cooperation), and the Palestinian Authority”. NGOM dearly hopes that you don’t check the facts and find that states like Norway, Slovenia, Sweden, Switzerland and others – none of whom, last I checked, were members of the Arab League or the Organization for Islamic Cooperation – signed that mandate.

Never mind their distortions, that is to be expected. We are talking about a “Hasbara” organization after all. But the stupidity! The stupidity! For example, NGOM’s latest report claims that B’Tselem received NIS 4,144,203 from foreign governmental sources. The correct sum, NIS 6,714,025 is alas, much higher, as can be seen in the NGO’s quarterly reports. In effect, by its own logic, NGOM is an organization subverting Zionism by assisting extreme-left non-profits hide the funding they receive from anti-Israeli sources – even when these non-profits declare it openly!

How could such a staggering mistake happen? Well, NGOM didn’t bother to actually read B’Tselem’s information. They took their information from the website of Israeli Registrar of Non-Profits, whose work is criminally incompetent even in comparison with the average Israeli public body. The registrar’s website only presents three quarterly reports by B’Tselem for some reason – even though B’Tselem submitted the second quarter’s report, it is missing from the registrar’s website. So, as far as NGOM is concerned – it does not exist. Furthermore, they managed to ignore two reports – for NIS 449,891 and NIS 61,433 – that do actually appear online.

This is not the only case. The registrar’s website only includes two quarterly reports submitted by the Association for Civil Rights in Israel (ACRI) in 2012, the sum of which was quoted by NGOM as ACRI’s 2012 income from foreign governmental sources – NIS 3,614,668. Same thing for Gisha: the sum appearing in NGOM’s report is the sum of the reported donations to Gisha for the first and fourth quarters, NIS 1,632,285. In the case of Ir Amim, there is only one quarterly report online and this is the figure quoted by NGOM, NIS 1,055,806. As for Rabbis for Human Rights, NGOM quotes the figure received by the organization for the first and second quarters – it seems that the registrar is rather idiosyncratic in its choice of quarters to update – which is NIS 982,049. There are probably further examples, but the game isn’t amusing enough to continue. (To see for yourself, visit the Registrar of Non-Profits website, enter the NGO’s name, and view the quarterly reports, or at least those that registrar bothered to upload.)

Now, if NGOM was serious about its job, someone there might have remembered that a year includes four quarters, not two or three, and to suspect that they may have found their holy grail: irregularities in the activities of human rights NGOs. But they don’t say that. They admit that all the organizations follow the law and have all the relevant paperwork. So what actually happened here? The pathetic truth is that NGOM’s “researchers” couldn’t be bothered to leave their office, drag themselves to the office of the Registrar of Non-Profits, pay the necessary NIS 65 (about $16) and get the CD containing all of the information.

This is what NGOM’s reports are worth to those who write them. Keep that in mind the next time they issue a report.

The State of Israel overdid it two weeks ago, when it summoned the Argentinian ambassador for a reprimand. The reason behind it? Argentina had the audacity to include Iran in the investigation of the terror attack against the Buenos Aires Jewish Community building. They will set up a truth commission, with neither Argentinians nor Iranian citizens as representatives. Previous investigations attributed the attack to Hezbollah.

This week, Argentina kicked back, with gusto. Argentinian Foreign Minister Héctor Timerman summoned the Israeli ambassador, Dorit Shavit, for his own brand of diplomatic reprimand. The ambassador reported that the conversation was “harsh, tense and unpleasant.”

During the conversation, Timerman said things that Israeli representatives haven’t heard in a while. He told Shavit that Israel’s meddling with the investigation is interfering with his country’s internal matters and that it encourages anti-Semitism. He stressed that “Israel doesn’t speak on behalf of the Jewish people and does not represent it. Jews who wanted and want to live in Israel have immigrated there and have become Israeli citizens and those who live in Argentina are Argentinian citizens. The terror attack was against Argentina and Israel’s desire to be involved in the matter only gives ammunition to anti-Semites who accuse Jews of a dual loyalty.” Every word. And it is about time that more countries say this to Israeli representatives.