The Left is mobilizing around the process while ignoring troubling signs: the dangerous dynamic of the Oslo/Camp David period is already here. 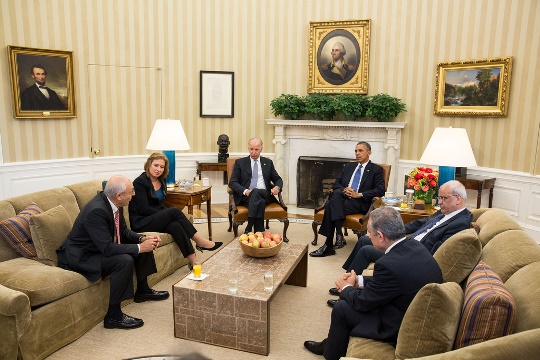 President Barack Obama and Vice President Joe Biden meet with Israeli and Palestinian negotiators in the Oval Office, July 30, 2013. After failing to get any concession from Netanyahu, the Administration bullied the Palestinians into the talks (Official White House Photo by Chuck Kennedy)

On Wednesday night, as members of the Israeli Knesset were getting ready to vote on a package of amendments that could push the Palestinian parties out of the Israeli parliament, political activists were conducting last-ditch efforts to persuade coalition members who previously opposed the bill to actually vote against it.

Only one did, former Knesset speaker Reuven Rivlin, who called the new legislation what it is: not an attempt to improve government procedures, but part of a dangerous effort to deny the multi-cultural nature of Israeli society and further alienate the Palestinian population. A couple of other coalition members abstained.

Yet former Labor leaders Amram Mitzna and Amir Peretz, both opponents of the piece of legislation, voted “yes.” So did their party’s leader, Tzipi Livni, who rushed back from Washington – where she was attending meetings with Palestinians negotiators – in order to support the coalition. In fact, it was Livni’s tiny faction, Hatnua, that provided the necessary final votes for the bill that Avigdor Lieberman and Yair Lapid promoted.

Mitzna explained his act in a Facebook status he posted later. “Our party participated in the elections on one issue – the diplomatic process – and we did it big time… I wish those laws didn’t exist, but you can only influence from within.”

Mitzna wasn’t alone.The prevailing message on Thursday among the coalition’s “doves” was, “we got the talks, so we can agree to all these hiccups.” That was also the answer to critics of the referendum bill that passed that day, determining that any decision to withdraw from Israeli territory will need to be confirmed in a national referendum. According to the logic of the Israeli Right, ending the occupation and handing civil rights to millions of people is something Israelis get to decide; Palestinians should stand aside and hope for the best.

Earlier this week, the Maariv daily paper exposed a secret deal that allowed the passage of the government’s decision to release around 100 Palestinian prisoners. Prime Minister Netanyahu promised the settlers – in writing, apparently – that he would build several thousand new housing units in the West Bank. An American source also confirmed to Maariv that Israel never said it would stop settlement construction during the negotiations. Apparently, the administration agreed.

These are but three examples of the more troubling effects of the resumption of peace talks. After several difficult months, the Israeli Right is back on track, free to pursue its colonial projects and racist policies. The pressure is off Israel’s more centrist elements, while the settlers are being compensated for staying in a coalition that has agreed to sit down with the Palestinians.

All that wouldn’t be so frustrating if it weren’t for the cheers from the entire array of peace organizations in Israel and abroad – just as things are getting worse. Every other day, another public statement or mass email congratulates Secretary of State John Kerry for his “achievement,” urging us “not to give in to cynicism” and express our support for “the process.”

What exactly did Secretary Kerry achieve? After a three-year standoff in which Prime Minister Netanyahu demanded the administration roll back its insistence on a settlement freeze, then rejected the terms of reference reached in previous rounds of negotiations – including the internationally-accepted pre-1967 borders, and finally introduced a new, bizarre demand (the recognition of Israel “as a Jewish state”) – after all that, the State Department basically agreed to everything the Israeli Right wanted and then bullied the Palestinian Authority into negotiations.

The most striking part in all the reports about peace talks is that the U.S. administration didn’t get a single concession – not one – from Netanyahu (unless there are some secret deals we know nothing about). All Israel agreed to were “good-will gestures,” which have nothing to do with the issues at the heart of negotiations.

Yet One Voice, J Street and even Americans for Peace Now – who are usually smarter about these issues – are celebrating (along with other organizations). Along with liberal analysts and journalists, they are shifting their focus from the reality on the ground to the peace process, and warning against “skeptics” and “extremists.” So are politicians in the Israeli peace camp, from Livni’s party to the rebels in Labor, who are now trying to defeat party chairwoman Yacimovich and rush to enter the government. Don’t any of them remember the lesson of Oslo? That the “price” you pay in the process – from settlement construction to dealings with corrupt leadership – is the very thing that ends up destroying any chance for peace, human rights or justice?

This is exactly why so many people on the ground feared the moment that peace talks are renewed. Michael Sfard, the leading human rights attorney in Israel, told +972 last week that “the peace process has become a major enemy of human rights.” While the idea sounds counter-intuitive, it is a view shared by many people who fight to end the occupation – from field workers in the West Bank to the younger generations in Israeli leftist parties to activists on campuses; they all know that this week was but a preview of what lies ahead. And their own leadership could now undermine their hard work because they see their own political interests in supporting “the process.”

The role of the human rights community and peace activists is not to mobilize around the diplomatic process but to oppose the occupation, along with all forms of racism and discrimination on both sides of the Green Line. These are two different things, and they can often be at odds with each other – especially when the desire presents itself to ignore troubling signs in the name of the peace process. At such moments, the choice should be clear.

This week, the calls should have been louder against settlement activity, against the attack on Arab politicians and against plans to displace thousands of Palestinians on both sides of the Green Line. The shadow they might cast on the talks should be welcomed, not ignored or downplayed, because diplomacy can’t and shouldn’t exist in a bubble.

Ultimately, this is also the only way to make sure the peace process is honest, serious – and successful.

Related:
What went wrong? Learning from the mistakes of Oslo
Knesset approves bill that could push Arab parties out
A colonial addiction: The twisted logic of the Netanyahu government