+972 speaks with Michael Sfard, human rights attorney and legal counsel and co-founder of Yesh Din – Volunteers for Human Rights, about litigating key human rights cases, past and pending, and the ‘mighty price to be paid’ when advocating Palestinian rights from within the Israeli legal system. 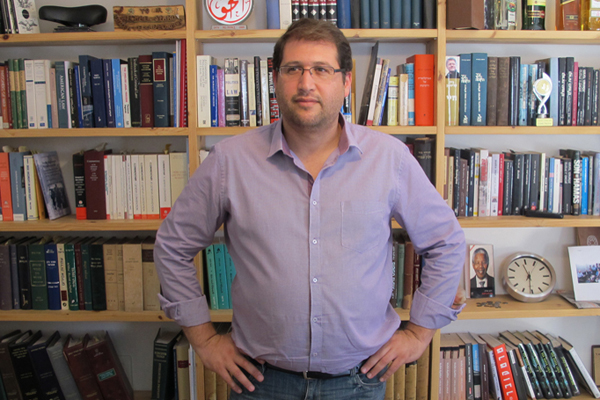 With Palestinians and Israelis expected to restart negotiations in the coming days, most people are talking about the peace talks’ chances of success or failure and the details of what topics are on the table.

Sitting in front of a small legal library in his Bauhaus Tel Aviv law office, Attorney Michael Sfard has something else on his mind. The peace process, he says, has historically had negative consequences on human rights in the occupied territories.

“While talks are happening Israel gets away with anything. Land grabs, the expansion of settlements, even [Operation] Cast Lead was waged while there were peace talks.”

When the world focuses its attention on the peace process, he explains, it is much less attentive to Palestinian victims and the cries of human rights organizations and civil society.

In the past decade or two, “the peace process has become one of the major enemies of human rights,” Sfard continues, and “no peace process will be fruitful if people are suffering on the ground.”

Along with a team of five attorneys, Sfard represents the human rights organization he co-founded in 2005, Yesh Din, along with a host of others NGOs, individuals and groups ranging from Israeli NGO Breaking the Silence and conscientious objector Natan Blanc, to the residents of Palestinian villages like Bi’lin, who fought and won to have the route of the separation barrier moved around, rather than through their village.

Born in Jerusalem, Sfard, 41, studied law at the Hebrew University and University College of London. Since becoming a lawyer in 1999, he has focused on human rights and Palestinian land rights cases, first as a legal intern and for nearly a decade in his own practice.

Are human rights in the Occupied Palestinian Territories more or less protected today compared to 2005 when Yesh Din was founded?

In 2005 it was still the second Intifada. I hope people are generally not as miserable today as they were then in the West Bank. There’s a different type of human rights abuse that occurs during active armed hostilities, as in 2004, when we started talking about creating Yesh Din, and the type of human rights abuses that happen in times of relative quiet. But I think all in all, the occupation is getting worse when you measure it in terms of human rights abuses in times of quiet. We are ready to do things that were unthinkable, definitely in 1967, but also in the 1970s. Today we have grown accustomed to large-scale displacement, land grabs and almost institutional violence against Palestinians. The human rights meter of the occupation is getting worse.

In a legal context, what human rights issue concerns you most right now and why?

That we have installed a dual legal system in the West Bank. The issue here is not just discrimination, but a systematic, institutional legal discrimination that is based on nationality and is meant to allow domination over a group. The fact that we have created this legal atrocity, a monster, and we live peacefully with the idea that Jews and Palestinians are subject to different laws, this is something that I can’t sleep at night because of.

The High Court of Justice recently ordered the government to reopen the investigation of the IDF shooting of American activist Tristan Anderson in 2009, based on a court petition filed by Yesh Din. What were the problems with the initial police investigation?

This is a case that I litigated together with Attorney Emily Schaeffer. Tristan’s case is a good example of how investigations are run just in order to say that Israel had an investigation and not in order to really discover what happened and whether there is anyone who is legally responsible. When we received the file, we immediately discovered that the investigating team had only interviewed one group of police and not the one that likely shot Tristan.

If Tristan was a Jewish boy from Jerusalem, I don’t think I would have needed to file a High Court petition in order to convince the authorities to widen the scope of the investigation. The fact that he is an American peace activist, the fact that he is seen as someone who fought shoulder-to-shoulder with Palestinians, who are seen as our enemies, together, all of that resulted in a flawed and unprofessional investigation.

What strategies have been most effective in holding Israeli authorities accountable in the OPT and fighting to protect human rights?

The legal route has its powers and abilities, but also its shortcomings. Public advocacy has its own advantages and disadvantages. One of my important cases was on behalf of the village of Bil’in. We petitioned the court to remove the separation wall that took more than half of the village’s land. The weekly demonstrations in Bil’in became very famous and very successful, but I don’t think the demonstrations themselves could have moved the wall one inch, and I don’t think litigation alone could have moved the wall one inch. The combination of the two made it such a powerful campaign that was eventually successful.

I cannot live in Israel and do something else. It’s impossible for me. I need to fight against what I see as wrong and unjust. It sounds corny, but this is what I really think. It’s also my deep feeling that Judaism and Jewish values are being abused. It aches me to see how, in the name of Judaism, things that are the exact opposite of everything that the Jewish tradition and collective biography stand for exist.

Do you ever wonder if your work legitimizes the occupation by working for change from within the Israeli legal system?

There is a mighty price to be paid when fighting human rights abuse in the institutions of a large-scale human rights abusing regime. You legitimize the institutions of that regime. You pay a   price when you lose in court because you make it kosher. Many people would say that if the Supreme Court says it’s fine, it’s fine. They can sleep at night.

You also pay a big price when you win because you give the regime this mighty public relations tool, which says, look, we have a system of judicial review and there is no arbitrariness because we have judges that examine this. But as a human rights attorney, I cannot neglect the individual. If a Palestinian comes to me and says, “They are going to uproot my olive grove, please help me,” I cannot tell him, look, there is a bigger picture here.

What is the greatest challenge Yesh Din and its legal team faces in promoting their mission?

When we go to court, our challenge is to transcend beyond the security narrative and make the judges see the human agony that is behind the practice or the policy that we are contesting. This is the challenge that lawyers have vis-a-vis the judges and Yesh Din has vis-a-vis the Israeli public.

What has been the greatest legal victory of your career?

If you measure it by the actual change made in people’s lives, then I would say my wall cases. These were cases where I can show you the olive trees that are now being cultivated by people who couldn’t before. This is something that can be measured in square meters of land and in liters of olive oil. At the same time, cases like Migron had a huge impact on public discussion in Israel, on what settlements do to Palestinians and on the legality and immorality of the settlement enterprise.

The same goes for the establishment of settlements and land grabs because in this case the State of Israel is not only incapable, but unwilling to stop these kinds of abuses. What we’ve seen with the European regulations on settlements is the first step of intervention, saying, I don’t want one cent of mine being invested in this illegal enterprise, which is an abuse of Palestinian human rights.

What do you hope Yesh Din will accomplish next?

As long as we are occupying the West Bank, the Israeli authorities will dictate Yesh Din’s next project. It depends on the new policies and practices that they introduce and in that sense our work trying to protect Palestinian rights depends on the type of policies that are being introduced by Israel.