The fabrication of criminal cases against activists, particularly anti-occupation activists, has become an almost routine tool. Every one of us could find themselves the target of a similar right-wing campaign. 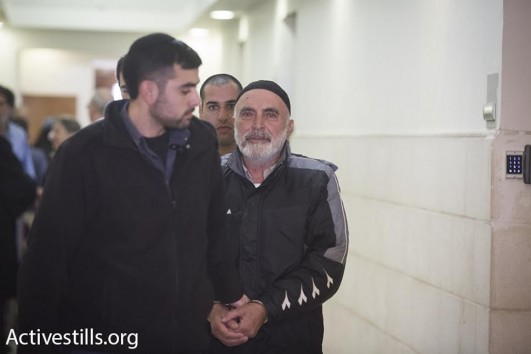 Two years ago, Israeli officials, right-wing activists, and the media put veteran left-wing activist Ezra Nawi in their crosshairs. After an investigative television show partnered with an extreme right-wing organization to target Nawi with a hidden-camera hit piece, Nawi was arrested at Ben Gurion Airport while trying to leave the country. Photos of him being led in handcuffs were published on the front page of every major publication.

He was denied access to a lawyer, a sweeping gag order was issued, and eventually he was released to house arrest. The accusations at the time ranged from accessory to manslaughter, conspiracy to commit murder, and making contact with a foreign agent.

Fast-forward two years and the only thing Israeli authorities are still accusing Nawi of is violating a clause in the “Law Implementing the Interim Agreement Regarding the West Bank and Gaza” — the Oslo Accords.

In its obsessive abuse of Nawi, Israel managed to resurrect the peace agreement it has worked so hard to kill. From the settlement enterprise to laws allowing the expropriation of private Palestinian land to IDF raids in Area A of the West Bank — which Oslo says are supposed to be under full Palestinian control — violating the Oslo Accords long ago became official Israeli policy. But now that they can be used against a left-wing activist, the Oslo Accords have suddenly become sacred. The irony of Justice Minister Ayelet Shaked feigning concern about violations of the Oslo Accords is simply too much.

Nawi’s lawyers, Eitan Peleg and Lea Tzemel, said, following the announcement of the indictment, that a mountain of lies had turned into a molehill. One can understand why they would feel relief. The fervor with which Israeli authorities pursued Nawi made it seem that they would stop at nothing short of his head.

And yet the strange charge against Nawi, a charge for which no Israeli citizen has ever been tried, as well as the closing of the cases against two others arrested with Nawi,  proves what anyone with eyes knew from the beginning: the accusations are baseless and vindictive. This is political persecution.

It is because of this that the inertia with which Nawi’s story unfolded is so disturbing. It went according to a simple formula: from the moment the right publicly identifies a left-wing activist or organization as a target, right-wing organizations and the governing coalition work together to satisfy their bloodlust while accruing political capital along the way.

An entire apparatus of regime informants works to monitor the expressions and activities of left-wing activists and organizations, delegitimizes them in public, and incites violent hatred toward them. What is so dangerous and destructive about this system is that even after the wild accusations end with a whisper rather than a bang, the damage is already done. When clods of mud are strewn, some of it sticks. Even if Ezra Nawi is acquitted, it will be impossible to exaggerate the amount of damage —personal and political — that was done.

On the personal level, the continued abuse has taken a significant mental and physical toll on Nawi, who is 63. Those who knew Nawi before the ordeal know that he is not the same man. The charismatic activist with a sense of humor, who devoted years of his life to defending the most defenseless of Palestinians in the occupied territories, has, since the case against him began, suffered a stroke. His health is in worrying decline. His financial assets, meager to begin with, have dwindled further. 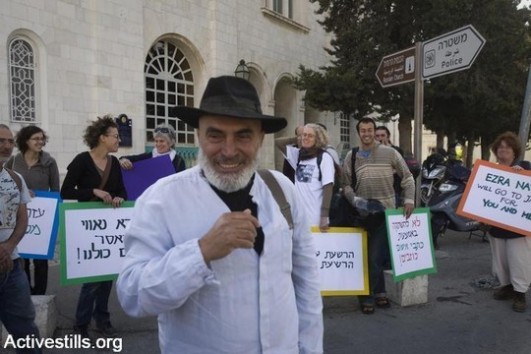 On the political level, the Israeli human rights community has come to understand that it is far more vulnerable to the caprice of both the government and the right than it thought. The fabrication of criminal cases against activists, particularly anti-occupation activists, has become an almost routine tool in the right’s campaign of repression against the left. The symbiotic relationship between the government and the most extreme segments of the right are terrifyingly deep. Even professional and, in theory, reputable media outlets join in the repression of the left for better ratings and to bolster their patriotic bonafides.

While it is important to internalize these facts, we must not let them hinder our struggle against the occupation and for equal rights for all of the inhabitants in this land. The campaign against Ezra Nawi is a reflection not just of the government and the right but of us: more than it saw Nawi as easy prey, the regime saw him as a threat. Nawi proves that even at a time when the power-drunk right-wing government passes anti-democratic laws against left-wing groups and their funders, an activist with just a jeep and a moral backbone can still drive the government nuts.

The lesson of Ezra Nawi’s story is so simple and banal it almost writes itself: we are all Ezra Nawi. When the case against Nawi began, it was disappointing and frustrating to see how certain members of the Israeli left gave him the cold shoulder and, in some cases, even turned against him. We must not let this happen again.

Every one of us could find themselves the target of a similar right-wing campaign. Our answer to this must be solidarity and action. We must stand behind Nawi and any other activist targeted by the right, join the activities of Ta’ayush and other organizations that continue to operate on the ground in the occupied territories despite attempts to silence, intimidate, and break them. The response to every Ezra Nawi in prison or under house arrest must be 10 more Ezra Nawis on the ground. “We are all Ezra Nawi” is not an empty cliché; it the simple understanding that if we cannot all be Ezra Nawi, our political community will cease to exist.