An understanding of the profitable side of the occupation – way more considerable than most people imagine – could force us to change our entire political thinking. 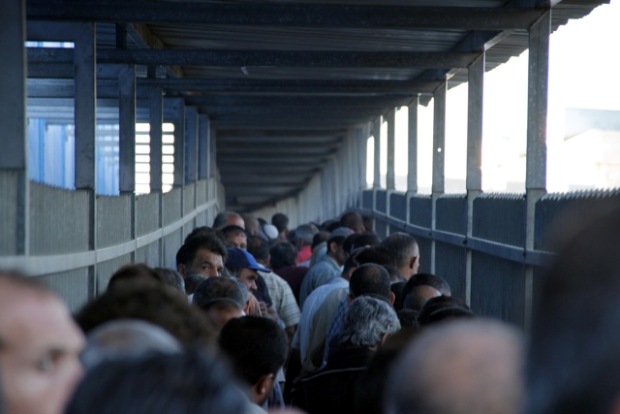 Ami Kaufman (on his +972 blog) and Emily Hauser (Open Zion) join the debate regarding the financial burden the occupation puts on the Israeli economy. As Ami notes, this is something that goes hand in hand with the conversation on J14 (a.k.a the “social justice” protest). Terminating the occupation and the expensive settlement project, the saying goes, would benefit Israeli economy more than any other measure the protesters offer.

As both Emily and Ami note, there is something cynical about this argument: The occupation should be opposed on moral grounds, regardless of how cost-effective it is for Israel. I agree wholeheartedly, and this is the response I usually give to those advocating “the economic argument” against the occupation. Yet I feel a need to address the assumption in Emily’s text (and to a lesser extent, in Ami’s) according to which the occupation represents only a burden on Israel and its economy, as I think it is a part of a larger misrepresentation of the essence of the current status quo.

First, it should be noted that calculating the true cost of the occupation is extremely difficult, since the Israeli budget treats both sides of the Green Line as one unit. Plus, government ministers who were supportive of the settlements – including ones from Labor or Kadima – found over the years ways to integrate allocations of funds to the West Bank into “innocent” budget lines. The Ministry of Transportation, for example, subsidizes bus rides for settlers, making a trip longer than the Jerusalem-Tel Aviv line cost the same as a local bus ride in the Tel Aviv metropolitan area. The Ministry of Education allows smaller classes in settlers’ schools. Settlers comprise the Israeli sector with the highest rate of government employees – and all this without going to direct investments in the occupation, through the department for housing or the Ministry of Defense.

There have been several efforts to estimate the cost of the occupation. In 2011, Shir Hever concluded a study that estimated the annual cost at 9 billion USD – an average of $1,175 for every Israeli. In 2007, several economists gave a price tag of 50 billion dollars for (then) 40 years of Israeli control and colonization of the West Bank and Gaza. The Adva Center for socio-economical studies is doing the most extensive work on this front. While they don’t come up with a “bottom line” figure, their 2012 report had some interesting data (PDF, Hebrew) including the “special budget” the  IDF received for operations in the West Bank between the years 1989 and 2011 – around 13 billion USD (the annual Israeli budget is around 100 billion USD).

But even this partial data is rich compared to the other side of the budget – an estimate of the direct and indirect Israeli income from the occupation.

Nobody could seriously question the existence of such revenues: From the Israeli companies directly involved in excavating and selling natural resources from the occupied territories – the most prominent example being Ahava beauty products (report, PDF) and a recent Supreme Court ruling even allowed mining Palestinian land in order to satisfy the need of the growing Israeli real-estate market – to the captive market the Palestinian represents for Israel (household Israeli brands can be found anywhere in the West Bank and Gaza). Water is one of the much-needed resources in the Middle East: No less than 80 percent of the Mountain Aquifer – located underneath the West Bank – is used by Israel and the Israeli settlements, and only 20 percent goes to the Palestinian population. (The average Israeli’s water consumption is 3.5-times that of a Palestinian.)

Still, the main economic benefit Israel draws from its control over the West Bank is hidden in plain sight – we are talking the most expensive, most desired resource here: land.

As land prices rose in Israel in recent decades, the West Bank became a handy source for new housing projects serving the two large metropolitan areas – Tel Aviv and Jerusalem. New towns for Jews of less affluent background– especially, but not exclusively, the Orthodox – were built east of the Green Line. In the 1980s most of these projects were built northeast of Tel Aviv, near Qalqilia (“5 minutes from Kfar Saba,” the ads were declaring); the last couple of decades have seen rapid developments in the southeast, near the Modi’in area and highway 443. Parts of the West Bank literally became the new suburbs of Tel Aviv.

The last zoning plan that had Jerusalem expanding to the west was scrapped (also due to environmental reasons – trees are apparently more important that Palestinians); and with very few exceptions, Jerusalem is also expanding north, east and south, almost exclusively beyond the Green Line. Currently, half a million Jews live in the occupied West Bank, many of them in government-subsidized projects in the Jerusalem area. One could only imagine the cost of the same projects if they were to be located in proper Israel, especially if the proximity to the metropolitan centers was to be kept.

The control over Palestinian land has many more economic benefits which I won’t detail here. Think for example of the highways traversing the West Bank, while serving Israeli traffic outside it: Road 90, the north-south highway running along the Jordan River; Road 1 (east) from Jerusalem to the Dead Sea, and Road 443, which serves as the much-needed alternative to the constantly-jammed highway connecting Tel Aviv to Jerusalem. Imagine the cost if we had all the yellow license plated Israeli cars going on long detours west of the Green Line instead of using these roads, or if the Palestinians were allowed to collect tolls on those roads. And that’s but one aspect of control over land. The bottom line is that the control over the West Bank, East Jerusalem and to a lesser extent, Gaza, has substantial value to Israel, one that might even surpass the economic burden posed by the occupation.

The lack of a debate on the benefits of the occupation prevents, I think, a better understanding of the forces at play in this conflict. It could explain, for example, the expansion of settlements that went hand in hand with the Oslo Accord. In the early 1990s, land and real estate prices in Israel skyrocketed because of  immigration from the former USSR. One solution Israeli governments – including dovish ones – turned to was the West Bank, but by doing so they were undermining their own effort to separate the West Bank from the rest of Israel. It is also no coincidence that Palestinian resistance erupted in places like Bil’in or Ni’lin, whose land was confiscated for those very same projects, or that the ultra-Orthodox population that was sent to populate those houses is moving further and further to the political right, becoming almost one with the settler movement. Another important example is the Gaza blockade: As this expose in Haaretz showed, the logic behind the decision about which goods will be allowed into the Strip includes many economic considerations, ones that serve the needs of Israeli farmers and manufacturers. Yet we never hear about the way the blockade serves Israeli economical interests, only about the security needs.

Still, there is an even deeper level of meaning to the denial of the profitable aspect of the occupation, one that has to do with the way Israelis – even from the left – conceptualize this conflict: Ignoring the benefit to Israel from the occupation serves to blur its colonialist nature.

Understanding the occupation as a burden helps portray the current state of affairs as “a tragedy” in which both people are caught, while hiding the connection between the political persecution of the Palestinians and their economic exploitation (cheap labor is another “benefit” of the occupation which I didn’t discuss here). We are repeatedly told that the colonial theory, or even elements of it, couldn’t be used to explain the nature of Israeli control over the West Bank, and the cost of the infrastructure Israel has built in the occupied territories serves as proof. But colonialism always requires expensive infrastructure, which doesn’t mean that it couldn’t serve other sectors or interests of the occupying society rather well.

A third reason for ignoring the profitable side of the occupation is the implications it has on the legitimacy of sanctions against the entirety of Israeli society – a notion that even leftists (like myself) find very hard to swallow.

It’s not always enough to oppose the occupation – one needs to understand its appeal as well. I have written in the past on the Israeli addiction to the political status quo, especially on the Palestinian question. I think that an honest analysis of the cost and benefits of Israeli control over the West Bank would support the notion that the occupation represents an Israeli interest, and therefore would never come to an end as a result of an internal Israeli process alone.

Check it out: Who profits from the occupation?