This article was jointly written by Dahlia Scheindlin and Joseph Dana, based on our shared experiences of the protests. 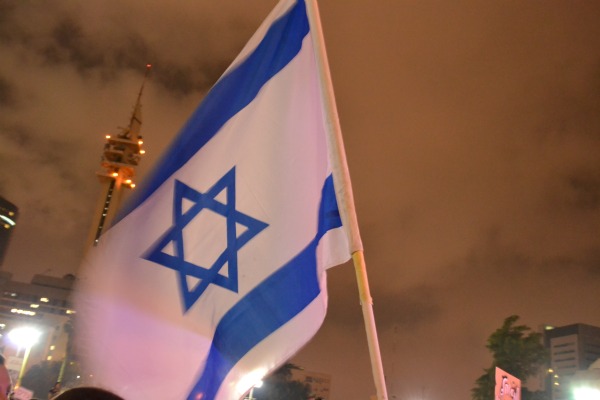 The popular, mass protests here that began as a cry of rage against housing prices have evolved admirably into a public outcry against a slew of deep-rooted problems in Israeli social and economic life. Visiting the tent camps early every day, we’ve watched the protest grow from a motley band of wishful Woodstockers at the tip of Rothschild Boulevard two weeks ago, to a sort of mini-metropolis spreading close to the end of the road. There’s a first aid tent courtesy of Physicians for Human Rights, “Settle the Negev and the Galil” tents, ideological discussions, guitar and drum sing-alongs, Kabalat Shabbat, Friday night dinner, outdoor films about revolutionary themes, families with babies, and endlessly creative slogans. There are tents down near the central bus station, in a cat and mouse game with the municipality, which is trying to break up their camp.

Every grievance is coming out: there are slogans against the huge concentration of the country’s wealth into the hands of a very few, slogans raging against enormous economic gaps between rich and poor in Israel, lists of demands for just resource distribution and for various elements of a welfare state, salary hikes and lower costs, better education conditions and health care; against the national housing committees law, against the government, for Tahrir. At 10pm on Friday night, when a song group spontaneously burst into chants of “The people! Want! Social Justice!” one young woman sang out beatifically, “The people! Want! All Sorts of Things!”

Many are saying that this is something new, especially after Saturday night turned into Israel’s largest-ever social protest, as Maariv’s print headline proclaimed. A new language is being developed: silent hand gestures replace Israeli shouting matches. The hyper-fragmented groups in Israel are listening to each other, hammering out common ground to combat shared economic desperation.

Just don’t mention Israel’s occupation of the West Bank, or even the neutral local euphemism “medini” [lit: political/diplomatic] issues. Just leave out the institutional inequality most Palestinian citizens of Israel experience here – inequality of other groups is welcome.

I learned this the hard way. After a number of conversations with protesters, including some of its organizers (the protests are actually notably non-cohesive) – it became very clear that one of the top strategic goals is to avoid being branded as “left.” Joseph feels the environment around this topic is so toxic, he has tried to avoid even raising questions about why a ‘social justice revolution’ does not address the inequality of all those living under Israeli control. Even soft questions are met with hard responses from many who passionately demand that the protests be given time, space and compassion to grow inside Israeli society.

In this revolution, strategic thinking says that the current government can delegitimize the protest by making it look like lefties. The whole country will believe the government, because everybody hates the left. Indeed, the Prime Minister tried just this, branding them left-wing rabble rousers in the very first week. He failed – perhaps because of the revolutionary success in focusing on social issues only.

If the protests are labeled “left,” in revolutionary thinking, then ergo they are either – a. a conspiracy to overthrow the current government by opposition parties or groups (which somehow delegitimizes the policy goals), or b. a conspiracy by anti-Israel leftists to tie everything back to the occupation and force this or any government to cave in to the Palestinians. The revolution is too important to be branded.

Anyway, as a young woman in a long skirt and a sweet smile pleaded with me at 1am on Friday night, the Israeli-Palestinian cause is a different struggle. Why do I have to bring it to Rothschild?

As a political strategist, I can understand that with such deep divisions, perhaps we need to take baby steps toward an unprecedented effort – driven by citizens, not well-meaning NGOs – to unite where we can agree, before touching on the most sensitive problems.

But the mantra of avoiding “medini” is wearing thin.

On Friday, some protesters hassled other Palestinian protesters, citizens suffering from housing crises. It came to scuffles. The diminutive Palestinian flags they hung were removed. Joseph recalls the struggles against apartheid in South Africa and Jim Crow south. Can we imagine the ruling classes there demanding “social justice” without addressing their gravest internal injustices? What does the term “social justice” mean if so many who don’t have it are left out? Sure, let’s protest exorbitant housing costs – but why call it “social justice” if the very crux of social justice, namely equality, is not addressed? Can Israelis have a social justice revolution without speaking about the rights of people they control and occupy?

Later still on Friday night, one of the organizers told me that if I were to raise these kinds of issues, specifically ‘medini’ I would be thrown out of “his circle,” of people or tents. Why? “Because the only war is a class war,” he said, as if he had just recently skimmed the cliff-notes.

“But why shut people’s mouths who do want to talk about this?” I asked. “After all, if everyone is here to speak his/her mind, why is one topic – and such a huge, relevant one – not legitimate?” The answer was a fumbling, “this is a different struggle.  You can take that struggle anywhere else.” I believe they are the same struggle, I argued, or at least inextricably linked. It’s not a radical view – heaven help me, former Chief of Staff and now Kadima front-runner Shaul Mofaz made this very same point repeatedly in a Channel 2 television interview minutes before the rally on Saturday.

I tried to explain that they don’t have to agree, but to allow people to make any points they choose. “It it isn’t very democratic not to let people speak,” I retorted, getting frustrated.

“But democracy isn’t our struggle!” was the response.

And this was where I was left momentarily speechless. Here’s what I would have wanted to say:

1. Without a resolution to the Israeli-Palestinian conflict that determines final borders and full civil, human and national rights for all people between the Jordan and the sea, Israel’s budgetary and resource allocations will always be wildly distorted and harmful.  We will forever worship the military and its disciples, and privilege them with the best opportunities, perpetuating social and economic inequalities. We will never feel secure in our Jewish identity as long as the conflict is not settled – therefore, we will forever try to impose it on all, or exclude others however possible – including in housing policy. Once we do this against one group, we can do it against any group. Social and economic priorities will never dominate in national elections because security and defensiveness will reign supreme. The parties most committed to social justice and equality (not coincidentally, these parties are left-wing on conflict-related affairs) are unlikely to win power.

2. Without total freedom of all people in this ‘revolution’ to speak about all possible solutions to social and economic problems, there will be no true opening of minds and a great opportunity will be lost. The revolution will slowly begin to mirror the present, self-censorship will prevail, to be followed by the closing of minds and eventually the closing of democracy. The new language of civilized discourse will be wasted: It’s nice if we can cross our arms silently and respectfully to express disagreement over details of housing policy, on which most of the protestors largely agree. It’s useless if we can’t cross our arms silently and respectfully to talk about the most painful divisions – in that case, we can expect more of the same.