There is nothing wrong with inviting those who resisted Rabin’s policies to speak at the rally in his memory. But they need to answer one fundamental question first. 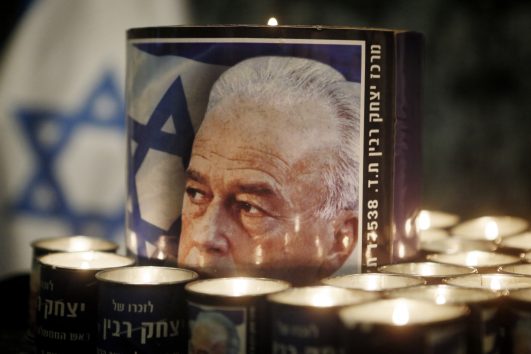 Every murder is terrible in its own way, but political murder is uniquely terrible. Political murder—for example, the assassination of an elected leader—erodes the legitimacy of democratic rule and aims to replace the authority of the people with a different authority: that of an ideology or theology belonging to an individual or particular group.

The murder of Prime Minister Yitzhak Rabin is significant not only because of the wave of incitement that led to it, or because it effectively halted the Palestinian peace process, but because it thrust into conflict two competing forms of authority: that of the people in a democracy, and that of a particular group, in this case a certain strain of Judaism.

Thus Rabin’s murder raises a crucial question, one that should be at the core of any rally staged in his memory: is there one system of law in Israel or two? In other words, does halakha (Jewish law) decide matters of life in death in the modern state of Israel? Or, put differently: in the case of a conflict between the laws of the elected government and religious law as it is interpreted by certain rabbis, must all citizens respect the state’s monopoly on the legitimate use of violence?

To clarify, this isn’t about small violations of the law; we all drive over the speed limit. This also isn’t about conscientious objection or non-violent civil disobedience, though these practices have an important role to play in any democracy and should be defended. And, of course, the same is true for protests and demonstrations.

This is about the subversion of an elected government and the erosion of democratic rule by an act of terror or political violence committed against a democratically elected government, or against citizens belonging to a specific political camp. For when an act of terror or political violence is committed on the basis of ideology, it undermines the state’s authority and the legitimacy of the democratic process.

Yigal Amir acted on the basis of an ideology—or, perhaps more accurately, a theology—when he planned and carried out the murder of Yizhak Rabin. According to his own testimony, he wanted to halt the peace process, which he viewed as dangerous not only to individual lives but to his vision for the State of Israel and the Land of Israel. The question of whether Amir acted, directly or indirectly, under the halakhic instructions of a particular rabbi is interesting but less relevant here. The evidence is murky, though it is certainly possible that he acted alone or without halakhic instructions.

What is important is that he acted on the basis of an ideology that denies the ultimate legitimacy of democracy. Ideologies of this kind could certainly be found in Israel then — and they still can be today. Indeed, in the lead up to Rabin’s murder there were discussions of different halachic justifications for political murder. There were serious debates about din moser and din rodef—law of the informer and law of the pursuer, two categories of halakha that some believe permit extra-judicial killing.

Here is just one example, taken from an open letter authored by rabbis Dov Lior, Daniel Shilo, and Elazar Melamed, which was addressed to tens of other rabbis in the months before Amir shot Rabin:

What is the proper sentence for this evil government and its prime minister? Should they be considered accomplices to the murders committed by terrorists […] According to the halakha, could they be put on trial, and what would be their punishment if they are considered accomplices to murder […] but the most difficult question is, according to the halakha, what should be the sentence for this government if it continues to carry out the agreement regarding Judea and Samaria.

Here, we can clearly see an entire ideological apparatus with its own system of law that runs parallel to, and even supersedes, the laws of the state. We see a serious discussion of whether according to that parallel system of law it is required to censure or punish the government and the prime minister. This is the core of the matter: the adoption of a parallel system of law that can hand down sentences instead of the state, according to which the government is deemed acting in violation of its precepts. 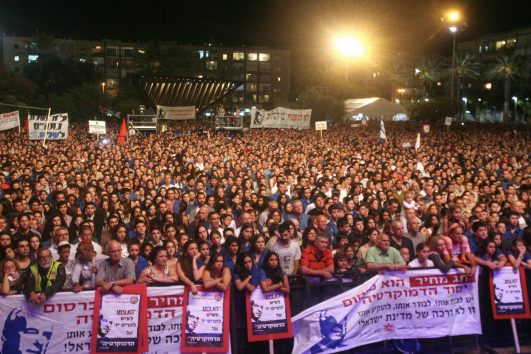 To return to the important question after Rabin’s murder: is there one system of law in Israel or two? Again, this is not about individual people, who ascribe to all kinds of different ideologies. Ideological diversity is not only legitimate but important in a democracy. Instead, this is about the legitimacy of democratic rule and the serious discussion of whether a democratic government can be put on trial under a competing system of laws—in this case, the laws of the Torah.

There is nothing wrong with inviting those who resisted Rabin’s policies to speak at the rally in his memory. We all agree—dialogue and unity are good things. However, those who opposed Rabin must, perhaps before they take the stage, answer the following question unequivocally: do they accept the democratic framework as the ultimate, legitimate framework within which we deal with our disagreements and settle debates over politics and policy?

Until we answer that question, we haven’t truly dealt with what happened 22 years ago.

Dr. Tomer Persico is a Research Fellow at the Shalom Hartman Institute in Jerusalem and teaches at the Department for Comparative Religion in Tel-Aviv University.