A few years ago, a far-right commentator on Israel-Palestine coined the term “Pallywood” to describe video clips and photographs which were allegedly staged or manipulated to score public relations points against Israel. The term is now quite widely used by those who take an uncritical Israel-advocacy position. People who subscribe to the Pallywood theory believe that Israel is the true victim in its conflict with the Palestinians. Israel’s only real wrongdoing, they claim, is in its failure to combat effectively what they perceive as a relentless media battle waged by Palestinians and their advocates. What Israel needs, they say, is better hasbara.

But the far-right – those who call the occupied territories the ‘administered territories’ and insist that Israel must keep its settlements in the West Bank – are not the only ones who claim that images of clashes between Palestinian demonstrators and Israeli security forces are staged. Sometimes, people who do not have a personal stake in the conflict make the same claim. These are intelligent, sensible people who visit Israel-Palestine, observe the situation for a short time – but do not study it or investigate it – and then draw their conclusions.

Recently, two young journalists – one Italian and one from the United States, created video reports about what they saw at clashes between Palestinian protesters and Israeli security forces. In these video reports,  news photographs and video clips are juxtaposed alongside images that show the same scenes from a wider angle, so that they include a scrum of photojournalists madly clicking their shutters in the direction of a single teenage boy with a keffiyeh wrapped around his face and a chunk of rock clutched in his hand, while a tyre burns in the background. The implication is that these images are, if not exactly staged, then manipulated. If the photographers and videographers were not present, they suggest, these clashes would not happen. This claim leads, of course, to the next one – ie, that if these scenes are staged, then they must be inauthentic.

But there are a few questions that are not asked by these journalists – or by those who have enthusiastically posted and re-posted their videos. Questions like, Why are these Palestinians out demonstrating in the first place? Why do they come out, week after week, to face Israeli security forces who choke them with tear gas, beat them and arrest them? What are their grievances?

Well, for starters, how about checkpoints, land confiscations, arbitrary arrests, military trials that are effectively kangaroo courts, arbitrary beatings at the hands of Israeli security forces and settlers, a life without civil rights or legal recourse, night raids by the army, destruction of water cisterns, destruction of homes, no freedom of movement and… Oh, come on. If you know anything about the occupation, then you know all this. If you are an intelligent person who is interested in Israel-Palestine issues and you don’t know all this, then you don’t want to know.

Do teenage boys wearing jeans and muscle shirts swagger and act all macho when a bunch of photojournalists point big lenses in their direction? Yup, they do. Do they sometimes make a mockery out of stressful, frightening situations in order to preserve their dignity, their cool and their street cred? Sure. Does that mean they have no reason or purpose in demonstrating? Of course not. Would the same people demonstrate if there was no media presence? Yes. I know, because I have attended many demonstrations from which the media was completely absent, and events unfolded in pretty much the same way as they do when the photographers are there.

Neither of the two video reports, which are embedded below, include any background or explanation.  They also don’t really touch on the fact that very few of the photos and videos shot at these demos are ever published. Editors are not interested anymore. Their readers have turned away; Israel-Palestine is regarded as a story that is stuck in Groundhog Day, doomed to repeat itself in perpetuity.

But once in awhile there is an egregious incident that is deemed newsworthy. And if a persistent photojournalist or videographer who has been attending these demos every week for years happens to be there, s/he could have the shot that will make the front page or win a prize. But rarely – almost never – will you see a print or television journalist at these demos. Because they are not reported. Because hardly anyone cares anymore. 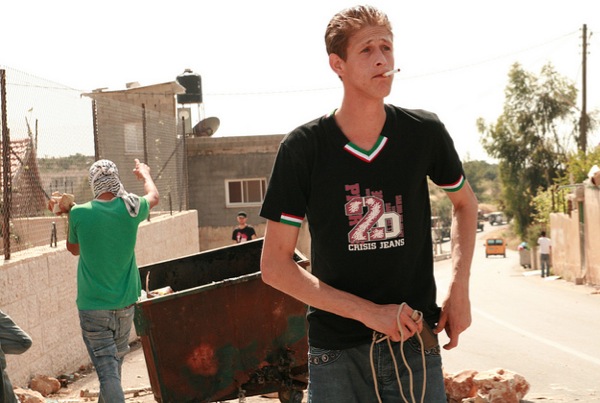 I photographed this Nabi Saleh boy in May 2010. I believe he is in jail now

Below are the two video reports – the first is by Andy Lampard, a journalist from the United States; and the second is by Ruben Salvadori, an Italian photojournalist.