By calling the Palestinians Nazis, the Israeli prime minister was saying they can never be negotiated with — that Israel must fight them to the bloody end. 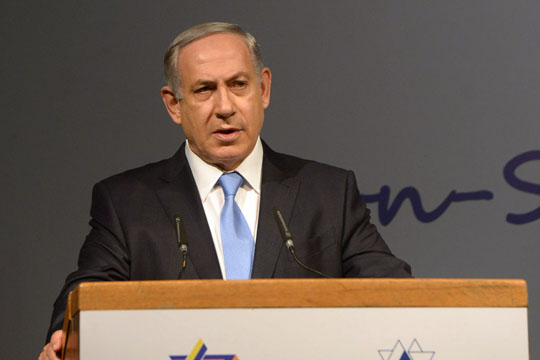 Despite the festival of mockery taking place on social media, Benjamin Netanyahu clearly does not believe that Grand Mufti Haj Amin al-Husseini is more responsible than Hitler for the Holocaust. (Although that is exactly what the prime minister said in his speech at the World Zionist Conference on Tuesday.) Netanyahu is a smart guy who knows World War II history better than most of his critics. The idea that the mufti is responsible for the extermination of European Jewry is completely absurd, and Netanyahu knows that. Just like he explained the next day, he wasn’t even talking about the Nazis, and he certainly never meant to absolve them for the Holocaust. The prime minister was trying to make a statement about the Palestinians and that’s the real problem.

Saying that the Palestinians are Nazis — very much like the comparison between Israel and the Nazis — has no place in a fact-based or historically accurate discourse. That should go without saying. The only reason to do so would be to illustrate that it is impossible to negotiate, or even speak with, the other side — that they must be fought to the bloody end. That is the historical historical context and significance of comparing somebody to the Nazis. They are one of the few regimes in all of history whose illegitimacy is absolute — to everyone in the world. Even those who had the most remote ties with the Nazis, even those who tried to make deals with them to save Jews, were later classified as traitors. Because one wages only war against Nazis. Look at every WWII film ever made — there is no such thing as a good Nazi.

The Palestinians, of course, are not Nazis. Their resistance to the establishment of Jewish settlements in Palestine in the first half of the 20th century is similar to the resistance of nearly every indigenous group to European settlers who arrived in their lands. The fact that the Jews felt they had no other choice and were being persecuted, the fact that they believed this was their homeland, that changed nothing for the Palestinians. It may unpleasant, but it’s also not incomprehensible.

None of that applies to the present reality, however. Excluding Gaza, more than 10 million people live under Israeli sovereign rule today. Four million Palestinians and 6 million Jews. If you count Gaza, the numbers are almost even. These populations are completely intertwined almost everywhere in the whole territory. And since nobody is going anywhere, the fundamental political question is how can we live together? 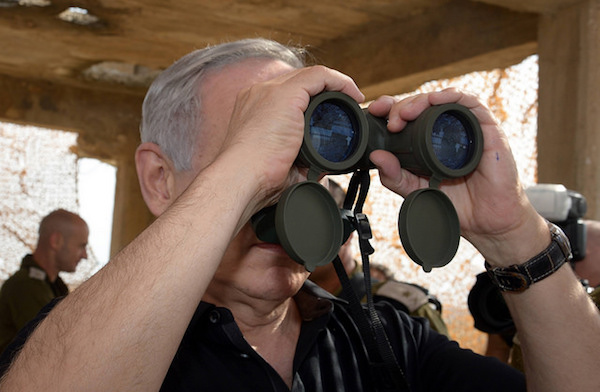 Prime Minister Benjamin Netanyahu looks through binoculars toward the Gaza Strip during a visit to an army base in southern Israel, October 20, 2015. (Haim Zach/GPO)

Netanyahu rejects the premise of that question. He talks of total war. Of Nazis. And when it’s not Nazis it’s Islamic State, another group the entire world agrees must be completely eradicated. In that regard the Israeli prime minister is reminiscent of his father, who said in a 2009 interview (Hebrew) that “the Arab enemy is so difficult because his tendency is toward conflict is part of his nature. Enmity is part of his personality and character. That is the personality of the Arab, that he is not willing to reach compromises or agreements. It doesn’t matter what level of resistance he meets or what price he is forced to pay. His existence is that of permanent war.” In the same interview, Netanyahu the elder proposed seizing as much territory as possible, holding onto it by force and levying collective punishment — such as withholding food to entire cities and cutting off electricity and education — on all those who resist. He said even worse things that didn’t make it into print.

Luckily for us, Netanyahu may have inherited his father’s worldview but he didn’t inherit a plan of action. He is a more measured and level-headed person. We’ve had political leaders in Israel who were much more prone to jumping straight into military operations and collective punishment than Netanyahu. But no leader, certainly not in recent years, has spoken like Bibi. Nobody else speaks in such abstract, absolute terms — of a world defined by total, uncompromising war between Jews and Arabs. Definitely not since Menachem Begin.

If the Palestinians are indeed Islamic State or Nazis, Netanyahu would be insanely irresponsible for advancing any kind of arrangement or agreement with them. If they were ISIL or Nazis, even living as neighbors in the same building with them would be putting lives at risk. Netanyahu’s vision amounts to perpetual civil war. Netanyahu’s famous military cautiousness isn’t worth anything as long as he continues poisoning relations between Jews and Arabs, and as long as he is advancing a vision in which Jews are the frontline in a global war against Muslim civilization. The frontline, remember, is pulverized and destroyed before anything else.

Benjamin Netanyahu’s “mufti speech” was not delivered in a vacuum. It comes in the midst of the worst deterioration of relations between Jews and Arabs inside the Green Line since October 2000. And Netanyahu is no observer on the sidelines. He is the prime minister. His exegeses and commentary help shape the world around us.

There is also another way of looking at things. The situation is very, very bad but it is not irreparable. Violence is taking place here and there, but millions of Jews and Palestinians are going about their lives. Anxious and suspicious, but going about their lives. This is not Syria. It is not a religious war. It’s important to look around every once in a while and remember that. There are no Nazis here.

The conflict is still taking place in a political framework, a framework over which Israel still has control. The vision of living together — in two states, one state or a confederation — has not vanished. The problem is that for Netanyahu there is no such vision. There are only Arabs in droves. There is Islamic State. There are Nazis. And a prime minister’s speech carries weight and has dramatic influence over the world.

A version of this article was first published in Hebrew on Local Call.