The problem is not that Israel releases Palestinian prisoners, but how few it releases. 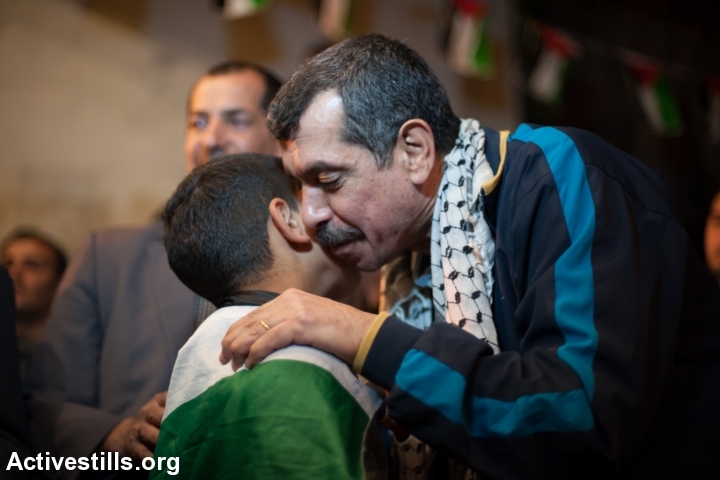 Israeli newspaper Yedioth Ahronoth gives its readers a daily question, argued by two competing op-eds. On Monday, the question had to do with the coming release of Palestinian prisoners as part of the government’s commitment to Secretary of State John Kerry. Journalist Merav Batito wrote in favor, while Hagai Segal was against freeing terrorists; readers were asked to vote on Facebook.

Segal knows a thing or two about the issue — he is, after all, a released terrorist. In the eighties, Segal was part of what was later called “The Jewish Underground.” He himself took part in an attempts to assassinate Palestinian mayors with bombs. Anther cell murdered three students in Hebron and injured dozens in an attack on an Islamic college, while others planned to bomb the mosques on Temple Mount. The public learned of the Jewish Underground when the Shin bet caught some of its members placing bombs under Palestinian buses in an attempt to conduct a mega-attack that would have killed dozens of civilians.

Most of the underground’s members received light punishments or were later pardoned — even the convicted killers among them spent less than seven years in prison — and one of the them later became the head of the Yesha Council, the main settler political organization. As the cliché goes, one man’s terrorist is another’s freedom fighter.

So cries of protest against the decision to release 26 prisoners who spent more than 20 years behind bars – the common punishment for murder in Israel – are not a matter of principle but of politics: the Right has no problem releasing murderers, only releasing Palestinians.

And that’s the heart of the matter: at any given moment, Israel holds thousands of Palestinians in its prisons, many of them serving long sentences for light offenses like throwing stones or political activities against the occupation. Dozens to hundreds (and occasionally, thousands) are held in administrative detention for months and years, without ever being charged with anything.

The imprisonment of Palestinians is not an issue of law and order, nor is it even part of the fight against terror as most of the Israeli public is only too happy to believe. Rather, it is a part of the military dictatorship Israel installed in the Occupied Territories, a place where: there are no civil rights; there are no civilian trials, only military tribunals run by prosecutors and judges who wear the same uniforms; there is no freedom of movement; there’s no right to protest or to conduct any political activity without the army’s permission, and more.

Dictatorships do not allow space for legitimate political activity. Opposing them means breaking the law. This is why dictatorships have prisons full of political prisoners — and the Israeli prisons in the West Bank are no different. The Hebrew term used in the media to describe them, ‘security prisoners,’ was invented to disguise the fact that these are political prisoners whose main sin was the opposing the occupation, at times using unarmed means that wouldn’t make them qualified to join the leagues of terrorists like former Israeli prime minister Yitzhak Shamir or Nelson Mandela.

For every prisoner Israel releases it locks up at least another one. This is the real revolving door in place, thanks to which hundreds of thousands of Palestinians have seen the inside of an Israeli lock-up facility.

Because the mass detention of civilians is an inherent part of the occupation, every person who opposes the occupation needs to call for releasing prisoners, no matter how unpopular that might be with the Israeli public. The problem is not that Israel is releasing Palestinian prisoners, but that it releases so few of them.

Originally published at Time Out Tel Aviv in Hebrew.