By calling on France’s Jews to move to Israel, Netanyahu is promoting a worldview in which there is no national conflict, no occupation and no Palestinian people. There are only Jews and radical Muslims. 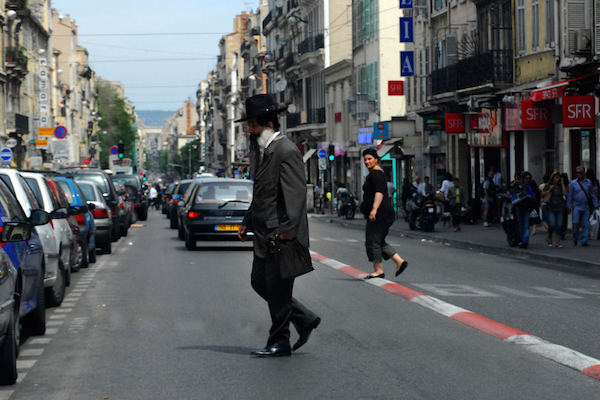 Illustrative photo of a French Jew. (Photo by ChameleonsEye / Shutterstock.com)

The terror attacks in France have caused Netanyahu to, once again, conflate his role as prime minister with his imaginary role as supreme leader of the Jewish people, and call on the Jews of France to immigrate to Israel.

Strange. The leader of a country that is constantly in a state of war, and that every few years actually goes to war, is imploring France’s Jews to leave their country in the wake of two terrorist attacks (one of which was not directed at a Jewish target), and move to Israel. Even if we ignore the downright chutzpah of his demand vis-a-vis the French government (try imagining a leader of a Western state calling on Israelis to immigrate to his country because of the security situation in Israel), no one doubts that French Jewish immigrants will be in much greater danger living in Israel. Perhaps our foreign minister would do well to update Netanyahu on the travel warnings issued fairly often for our country?

I doubt that Netanyahu’s suggestion to France’s Jews is enticing when considering the economy: while the poverty level in Israel has grown to 23.5 percent, France has been able to reduce poverty to around six percent. Netanyahu is inviting French Jews to immigrant to a place where every third child lives in poverty – where the poverty level is almost four times that of their home country.

But beyond matters of security and economy, immigration of any kind is an extremely delicate process – both socially and psychologically. In fact, it is so delicate that I cannot fathom how glibly Netanyahu has allowed himself to call on people to leave their home. This week marks 36 years since my family’s immigration to Israel from Iran. According to Israeli parameters, we are seen as a successful aliyah story. However, not a day goes by in which I’m not painfully aware of how we were torn from our home, from our language, our most intimate cultural codes — and how those deep scars remain with my parents to this day. How dense does one have to be to arrogantly call on people to just cut off their past?

On the face of it, Netanyahu’s call is so baseless that it forces us to look for the real incentive being offered to France’s Jews. What could possibly convince them to leave and move to a country facing poverty, war and corruption? Why move to a country that is being torn apart by internal conflict – one that is seen as a pariah in the eyes of a growing number of countries around the world? Why move to country whose belligerent actions are partially responsible for the growing lack of security among Jewish communities in Europe and other places?

I can think of one incentive alone: the privilege of formally being placed above the Muslim other. To have the right to live in a country that prefers you simply because you are Jewish. And even if you have never set foot here, this state will grant you privileges over its non-Jewish residents who have lived here for generations. Netanyahu is actually saying: in France you are a weak Jew – vulnerable and under attack. The Israeli experience will provide you with a uniform and a flag, in whose name you can rule as masters.

Considering the vulnerable and anxiety-ridden situation of the Jewish community in France, this is indeed tempting.

Muslim presence in Europe, and the never-ending discussions surrounding its potential dangers, play right into the hands of Netanyahu, who seeks to strengthen the simplistic worldview that puts Jews in the position of eternal victim – whether of new-old anti-Semitism or radical Islam. Strengthening this perspective serves Netanyahu in two ways: when he speaks directly to the Jews of France (the prime minister is surely not blind to the political potential of securing their votes as future citizens of his country), as well as in the local context. There is nothing more effective for Bibi than lumping together all the Jews in the world and presenting them as a united front against “the threat of radical Islam,” thus conflating Islamic State, Hamas and Iran. This helps Netanyahu promote a worldview in which there is no national conflict, no occupation, no Palestinian people and no blatant disregard for human rights. There are only Jews and Muslims. Turns out we look a lot better fighting a religious war than we do running an occupation.