facebook twitter email link
Palestinian Israeli author Odeh Bisharat addressed the 300,000-strong rally for social justice in Tel Aviv on Saturday. This is the full text of his speech. 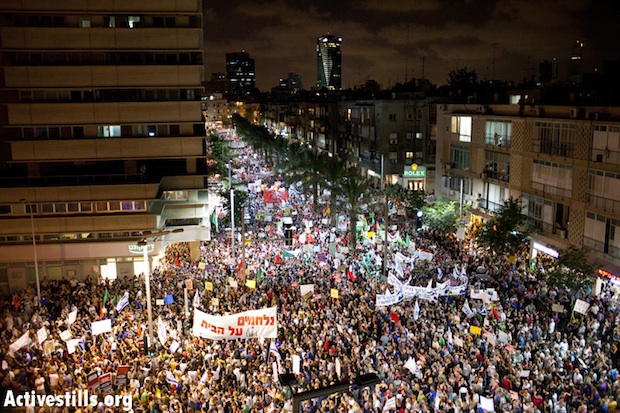 Hundreds of thousands rally in Tel Aviv on August 6. Photo Oren Ziv Activestills
One summery day‪,‬ a revolution began in Israe‪l. The revolution of the young.
‬
In July. The sweet, contagious innocence defeats all the sophistication.
One morning, a young man or a young woman got up.
A young man or a young woman who took no account of the complexities of politics.
Who didn’t care what the coalition would say, or what the opposition would say
Who were unmoved by opinion polls,
Who weren’t captivated by popularity ratings
Who didn’t ask for the opinion of the tycoons padding the war chests of the parties at a election time.
On that morning, a young man or a young woman got up and said: Enough. No more.
And that “no more” is echoing across the country, from the west to the east, from the north to the south.
Ladies and gentlemen: This is how revolutions happen. They creep up silently and then burst forward like a flood.
And this is how the glorious revolution of the young is happening.
Long live the revolution of the young.
Only a short while ago, gas stations were jammed with vehicles. The drivers competed head to head on getting one more litre of cheap gas before tomorrow’s price hike.
Only a short while ago, the lust of “me” ruled supreme at the crossroads, elbows worked overtime. And selfishness was a desired product on the market.
The revolution of the young had come to say: No more.
Just minutes before the revolution we were being convinced that we live in an economic paradise and that the economy survived the global crisis.
Really?! If the economy’s so up, how come we’re so down?
Now it turns out that the financial reporting was just like a school principal that allows only five out of forty students to sit the matriculation exams and then takes pride in having a hundred-percent success ratio:
Everything is glorious for the tycoon, and no one even visits the backyard of the state.
A few years ago, Netanyahu – then finance minister – destroyed the welfare state and told us proudly the economy was as high as it gets. This is what they mean when they say “the operation was successful but the patient died.”
And so, in a sauna of warmth and humidity, the July miracle came to be, and the “dead patient” came to life. The dead patient, it turns out, is alive, and kicking, and when he kicks, it hurts.
At Tahrir square, at their protest that astounded the world, just like here the people were being convinced that there’s no other way: Either a corrupt dictatorship or religious fanaticism.
And here we were being told there’s nothing to be done: A government rises and a government falls, but the tycoons keep laughing all the way to the bank.
Only at the last possible minute did someone dare to ring the alarm bells.
These were the young people on Rothschild, who inspired hearts with the hope for change.
The Arab population, well versed in suffering and struggle, has much sympathy for what is going on here.
Its heart was always captivated by the struggle against exploitation, wherever it took place – whether in Tel Aviv or in Homs, in Tripoli or in Musrata.
The state not only didn’t build in the Arab community. Quite the opposite- the state demolished.
Visi Lod, visit the Triangle. Visit the village of Al-Araqib, demolished twenty-eight times.
The Arabs are struggling for the recognition of the unrecognised villages. For a solution for the housing shortage of Arab citizens in Jaffa. Against the demolition of houses and the expropriation of lands.
It’s time for this struggle to the be struggle of all those being exploited, Jews and Arabs.
It’s time for the warmth of this beautiful struggle to melt away the alienation between the two peoples. When Arabs and Jews refuse to be enemies.
An ancient Arab poet said, “and maybe you have a brother not born of your mother.”
And so in the struggle for social justice, for equality, for peace and fraternity, we are all united.
Wonderful audience, the revolution is just beginning.
When we, for the first time, break through the borders that lock us into tightly closed circles,
When I look at this wonderful audience,
When Arabs and Jews are together,
When the secular and the religious are together,
When the young people of the village and of the city are together,
Then this revolution has but one way:
The way to victory.