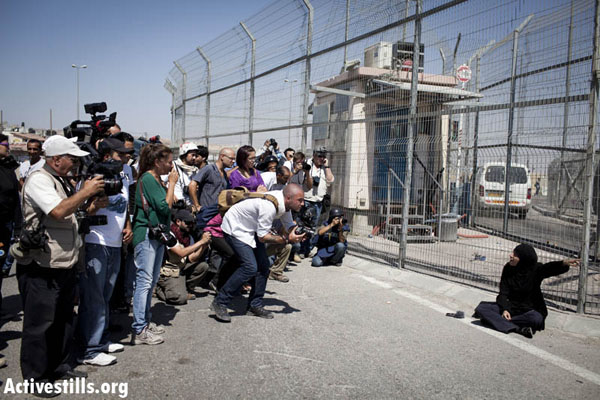 Media at a Qalandia checkpoint demonstration on 17 September 2011. Photo by Oren Ziv/activestills.org

The non-violent approach [Abbas] emphasized in his speech is the revolution of political, cultural and moral identity the Palestinians have undertaken. Many have asked if they are inspired by the Arab Spring and I think the answer is a resounding and joyful yes. And if the victims of Syria, Egypt, Libya and Yemen inspired the Palestinians to save lives by avoiding violence – while contributing to the creation of a peaceful Palestinian state – the tragedy of their deaths will have a sacred meaning far beyond their borders.

Yes. Dahlia’s point is a powerful one.  Non-violent Palestinian resistance is a real thing which has the transformative power to radically challenge the established narrative of the Israeli-Palestinian conflict. With the proliferation of social media, Palestinian activists have a clear opportunity to change the way we understand the conflict. They are able to reformulate our understanding from a peace/security narrative to one which highlights the struggle for human rights in a situation in which those rights are deprived.

Based on his public rhetoric among Palestinians, Mahmoud Abbas is not interested in pushing this narrative. As I reported last week, the PA president recently ridiculed popular unarmed resistance movements such as those in Bil’in and Nabi Saleh as nothing more than a ‘festival.’ His argument was that the unarmed resistance is helpful but it is ultimately within the political arena, the arena where the PA and PLO reign supreme, that real change can take place. He might be logically correct but the track record of his Palestinian Authority in negotiating with an Israeli government that harbours little regard for international law has not bode well for the rights of Palestinians living under Israeli occupation

To add insult to injury, Abbas directly attacked one of the core components of contemporary Palestinian unarmed resistance, the global campaign to boycott Israel, in his recent statehood address. He stated in clear language that the PA, under his leadership, is not out to ‘delegitimize Israel,’rather it was working to ‘delegitimize’ Israel’s occupation. Leaders of the popular non-violent movements in the West Bank would likely take issue with such a stance for the simple reason that they operate under the assumption that one can’t separate Israel from its occupation, or the incredible inequality alive within the official Israeli position vis-a-vis Palestinian citizens of the Jewish state. Thus, any attempt to ‘delegitmize’ Israel’s occupation ultimately targets the legitimacy of Israel as a whole.

The Palestinian Authority is the middle of a crisis. It’s statehood attempt is understood by a growing number of Palestinians as a last ditch effort to shore up what little legitimacy the PA still has (remember the Palestine Papers, they still play heavily in people’s minds in Ramallah and Bethlehem). Abbas’s speech, which clearly pandered to an international community worried about the Palestinian leadership’s latest efforts, will likely hurt the PA’s image inside the areas that it (barely) controls. But the speech did make a lot of American Jews and Israelis feel better about the statehood bid.