What disturbs the Right is not the occupation, but those who attempt to expose the violence that maintaining military rule over a civilian population requires. 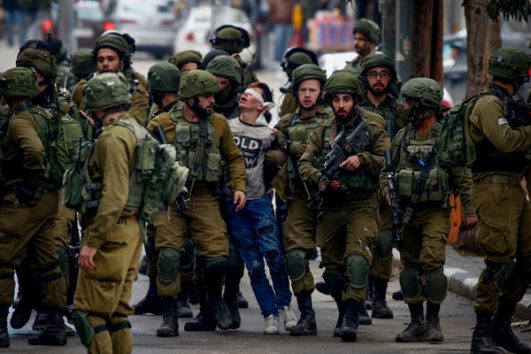 “Thousands of videos won’t change the fact – Breaking the Silence is an organization that slanders IDF soldiers around the world and is based on the distortion of facts and lies.”

Justice Minister Ayelet Shaked made this Kafkaeqsue remark after video documentation contradicted the prosecutor’s version of events in the show trial of Breaking the Silence spokesperson Dean Issacharoff. This material, which revealed that the government had interrogated the wrong Palestinian in an intentional attempt to portray Issacharoff as a liar, led to the opening of a new case. But according to Shaked, new evidence won’t change her conclusion.

Since Shaked’s comments, at least five videoed accounts of even more severe IDF violence against Palestinians in the West Bank have surfaced. In one of the videos, a soldier from the Givati Brigade forcefully hits a Palestinian boy in the head, knocking him to the ground. In another, an Israeli Border Police officer throws a stun grenade at a Palestinian couple holding a baby. In the most disturbing video, IDF soldiers beat an already wounded Palestinian man, Yassin Saradih, and deny him medical treatment for a gunshot wound. Saradih died in IDF custody.

In all of the videos, these are ordinary combat soldiers. Indeed, their actions are so ordinary in the reality of the occupation that the day after Saradih died in IDF hands, the unit’s commander commended his soldiers for “neutralizing the terrorist.”

During Issacharoff’s case, the Defense Minister Avigdor Liberman and Education Minister Naftali Bennett joined Shaked in calling the incident about which Issacharoff testified — beating a Palestinian detainee — a “war crime.” Yet neither Justice Minister Shaked nor anyone else on the Right has said anything about opening investigations against the soldiers who appear in the aforementioned videos.

Their silence proves Issacharoff’s central claim: the use of violence is an inextricable part of the routine of the occupation and of what soldiers are required to do. Each instance of violence that has come to light since the Isscharoff case has torn off a small piece of the hasbara (Israeli state-sponsored PR) mask — the denial of the occupation — that politicians try to maintain. The prosecution in the Issacharoff case went beyond its jurisdiction by declaring that Dean’s testimony was “a false claim” and that “the events did not occur at all,” as if the occupation were the invention of Palestinians and leftists.

In a desperate attempt to obscure the violence of the occupation, the head of the Coordinator of Government Activities in the Territories (COGAT), the Israeli army unit that governs the occupied territories, announced that Mohammed Tamimi (who suffered a fractured skull when soldiers shot him in the head with a rubber-coated bullet) had not actually been shot, but had injured his head falling off of a bike.

Dozens of eye-witnesses, a CT scan, and a shell-casing removed from Mohammed’s skull were not enough to prevent the IDF from portraying the army and Israeli society as the victims of a Palestinian propaganda campaign. The missing part of Mohammed’s skull was, according to the army, the result of “the Palestinian culture of lies and incitement,” for after the boy “lied” about being shot in the head, the Palestinians were forced to operate on him, which is how part of his skull came to be missing. To prove this, our brave soldiers raided the village of Nabi Saleh, where Mohammed Tamimi lives, in the middle of the night to arrest the injured boy in his bed and bring him in for interrogation, where he allegedly confessed to have fallen off his bike.

The Right has met all of this with silence. Almost no one has asked: if in a case as obvious and terrible as Mohammed Tamimi’s, the IDF forced a confession, how many other false confessions are there? How many people are currently imprisoned for months and years on the basis of similarly forced confessions?

During my time as a soldier in COGAT in the Nablus area, I remember a young officer, a translator in the military courts, bragging about slacking on the job and not translating the forms that Palestinians needed to sign. Similarly, during the show investigation against Dean Issacharoff, the prosecutor questioned a Palestinian man — in Hebrew —who was not even present at the incident about which Dean testified. It was later revealed that the investigator had told the Palestinian man that he was being investigated because of some “lying soldiers,” and that the Palestinian man who was questioned had been beaten, but by a Border Police officer and not Issacharoff. By then, however, the system was no longer interested in the results of the investigation.

The occupation no longer requires the court system to justify its existence. The branches of government, which carry out and defend the occupation, now have a new task: the conquest of truth. The occupation has stripped Palestinians of the power to determine their own lives to such an extent that when Israeli soldiers shoot Palestinians in the head, monopoly over the truth remains in our hands — the hands of the occupiers.

Will the demagogues of the Right now admit that it is not the violence of the occupation that disturbs them, but those who expose that violence?

Frima (Merphie) Bubis, 23, was raised in the religious-Zionist community, and today is the Jewish Diaspora coordinator for Breaking the Silence. A version of this article first appeared in Hebrew at Local Call. Read it here.