The last week has been action packed for Israeli animal rights activists, offering further proof of the movement’s growing influence over Israeli society. 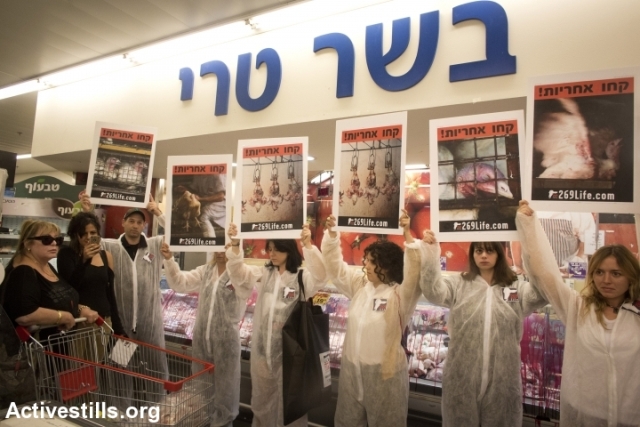 It started last Friday, when members of an animal rights group stood silently in the center of Tel Aviv. Each member held a dead chicken in his or her hands, wearing t-shirts that read “Their lives are in your hands.” On Tuesday, about 20 activists from several different groups showed up at the Soglowek slaughter house in Shlomi (a small development town near the Lebanese border), chained themselves to the gates of the factory and the approaching bird-carrying trucks. Three were arrested.

On Thursday, another animal rights group held a protest inside a major supermarket in Tel Aviv. The activists poured fake blood all over the poultry section and called upon shoppers to take responsibility for what they buy and eat. One was arrested and held over night in detention before being released the next day. Another quiet vigil took place in the city of Ramle on Friday, where three activists were detained for handing out leaflets which included information on animal rights. 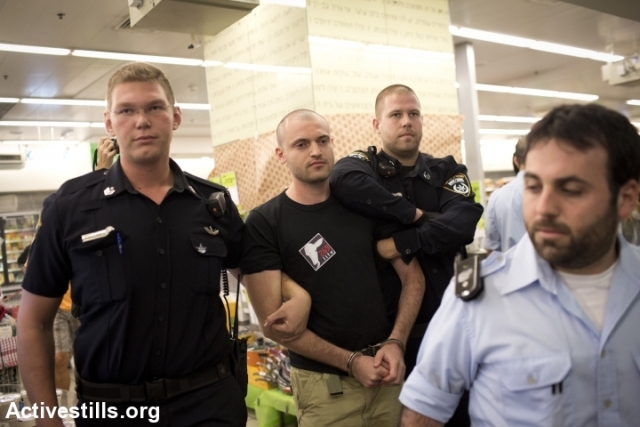 Arrests of an activist in the supermarket (Oren Ziv / Activestills)

The actions come in the wake of an investigative story aired on the primetime Channel 2 show Kolbotek. The story included a film recorded by activists, which showed the brutal conditions under which chickens are held and slaughtered in the Soglowek Shlomi factory. The show also recently aired a similar story about Tnuva’s cattle slaughter house. 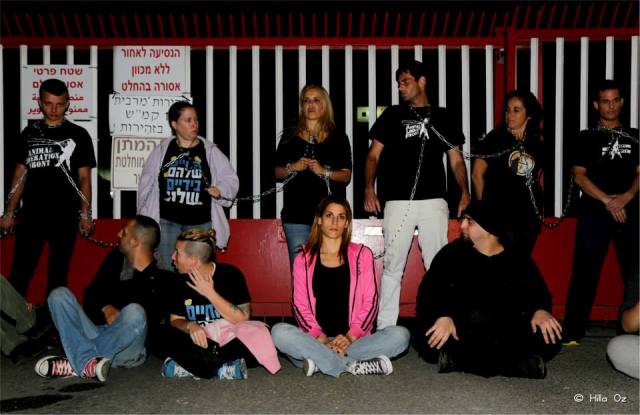 The increase is activism coincides with notable rise of veganism and animal rights discourse in Israel. Up until two years ago the movement was extremely small, and although dedicated activists were putting in a lot of hard work and pushing through positive laws in Knesset (like the ban on Foie Gras), the general public and political discourse was oblivious to the issue. The last few years, however, have seen a rise in the movement, especially since American activist and vegan guru Gary Yourofsky visited the country in September 2012. Yourofsky’s famous Hebrew-subtitled YouTube lecture has nearly 700,000 views, and more and more public figures – including prominent journalists, academics, politicians and athletes – have been calling on people to watch the lecture and go vegan, or at least adopt a model of “Meatless Monday.”

Furthermore, new vegan restaurants have opened in Tel Aviv and elsewhere, and a new NGO called “Vegan Friendly” has begun awarding restaurants with special label if they have sufficiently varied vegan options on their menus (and all this in a country that has always been vegetarian friendly by nature). At the same time, a new activist group by the name of 269 was created, characterized by its members’ symbolic choice to tattoo or burn the number onto their skin as a mark of solidarity with calfs who are branded before slaughter. As Haaretz reported, the group became the heart of an international movement of the same name. 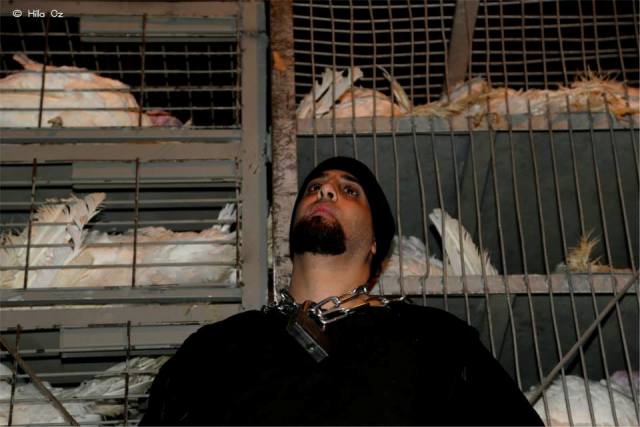 And so Israel, or at least a significant part of the Israeli elite, has become a center for animal rights discourse. With animal rights activism on the rise, Yourofsky is about to make another highly-anticipated tour throughout the country. But the current push toward animal rights does not go without criticism, even from the left wing, human rights activists of the movement. I explore these criticisms in a separate post.