The latest right-wing sting operation against Israeli human rights groups made it to primetime this week. Israeli journalists, once again, played a central role in shaming those who criticize the occupation. 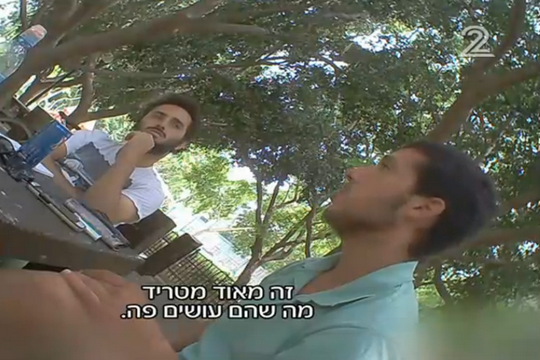 A Channel 2 report that aired Thursday night accused Israeli human rights organization Breaking the Silence of gathering confidential information on Israeli military operations through its interviews with former soldiers. The report was based on hidden camera footage recorded by right-wing group “Ad Kan,” which infiltrates and gathers information in order to shame anti-occupation organizations. The footage shows Breaking the Silence activists collecting testimonies from several former soldiers, which include questions on Gaza tunnels as well as military equipment and positions.

By Friday morning, Defense Minister Moshe Ya’alon had already ordered an investigation into the activities of the organization, accusing it of attempting to collect state secrets. Others went as for as talking about espionage. The following is a translation of a Hebrew piece I wrote.

Ronen Bergman, Yedioth Ahronoth‘s excellent defense correspondent, often describes the immense powers of Israeli secrecy as follows: imagine that you write down the following sentence on a piece of paper: “The State of Israel has X atomic bombs,” and then place that piece of paper into your pocket. From this moment on, you are guilty of “possessing state secrets,” and can be sentenced to prison.

All journalists are exposed to classified material. Since all army information is classified, every article on security-related matters begins with gathering classified materials — even those PR items organized by the IDF Spokesperson. In other countries, professional ethics guide journalists when they decide what to publish. The idea is that the responsibility for keeping secret rests with the authorities, and whatever they cannot or wouldn’t keep secret could be published. In Israel, the situation is the exact opposite: nothing related to state security can be published without prior approval from the IDF Censor. This is a drastic, unprecedented restriction on the ability to have a serious conversation on Israeli politics and history. Much of the public is completely ignorant when it comes to critical actions and policies.

Over the years, some of Israel’s leading journalists tried to challenge the Censor. They turned to the courts in order to gain approval to publish material, and at times even risked prison time for publishing materials that were in the public’s interest. Hadashot, a defunct Israeli daily newspaper, was shut down for three days for publishing photos of one of the Bus 300 hijackers, still alive (he was later killed by his capturers from the Shin Bet). Bergman himself was interrogated over another affair concerning Israel’s nuclear program. Journalists challenged the censor because publishing facts is in the public’s interest. Reporting is the central mission of journalist; censorship is the domain of the regime, and reporters should avoid and fight it. What applies to journalists also applies to human rights organizations, bloggers, researchers — in fact to every citizen. Indeed, Israeli law does not differentiate between all these, and journalists have no special rights when it comes to handling state secrets.

And then came Channel 2’s investigation into Breaking the Silence. According to its logic, not only must every piece of information related to the army be sent to the IDF Censor (which Breaking the Silence does, as opposed to nearly all other human rights organizations in the world), but we shouldn’t even interview past and present members of the security establishment on various matters, since we might be exposed to state secrets. Even if those are never published. Even if they are folded and put in a pocket.

On Friday morning, Ofer Hadad, the journalist behind the Breaking the Silence story, proudly tweeted that Defense Minister Moshe Ya’alon had “ordered to open an investigation to look into the information extracted from discharged soldiers.” I tried to understand from Hadad why this was a cause for celebration. If the defense minister finishes his investigation into Breaking the Silence and starts looking into Channel 2 News (where he works), won’t he and his colleagues be just as guilty? If the people behind Ad Kan would have come to Hadad and offered him a scoop on the IDF, would he not have tried to interview them? Would he not then build up the best possible story, before letting the IDF Censor decide what he can or cannot published? And maybe, I would like to believe, that in some cases he would even argue with the Censor? Or perhaps Ofer Hadad thinks there is one law for journalists and another for human rights organizations? Or one law for Channel 2 and another for Breaking the Silence? If so, we are talking about a notion that lacks any basis in Israeli law.

An even more disturbing thought is that Hadad would not have asked those sources anything at all. Maybe where he works journalists who criticize the army are frowned upon. Maybe they rather criticize those who criticize the army. Maybe Hadad thinks that after he finishes with Breaking the Silence, the defense minister really must start investigating his very own place of work. And maybe we are witnessing the rise of a new kind of investigative journalists: we can call it “journalists in support of censorship.”

But those who believe that sunlight is the best disinfectant must also believe that the role of the media and organizations is to expose, check, ask, and become curious — about everything. Only then do we start taking into consideration ethics, censorship, and our own judgement in order to decide what should or shouldn’t be published. Exactly like Breaking the Silence did.

Ad Kan’s latest investigation didn’t “expose” a thing aside from the moral corruption of the Israeli media, which is busy ingratiating itself with the public, the government, and the army. Criticism of the occupation becomes taboo, while criticizing the critics becomes the norm. Like the army, the courts, and the police, the media — another venerated Israeli establishment — has cowered in the face of the occupation.