Israeli Solidarity activist Daniel Dukarevitch-Argo, who first got to know Sheikh Jarrah almost a decade ago, tells the story of the protest movement  from the ground up. 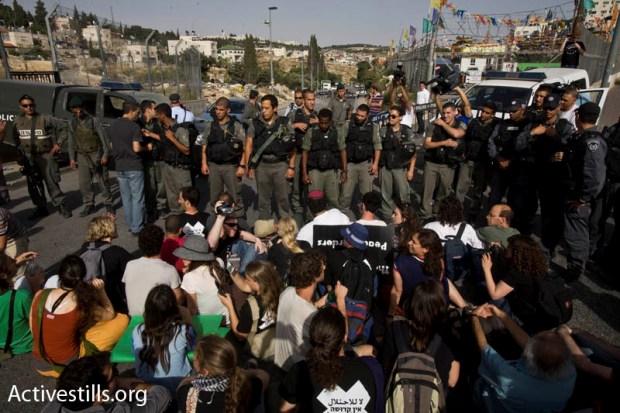 A new film by Just Vision about the struggle in Sheikh Jarrah will soon be released around the world. Simultaneously, opinion articles and summation pieces have begun to appear, adding to a months’ long debate about the Solidarity movement’s decision to stop the weekly demonstrations in the East Jerusalem neighborhood last September.

Before one specific myth becomes cemented in general public opinion, I promised myself to try to describe what events looked like then and now from the point of view of an activist. This is merely an attempt, because at the end of the day those who make history on the ground are rarely the ones who write it, Israelis and Palestinians alike.

I do not remember when the very first time was that I slept in the house of a Palestinian family in Sheikh Jarrah. It was sometime back in 2003, along with about 20 other Israeli activists. In those days, or rather nights, I wandered between various houses in east Jerusalem. The routine was known, tediously familiar, so much so that the dates and locations have become blurred over time. House after house, family after family, only the activists remained the same. You arrive, make a stronghold in the house, sleep there for a few nights, until the police and the settlers take advantage of a moment of lack of alertness – break into the house, arrest some, beat others, and within hours the house is another settlement. And we would continue on to the next house.

Outside this minuscule circle of people, no one in the Israeli public knew what was going on. The media did not report it back then, no one demonstrated, and the few friends I had left just thought I was behaving strangely. Not that any of that made us stop; we strongly felt that we were doing the right thing.

But there was a limit even to our naivety. One day the feeling of helplessness and defeat was simply too overwhelming. We saw Jerusalem increasingly pockmarked by settlements, we saw the right wing creating one fact on the ground after another, and we saw our Palestinian partners becoming despaired by their inability to withstand the situation and by our inability to help them.

In November 2009 a small group of activists gathered in Jerusalem. Fourteen people, most of them “veterans” of those nights and evacuations, sat in a room and tried to think where we went wrong and how we could start over. The idea decided on that night was to initiate marches from the center of Jerusalem to various neighborhoods on its east side. Sheikh Jarrah was chosen as the destination of the first march.

The rest has become a widely known history. The marches quickly grew from several people to several thousands, the police made hundreds of arrests, and Sheikh Jarrah became a symbol, in Israel and around the world, for the struggle against settlements. Even a film has been made.
During the summer of 2011, we stopped to think for a minute, to regroup and assess all that had transpired. Per the settlers’ plans, by the end of 2011 a settlement of 200 housing units was supposed to be in place, in the middle of an entirely Jewish neighborhood. In reality, for the first time in years, not a single Palestinian family was evicted since the demonstrations had started. The settlement was largely thwarted. For the first time in years, we beat the right-wing agenda.

Simultaneously, the police withdrew from the neighborhood, allowed the demonstrations to take place and stopped routinely arresting Palestinian residents. The residents, on their part, started keeping away from the demonstrations and elected a new popular committee that chose to focus on the legal battle and not on the one in the streets.

The reality had changed. Yes, also thanks to us.

But none of this took place in a vacuum. While we were demonstrating in Sheikh Jarrah, more settlements were being built elsewhere in East Jerusalem. Residents from around the city, along with popular committees of other neighborhoods, sought out our cooperation.
From the very beginning, the Solidarity movement insisted upon 3 fundamental principles: to act where injustice takes place, to base itself on a joint Israeli-Palestinian effort and to aspire to achieve viable accomplishments on the ground. Once the reality in Sheikh Jarrah had changed, we found ourselves facing a situation in which nothing was happening in the neighborhood itself any longer. Furthermore, we could not ignore the residents’ own wishes to change the nature of the actions being taken. One major problem still remained – the families that had already been evicted before the demonstrations started had not yet returned to their homes.

Only it was clear to all of us, Israelis and Palestinians alike, that the battle for the fate of these families would not be determined in Sheikh Jarrah. In order to not only stop the wheel of history but turn it backwards and return the houses to the evicted families, a much more extensive change would have to take place. Their only chance, as well as ours, would be an end to the occupation as a whole and a formal division of Jerusalem. To that end, weekly demonstrations in Sheikh Jarrah would not suffice.

Last September we were faced with the need to make a very difficult decision: should we continue with the routine of demonstrations which were becoming smaller, while knowing they have become ineffective and that we would shortly return to the starting point of 20 activists who are entirely in the right but nevertheless isolated? Or should we take it upon ourselves in full power to continue to build a movement which could take part in ending the occupation and reinstating the rightful home owners in Sheikh Jarrah, but not only there?

After long deliberations and in full agreement with the residents and activists in Sheikh Jarrah and in other neighborhoods in East Jerusalem, we opted for the latter. This, while realizing that should the reality in Sheikh Jarrah change again, we would be the first to demonstrate there once more.
Over that last few months we have achieved a string of accomplishments in Silwan, in Issawiya and A-Tur, and have strengthened our bonds and cooperation with the popular committees in these neighborhoods. We have continued our activities in cities inside Israel such as Ramle and Jaffa. We have created activist groups of students, teachers, Russian speakers and more. We have started utilizing more and more instruments besides weekly demonstrations (while those still take place in Issawiya and A-Tur).

But we have not yet learned to tell the full story. In a way, the Solidarity movement has become the victim of the myth it helped create in making people believe that all the problems of the world would be solved if only enough people came to demonstrate in Sheikh Jarrah on Friday. Just like it took us time to realize the impact of this myth ourselves, it will take time to persuade the thousands who demonstrated with us on Fridays at the playground in Sheikh Jarrah.

The struggle, which was ignited in November 2009, is not yet over. Just like each weekly demonstration grew because the previous one had managed to survive against all odds, so the current stage of the struggle in East Jerusalem can take place only because of the success in Sheikh Jarrah. And only success can allow us to continue to work together in the future, for the wellbeing of Israelis and Palestinians. So that those who became refugees can return to their homes, in Sheikh Jarrah and in all of Palestine.

Daniel Dukarevitch-Argo is a Russian-born Israeli doctor and “Solidarity” activist.