The only way to enjoy living in this slender, tiny corral of a country is to be a border enthusiast, which is what I’m planning to become for the next three weeks. 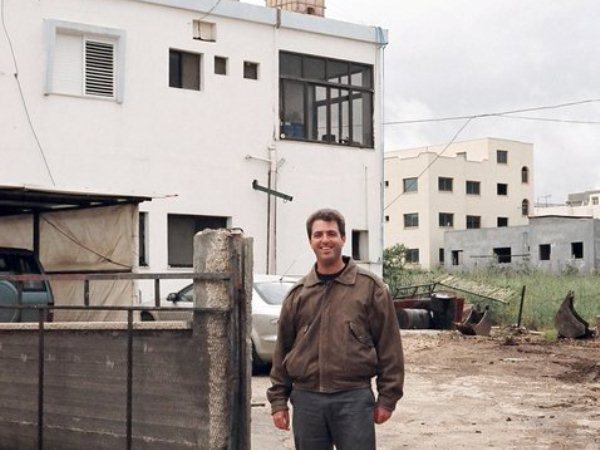 The photo above was taken early in 2006 on Lebanese soil. Israelis are not allowed to visit Lebanon, and yet this is me, wearing my grandfather’s old leather jacket. I did not serve as a soldier in Lebanon, I do not possess a foreign passport, and I did not climb the border fence.  I made it into Lebanon because our borders make no sense.

The village of Ghajar is located in close proximity to the Lebanese border, and during the Israeli occupation of southern Lebanon in the 1980s and 90s, the village expanded into the northern neighbor. After withdrawing its forces from southern Lebanon, Israel chose to construct its border fence entirely south of the village, isolating the (Allawi Arab) Israeli citizens who call it home in Hezbollah-controlled territory.

I came to Ghajar as translator for a German journalist. We had to drive across 16 concrete blocks to reach the soldiers guarding the village’s gate. Having been admitted, we found ourselves free to wander between the Israeli and Lebanese parts of the village, which are separated by only its main street. We clearly saw the Hezbollah positions surrounding it, and the uninterrupted but unused paths leading north towards Beirut. All of this was surreal, but then, anyone who followed my previous two journeys knows that surreal is the default around these parts.

While the border with Lebanon is an internationally recognized border, many of Israel’s border’s aren’t. In a sense, the country has no proper borders. That does not mean that we can all just step out into the world without worrying about where we left our passports, and it would be a particularly sorry mistake to try and do that via Ghajar. On the contrary: apparently boundless Israel is surrounded by such abundance of barbed wire that it can be likened to a large prison. Or rather – a system of large prisons.

My country once had internationally accepted borders, but that ended with the Six Day War of 1967. On that week in June we took bites from our neighbors’ territories: we bit the Golan Heights off from Syria, the West Bank from Jordan, the Gaza Strip and the Sinai Peninsula from Egypt. Since then, the Golan and East Jerusalem were annexed to Israel, the Sinai was returned to Egypt, the West Bank is still being heavily settled by Israelis and the Gaza Strip settled and then vacated of its settlers. The degree to which we treat the various lines as proper borders varies from Israeli to Israeli. All and all we can’t say we know where our borders run, or what the hell is going on.

What we do know is that if we see a line on the map, it is likely lined with some kind of a heavy duty fence, probably electric.  So we put fences around much of the old border, even in places where we today control both its sides. We put fences along borders that were never borders, in areas that we shouldn’t necessarily control. The fencing is still going on as I write this, both along the Egyptian border and around the village of Walajeh, near Jerusalem, which is to be entirely engulfed by a fence. The result is a proper web of walls and fences. The thorny labyrinth we call home.

The only way to enjoy living in this slender, tiny, corral of a country, is to be a border enthusiast, which is what I’m planning to become for the next three weeks. “The Round Trip,” the third in my three-part travel-writing portrait of Israel/Palestine, will be a journey along the borders as they were charted in 1949.

All of this will wait for tomorrow, however. Right now I must dress up for the Passover seder, my favorite religious event of the year, to be held at my parent’s home. It’s a great celebration of breaking through borders, walking on the seafloor and on a river’s bed, journeying to a promised land that must have been more clearly defined at the time than it is now. Happy festival of liberty to all of you (as well as a good Good Friday), and may your pants never tear on barbed wire.

Thanks for reading and taking part in the adventure. All writing on this site is done voluntarily, so if any of you would like to pitch in directly for my travel expenses, please click here or on the “donate” button at the top of this page to do so. I’m deeply grateful to those who already donated. Thank you so much! This project would be impossible if not for you.

For more of The Round Trip