facebook twitter email link
Staying on the move in Israel and the Palestinian Territories through a month of trial. First excursion: Beit Shean and Tel Al-Baida. First experience: Uncertainty.
. 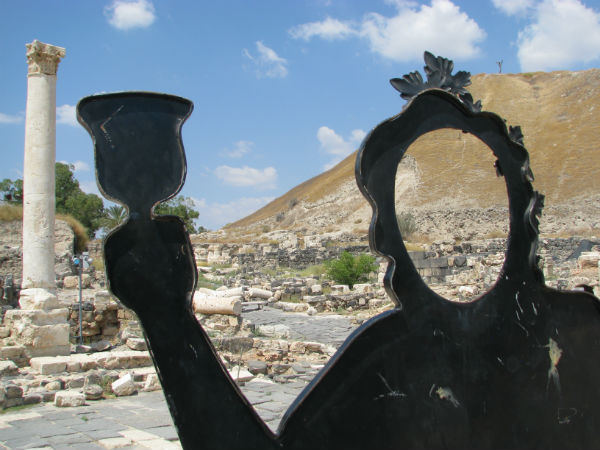 .
Tel Aviv has become such a carnival of protest this summer, that leaving it can be a bit of an emotional zig-zag. On the sherut, or minivan bus, to the city of Afula, I experience my first downwards zig, on learning that the rest of the country may not be quite as much of a rebellious paradise.
.
Twenty-two year-old Palestinian-Israeli Amjad sits next to me. By the time we reach his town of Umm al Fahm, I learn that despite working 12-13 hour shifts at a Tel Aviv restaurant and nonetheless remaining in debt, he has so far not been involved in the J14 movement at all and hasn’t even heard of the great march planned for Saturday night.
.
Afula itself, a Jewish Israeli town best known for being a backwater, provides a zag: Young guys and girls hand out leaflets for a local Saturday night ordeal, along the platforms of the town’s bus terminal. I help an English tourist named Liz find her way to the bus heading to Beit Shean, not before exposing her to Afula’s famous wonder – the jumping falafel, which the vendor tosses in the air, then catches using a pita pocket as a baseball glove. 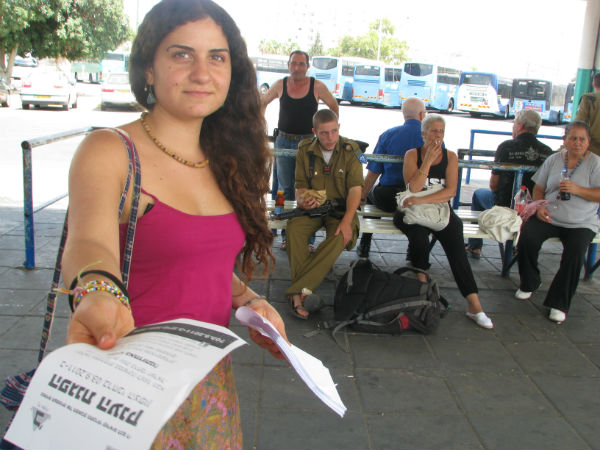 Shelly, an activist from Afula, hands out leaflets for Saturday's protest
Liz is an English teacher living in Amman,  and is headed for the Jordanian border. From what she saw, Jordanians don’t seem to know anything about the J14 struggle, which isn’t really a surprise. Nor, so she says, do they talk much about the trying September 20 deadline facing their brethren. Zig.
.
The zag comes on the bus.  “We need a revolution,” the driver says to a front row passenger. “There’s no other choice. I remember in France, when I was young there was Danny the Red. A leader!”
.
We are traveling through the summer-scorched valley of Jezre’el, better known as the valley of Armageddon, after the ancient town of Megido at its southern end. What a great place to kick off a journey on a month that holds an apocalyptic promise.
.
I picked the city of Beit Shean, at the valley’s opening to the great rift, as my trip’s proper first station. A famous Hebrew country song recommends it as a good destination for those seeking fresh air, so why not? It is the first day of school and the last day of Eid Al-Fitr. So no special public events are held anywhere in the country. Might as well go to anyway sleepy Beit Shean and enjoy the silence.
.
Beit Shean is not all fresh air, however. In the year 409 AD, this city, already thousands of years old, was declared capital of “Paelestina Seconda”, a decent chunk of the then-young Byzantine Empire. Today I find myself one of only three tourists visiting the imposing ruins. The other two are a Middle Aged couple from Shefar’am, in the region of Haifa: Mr. and Mrs. Hassoun. I ask them what they think of the ruins.
.
“Nothing is new under the sun,” says Mr. Hassoun. “if they had the technology to make such things thousands of years ago, this may mean that we are not so unique.”
.
“Yes,” I say, “But empires rise and empires fall. These columns ended up crashing down in an earthquake. What do you think will come of our columns? Our own emperor seems to be in an unstable position at the moment.”
.
Hassoun isn’t moved by the attempted social justice earthquake: “As long as we have leaders made of rubber, nothing will happen. Netanyahu is no marble column, and that’s his major asset. He will bend nicely until the storm calms down, then spring back up. You see?” I do. Zig. Decorations at the Beit Shean archeological park suggest that this place was once affluent
Beit Shean owes me a zag. So I head for its tent city. Over 90 tent cities have sprung on Israel’s map over the summer, all of them monuments to the public’s unrest over living costs and the uncontrolled privatization of the country’s assets. If the movement’s spirit is alive anywhere, it should be here in Beit Shean. Some local tent dwellers, so I’ve heard, have been evicted from public housing and have nowhere else to go. These people have a real bill to settle with Netanyahu’s government. They will offer more than a mere shrug.
.
Perhaps they did have somewhere to go, because the tent city is abandoned. Only a few sheets, a rug, the skin of a disused tent and a sign inscribed “fighting for our home!” remain. Tent Beit Shean is much more of a ruin then ancient Beit Shean. 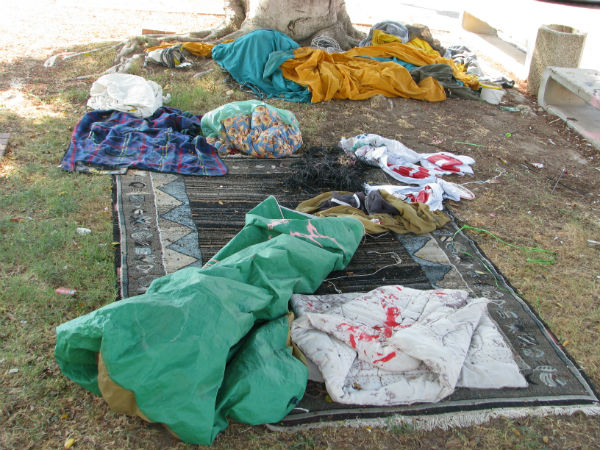 Beit Shean's tent ghost town
In true shock, I turn to locals, seeking an explanation. Nobody knows a thing. “Maybe they were hot,” suggests the shopkeeper at a nearby bookshop. “Not a clue,” tells me a guy on a scooter, “But you should really check out the tent city in Ariel, that shit is huge.”
.
“Ariel? But that’s a settlement. I thought they didn’t have any housing problems.”
.
“They don’t, but they empathize,” he says and rolls away.
.
So be it, I turn my stern towards the West Bank, only 5 miles to the south, catching a lift there with two middle class Jewish girls from suburban Tel-= Aviv who have an errand to run at one of the settlements. They literally poke fun at the protests. I’m three zigs in.
.
Once past the checkpoint, I pass on the girls’ destination, bid them farewell at a dusty crossroads which offers a ravishing view to the mountains across the Jordan river and the Jordanian border,  pick a cluster of nearby villages and head for it, for the Palestinian portion of the day.
.
My first lift is with a kind settler lady who is terrified an my idea of venturing into the villages. She is convinced that I will be “evaporated” there. I promise to try and avoid such fate. The following lift is with two Palestinian farmers driving a load of live, cute, calves. We drive through a magical terrain of desert hills and tiny, palm tree-dotted oases with Bedouin encampments. I ended up getting my fix of tents after all. Northeastern West Bank landscape seen through inscription on pick up truck window
For an Israeli, this isn’t the middle of nowhere, these are the far reaches of nowhere. No one I know has even been on this breathtaking road or planned to, except, perhaps, during their military service.
.
Indeed, we reach a checkpoint. From here on the countryside is designated ״Area A” and Israelis are not allowed in by order of Israel’s military. I knew as much, but hoped the checkpoint would be vacant, as was the case with many of them in recent months. It wasn’t. The soldiers request that I leave the vehicle and catch a ride back. The sealed gate to Toubas
While waiting for a lift by the checkpoint, I watch a Palestinian microbus, identical to the sherut that took me in the morning, go through the inspection. All passengers are forced to leave the van and walk through a fenced “human filter” where all of their belongings are scrutinized. All are at last approved and rejoin the van across the checkpoint. The zigs and zags of the previous hours lose meaning at such a sight. I decide to put the undetermined Israeli public aside and, upon joining the van’s passengers, raise with the driver the question of September 20.
.
“Inshallah all will be well,” he says,  “But to be honest, I think there’s going to be trouble. There already is. This checkpoint isn’t typically like this. A few days ago they still just waved us through.”
.
The van goes to Tel Al-Beida, the West Bank’s north-easternmost village. I travel along, my head full of dour thoughts. An Israel I believed was unanimously chanting for change seems to be unsure. A territory I planned on crisscrossing with some liberty this month seems to be largely sealed off, which causes my neighbors to go through new discomforts and humiliations. To make things jollier, I lost my hat, bought earlier in Beit Shean, in the dairy farmer’s pick up truck.
.
The day needs to end with a touch of grace, a zag. And it does. At a grocery store among the peaceful farmhouses of Tel Al-Baida, I notice a young man wearing a shirt with a Hebrew inscription: “Bibi, there’s a country outside Tel Aviv.”
.
It’s not an artifact of the exact struggle for which I root so adamantly, but the “Forum of Development Towns”  which produced the shirt, did pitch a couple of tents in Tel Aviv this summer. “Development towns” are often decrepit blue collar communities. They were formed largely in arid parts of the country, where the government dumped Jewish immigrants from Arab countries when those arrived in great numbers during the 1950s. Modern Beit Shean is one such place.
.
“How come you have this?” I ask in my heavily accented Arabic.
.
“He’s Israeli just like you,” somebody laughs from the back of the room. “and you both shouldn’t legally be here.”
.
It turns out that I have crashed a truly unique party. Edmond, Meir and Barak are Jewish Israelis from Beit Shean. Mohamed, the shopkeeper, has been a friend of Edmond’s since the seventies. Current travel restrictions prevent Mohamed from visiting his friend. But since Tel Al-Baida isn’t secured by a checkpoint, Edmond can still come and bring others for a plastic cup of Coke. 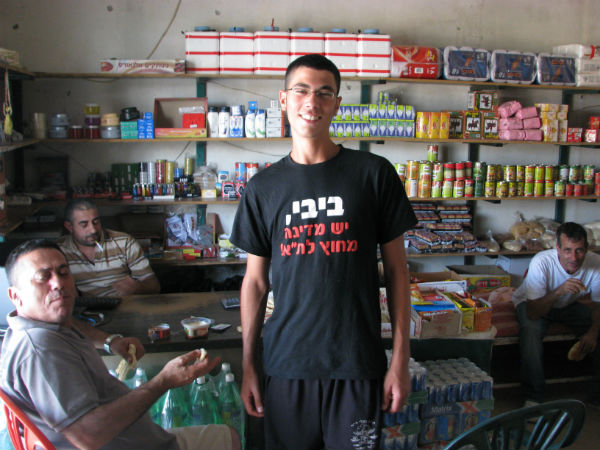 The friends at Tel Al-Baida
His son, Barak, is soon to join the IDF’s  Golani – an elite combat brigade. Before heading out for the road, I wish him a safe service, with little to contradict this rare scene of coexistence, more zags than zigs and a success in alerting the government to his town’s needs. What are the chances of all this? About as high as finding three mainstream Israelis enjoying an afternoon in a West Bank village.
.
For more of the September Journey, click here
.
Thanks for reading and taking part in the adventure. If any of you would like to pitch in for my travel and food, please do so using the “donate” button at the top of this page. Please be sure and specify that you are contributing to Yuval’s September Journey.