The daily terrorism directed against Palestinians in the West Bank is reliant on the despair Palestinians have for the Israeli justice system. A case in point: olive trees burned to the ground. 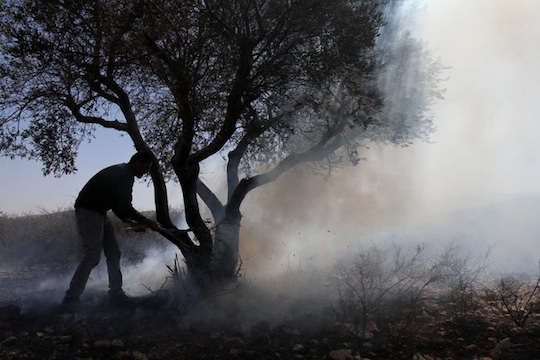 A Palestinian man extinguishes an olive tree that was set alight. Hundreds of olive trees were burned in the West Bank village of J’alud, October 9, 2013. (Photo: Yesh Din)

Hass noted that the attacks are quiet, because the Israeli media and the IDF are in cahoots to cover up what, at best, is military incompetence of the first rank and, at worst, is aiding and abetting agricultural terrorism. But there’s another reason that these events fade into the background. Aside from the Israeli public’s disinterest in knowing what is happening in their name and with their tax shekels; and aside from the tendency of for-profit organizations who once were proud of saying that the public needs to know but nowadays just prefer to avoid angering the buyers of the ads they envelope in text, there is another factor: the fact that Palestinians despair of reporting the incidents. Here is a case in point.

Abd Al-Razeq Mahmmoud Abd Al-Karim Amer is a farmer from Qaddum who is all too familiar with the dark side of the Israeli occupation. Every year his plot of land, situated near the settlement of Qedumim, is attacked on the eve of the olive harvest. He lodged several complaints with the Israeli police in the past, to no avail. In 2008, Amer saw the vandals who ran amok on his plot with his very own eyes; the police investigator told him that does not constitute evidence.

One night last September, Amer was asleep at home when his sons’ shouts awoke: from the house, they could see the fire and smoke arising from the plot of land. The sons and his neighbors called the fire brigade and tried to save what they could. The following morning they were able to assess the damage: 27 olive trees, estimated to be between 40 and 45 years old, were burned; 70 saplings, about three years old, were broken. Amer believes they were broken before the night of the fire.

But he cannot know for certain. He has no access to his plot of land, which is adjacent to the settlement of Qedumim, other than the two visits per year that he is required to coordinate with the army. The settlers, of course, have free access to it. Even if Amer were to encounter the settlers while they were destroying his saplings there would have been nothing he could do: the settlers are armed, after all, are backed by the strongest army in the Middle East. Were Amer to protect his property from them, in the best case scenario, he would find himself under arrest, and in the worst case scenario he could be yet another fatality of our forces’ fire, whose unfortunate death would only be investigated long after everyone has already forgotten about it.

It was not a coincidence that the fire broke out just before harvest time: that’s how our dear brothers make clear to Amer and his ilk that there is no point in continuing to fight over the plot: anonymous saboteurs will reach it, year after year. Wouldn’t it be better to give up the dwindling property and the heartache, and emigrate – as did, for instance, many of the villagers residing next to the outpost Adei Ad?

Amer has almost given up. He is unwilling to waste the time needed to file a complaint with the police. After all, its failure rate in investigating damage to crops is more than 97 percent. This isn’t a coincidence; this is the commander’s spirit we’re seeing. And Amer is not alone: time and again, we receive reports from Palestinians about incidents, saying they are unwilling to press charges because there is no point, but they want the incident to be published somehow. The chopping down of Amer’s trees won’t appear in the statistics of the police, and therefore it will mostly fade away. It is an actual event, but the self-enforced thought-police of the Israeli media will negate it.

Related:
Settler violence: Think of it like burning down a Jewish business
WATCH: Masked settler beats Palestinian with metal pipe