With war raging over Israel’s border with Syria, it’s easy to forget that the Golan Heights — a buffer between the two countries — is occupied territory. But occupied it is, and the landscape bears witness to a history of violence and expulsion. 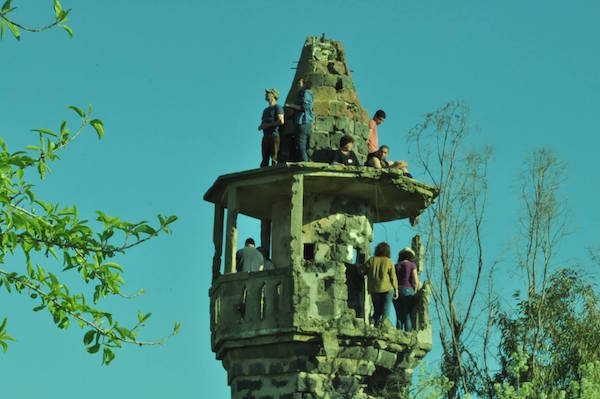 The minaret belonging to the ruined mosque of Sur’aman, a Circassian village that was destroyed following Israel’s occupation of the Syrian Golan in 1967, April 1, 2016. (Aiman Abu Jable/Jawlan.org)

“The sky fell to earth, the stars turned to stones…”
— Elias Khoury, Gate of the Sun

I’m standing at the top of a crumbling minaret, looking into Syria. The tower belongs to a mosque in the destroyed Circassian village of Sur’aman, whose ruins are gradually being consumed by the woods around them. In the distance lies a white UN observer post that sits on the 1974 ceasefire line between the occupied Golan Heights and Syria proper.

The view of Syria on the horizon is covered with a blue gauze; standing on the precipice of the minaret, I remember an essay by the American writer Rebecca Solnit in which she describes how light at the blue end of the spectrum doesn’t travel all the way to us from the sun. When we look out over the horizon, she explains, the blue tinge that we see is “the light that got lost…the color of there seen from here, the color of where you are not.” 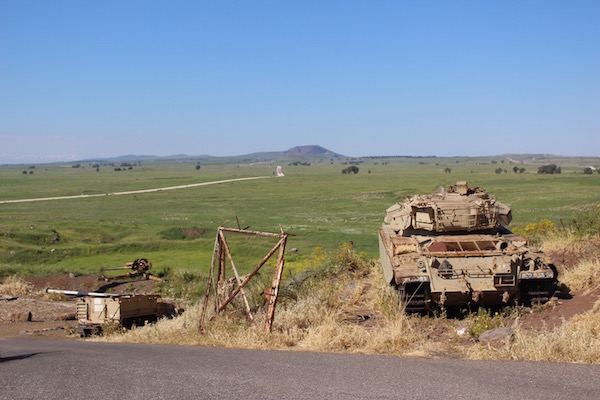 An abandoned tank lies on the side of the road by a former IDF military post at Tel Saki, Golan Heights, April 1, 2016. (Natasha Roth)

The Golan, too, is blue, for the 130,000 Syrians — Bedouin, Turkmen and Circassian — who were expelled following Israel’s capture of the area during the Six-Day War in 1967, and who cannot return to their homes. Many were pushed further into Syria, although not all of the refugees stayed there.

One of those Syrian-Circassian refugees is the reason I am standing at the top of the minaret. Farouk Merza, the father of a friend, Eléonore, was born in the village of Mansura in the northern Golan, and eventually settled in France after being expelled from his home in 1967. We are in Mansura to visit the site where Farouk’s house once stood, as well as other village landmarks that now exist only in memory. 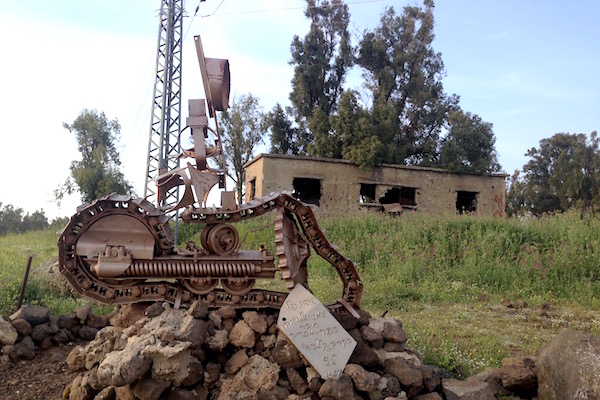 An Israeli war memorial on the side of the road, in front of a bullet-riddled abandoned building, Golan Heights, April 15, 2016. (Natasha Roth)

Not all were expelled. Between 6,000-7,000 Syrians were left behind in the Golan after the occupation began, refusing Israeli citizenship and instead taking permanent residency status, even after Israel annexed the territory in 1981. A few have started to seek citizenship in recent years in the wake of Syria’s five-year civil war, but the majority hold fast to the dream of one day being part of their homeland again. However, only on Sunday, Israeli Prime Minister Benjamin Netanyahu declared that Israel would never relinquish the Golan Heights, although the international community maintains that Israel’s rule over the area is illegitimate.

The Druze who stayed behind, along with their descendants, live in a few towns across the northern Golan. These localities preserve a sense of normality among the area’s heavy atmosphere, and when you go into places such as Majdal Shams and Masade the shadows of the past recede, somewhat. But then you hit the road and the ghosts draw back in again, and the air becomes dislocated once more. 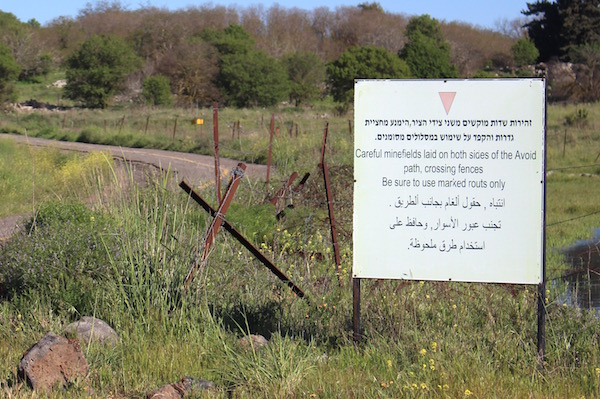 A sign warns of minefields on either side of the road leading to the destroyed Circassian village of Sur’aman, Golan Heights, April 1, 2016. (Natasha Roth)

Driving through the Golan feels much like trespassing on someone else’s subconscious. The landscape is fevered, hallucinogenic: abandoned tanks, Jeeps and armored personnel carriers litter the terrain and the roads wind through corridors of minefields and past innumerable Israeli memorials to the soldiers killed in the 1973 Yom Kippur War.

If you venture off the beaten track, animal skulls and other assorted bones appear at random, as do marshes and rolls of barbed wire. Syria is always looming in the distance. And everywhere, in all directions, sprawl ruined villages — great constellations of broken-up stone and concrete, and twisted steel rods. The past prowls on the side of the road here, and is inescapable: all around is the residue of violence, of what was and no longer is. 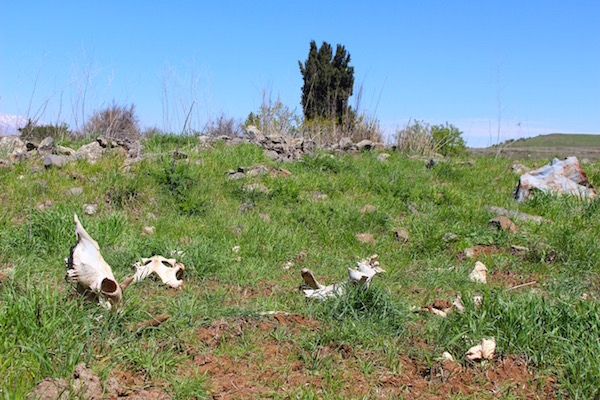 Animal bones litter the fields at the site of the destroyed Syrian village of Mansura, Golan Heights, April 2, 2016. (Natasha Roth)

Israel did not destroy the villages abandoned in 1967 immediately: that came later, towards the end of 1969. The Yom Kippur War visited yet more destruction on the landscape, and the solitary buildings that remain standing here and there are pockmarked with shell and bullet holes. In what was once Quneitra’s hospital, trees grow inside rooms, ceilings have been blown open, a winding staircase looks as if it has been frozen mid-collapse and galleries of lidless, frayed doorways stare out into the corridors. The silence is suffocating, even as the walls seem to scream about what went on here. 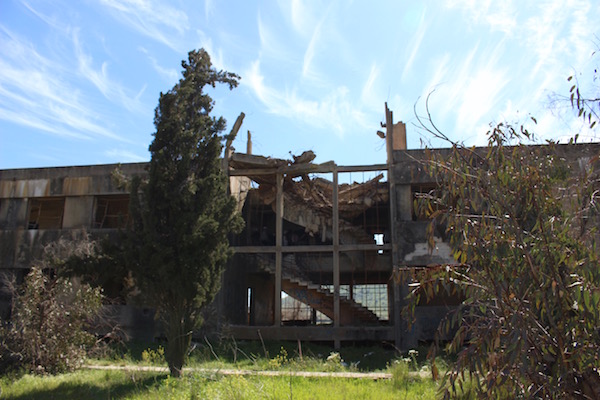 The remains of the staircase in the abandoned ruins of what was once Quneitra’s hospital, Golan Heights, April 2, 2016. (Natasha Roth)

But for now, back in Mansura, a small act of rebuilding is taking place. We mark the perimeter of where Farouk Merza’s house once stood, using the rocks strewn about around us. It is a symbolic re-laying of foundations that were wiped away half a century ago.

As we are working, we listen to a recording of Farouk being interviewed by his son-in-law Eitan, with his daughter Eléonore translating from French to English. Afterwards, as we are walking away from the site, Eléonore tells me how much hearing his voice in that empty yet teeming patch of land emphasized that he cannot physically go back to his birthplace. Crossing through the fields we pass by endless trails of ruins, some haphazard, some orderly, like stars that turned to stones.

The author was in the Golan Heights as part of a trip organized by De-Colonizer, on whose board she currently serves.