The director of a hospital destroyed during ‘Protective Edge’ has managed to rebuild part of the facility. Now he has about a month’s worth of fuel left to keep its back-up generators running. Without them, the hospital faces another complete shutdown. 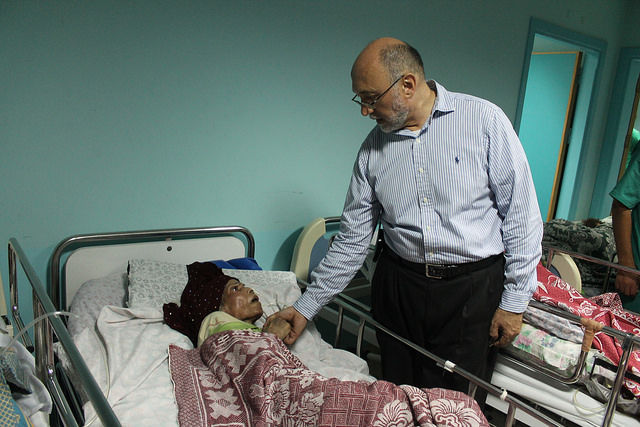 Dr. Basman Alashi, who directs El Wafa Medical Rehabilitation Hospital, comforts a patient during Israel’s Operation Protective Edge. The facility, which had been targeted by repeated firing from nearby Israeli positions, was completely destroyed on July 23, 2014. (Joe Catron)

At the height of Israel’s Operation Protective Edge, El Wafa Medical Rehabilitation Hospital was the target of fierce attacks from Israeli positions along Gaza’s eastern border, just over a kilometer away. Speaking to +972 at the time, the hospital’s director, Dr. Basman Alashi, described panic among his patients but insisted that he and his staff would continue to care for them — even if it meant paying the ultimate price.

“I am not going to leave my patients,” he said. “We either stay together, or we leave this world together.”

That kind of fight-or-flight urgency helped drive home the danger facing Gaza’s civilians during Protective Edge, moving thousands to protest worldwide. No matter one’s take on the assault or the reasons behind it, the scale of destruction in Gaza was undeniable, broadcast to the world through livestreams and harrowing images.

The guns, for the most part, are silent now, but for those who survived Israel’s 51-day war on Gaza, the images never fade.

When I caught up with Alashi again this week, he recalled in vivid detail how El Wafa staff evacuated their patients — “one by one on sheets and blankets” — before a July 23, 2014 airstrike leveled the 50-bed hospital, destroying “all [its] buildings, medical equipment, and stored medications.” The aftermath of that attack, which +972 documented here, completed a picture of devastation that needed no further exposition. 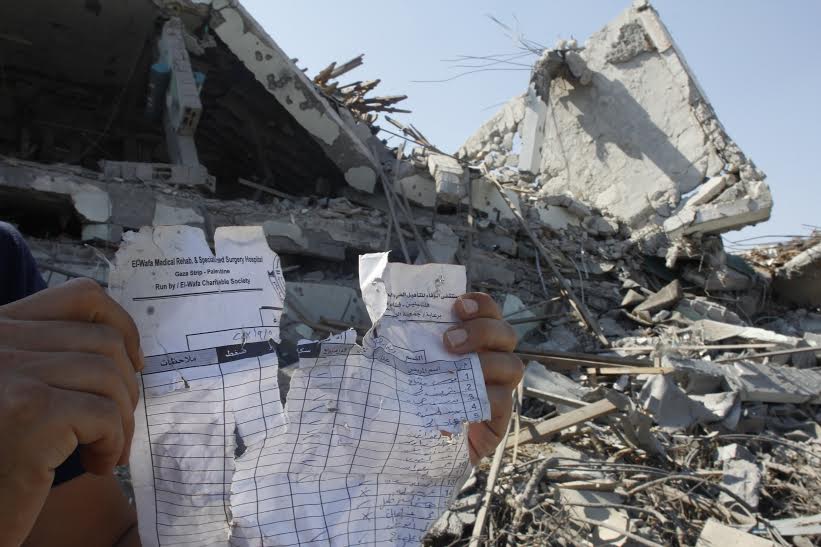 From this August 6, 2014 photo, reminders of a once active, 50-bed facility in the rubble where El Wafa used to be. The July 23, 2014 airstrike that destroyed El Wafa was included in a list of similar incidents cited as “possible war crimes” by Amnesty International. Although Israel’s Military Advocate General has since maintained that the hospital served a “military use,” Alashi has disputed that claim.

But if the airstrike and the events that led up to it evoked clear images of Gaza’s plight, Alashi now struggles to convey the impact of another danger—an ongoing electricity crisis that, according to the World Health Organization, could “leave thousands of people without access to life-saving health care.”

Part of the problem is that speaking about electricity outages can be arduous: power deficits are counted in megawatts, and the impact of sustained cuts is measured in things like raw sewage (which flows in millions of liters from shuttered waste treatment plants). Add to that humanitarian agencies’ year-on-year warnings about Gaza’s dire energy shortages, and it’s not surprising that this latest crisis is garnering less attention than, say, the revamped Hamas charter.

The urgency, however, is real. Although it’s true that electricity shortages in Gaza are nothing new, two developments in the past month have pushed the crisis to an unprecedented level.

On April 16, Gaza’s sole power plant came to a standstill after the Hamas government refused to pay a Palestinian Authority excise tax on fuel purchased from Israel. Without the electricity produced by the plant, some 80 percent of Gaza’s supply now relies on ten Israeli power lines leading into the strip, according to an April 27 press release from the Israeli NGO Gisha, which focuses on freedom of movement for Palestinians. The remainder of Gaza’s electricity comes from Egypt, though Tania Hary, Gisha’s executive director, adds that both sources combined account for only “about 37 percent of demand.”

Reports last week also indicated that the PA had threatened to halt payment for the 120 megawatts supplied by the Israel Electric Corporation, though sources say that Ramallah officials have not yet made good on that threat. Hary explains that, while the money for the IEC lines is technically in Israel’s possession already — as it is comes from customs duties and other taxes the state collects “on behalf of” the PA—the PA is meant to authorize payments made to the IEC.

Meanwhile, Gisha and others have cautioned that the disputes over the fuel and direct electricity purchases are already “causing havoc,” interrupting water distribution to households and forcing authorities to use “the scant electricity available to remove sewage from neighborhoods and prevent flooding.”

These urgent public health needs are forcing administrators at El Wafa, which offers specialized rehabilitation services not readily available in the strip, to make cuts aimed at stretching their energy supplies. The hospital has already sold part of its vehicle fleet, for example, but even with these measures, Alashi estimates that the hospital has only enough fuel reserves to cover about  30 days of operation. After that, he fears, the hospital will have to close its doors to patients.

It’s a prospect that extends to at least 14 other hospitals in Gaza, according to the World Health Organization, which warned in an April 27 release that, absent sufficient fuel, facilities “serving almost 4,000 patients daily will be forced to stop critical services.”

“The situation,” the statement continued, “will be immediately life-threatening for 113 newborns currently in neonatal intensive care units, 100 patients in intensive care and 658 patients requiring bi-weekly haemodialysis, including 23 children.”

Meanwhile, the UN Office for the Coordination of Humanitarian Affairs announced last week that it had released half a million dollars in “emergency funding” earmarked for hospitals. Although it’s unclear how long that amount can sustain operations at Gaza’s hospitals, Gisha says the monthly cost of keeping the ten Israeli power lines running is roughly $11 million.

With that amount at risk, analysts say the Israeli government must choose whether to continue supplying Gaza with electricity. But that choice, according to the Israeli human rights organization B’Tselem, is governed, at least in part, by international law. In a January 2017 brief spelling out Israel’s obligations toward Gaza, B’Tselem argued that the “responsibility of a state to respect the human rights of a particular population is a function of the state’s control over the population.”

“This responsibility,” the brief concludes, “is unrelated to the question of whether Israel continues to be the occupier of the Gaza Strip.” (The UN High Commissioner for Human Rights has maintained that Israel continues to occupy Gaza, a designation that makes the state responsible for the welfare of the civilian population there.)

For Alashi and his team, these legal distinctions offer no recourse as their fuel supplies dwindle and prolonged blackouts continue to be the norm. Since surviving the 2014 assault, El Wafa has rebuilt three of the 11 clinics that once comprised the facility, locating them in an area farther from the border. But if Gaza’s fuel crisis lingers, these, too, could fall silent again.

The difference this time, according to Alashi, is that the world seems silent, too.