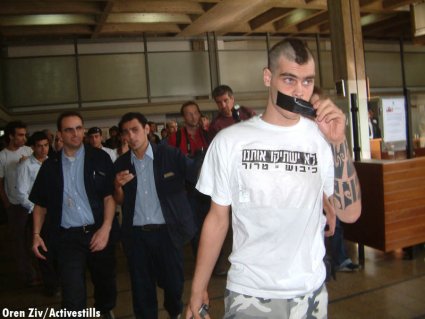 The verdict in the case of Israeli activist Jonathan Pollak, charged with illegal assembly for his participation in a January 2008 Critical Mass ride against the siege on Gaza, will be handed down on December 27, 2010 at 10:00 at the Tel Aviv Magistrates Court. If convicted, Pollak is expected to be sentenced to three to six months in prison. A conviction in this case will activate an older three month suspended sentence, imposed on Pollak in a previous trial for protesting the construction of the Separation Barrier. Tel Aviv Magistrates court judge Yitzhak Yitzhak could feasibly add an additional prison term or other sanctions, in addition to the suspended sentence. Jonathan Pollak is a prominent Israeli activist and graphic designer. He is one of the founders of “Anarchists Against the Wall” and serves as outreach coordinator for the Popular Struggle Coordination Committee.

On January 31, 2008, a group of some 30 activists participated in a Critical Mass ride through the streets of Tel Aviv in protest of the siege on Gaza. During the action, Pollak was arrested by plain-clothes police who recognized him from previous protests and because, as claimed in court, they assumed he was the organizer and figurehead of the event. The protest, however, continued after Pollaks’s arrest and ended with no further incidents or detentions. The indictment against Pollak was filed in 2009.

Pollak’s arrest appears to be the result of police vindictiveness, rather than his behavior at the time of the event; Pollak was but one activist in a group of activists who behaved exactly like him, yet he was the only one to be singled out and arrested. During the court hearings, some of the police officers admitted to knowing him in advance and to recognizing him from previous demonstrations. Moreover, environmental Critical Mass events take place in Tel Aviv on a regular basis, but have never been met with such a response. Other protests, which have caused far more sever obstruction of traffic (e.g. the motorcade protest of tens of thousands of two-wheel vehicle drivers) did not result in arrests, and surely did not lead to the filing of criminal charges and imprisonment.

As the occupation and its crimes persist, so grows criticism of Israel – criticism that Israel does all in its power to repress. The judicial system is one of the main vehicles used by Israel against the resistance movement: Leaders and activists of West Bank popular protests are imprisoned in masses, and even inside Israel it becomes increasingly difficult to protest, resist or voice different opinions.

Please visit this facebook site to support Pollak and receive updates on his case.