Recently, a photograph made waves for its apparent depiction of the disparities in the treatment of Israeli and Palestinian minors. This is what happened to the boys in the photo, with a strange twist involving an Israeli soldier lost in a Palestinian village.

The following story is going to make your jaw drop, as it demonstrates the absurdity of this place, a reality beyond any imagination — especially if you are a Palestinian. This is a story about a family in Jerusalem who encounters the police three times in the span of a few days. Each encounter is its own adventure.

You probably remember the powerful photo shared across social media outlets from a few weeks back. Well, not the exact one, but rather its twin that was sold to one of the big news agencies. This one is very close to the original: 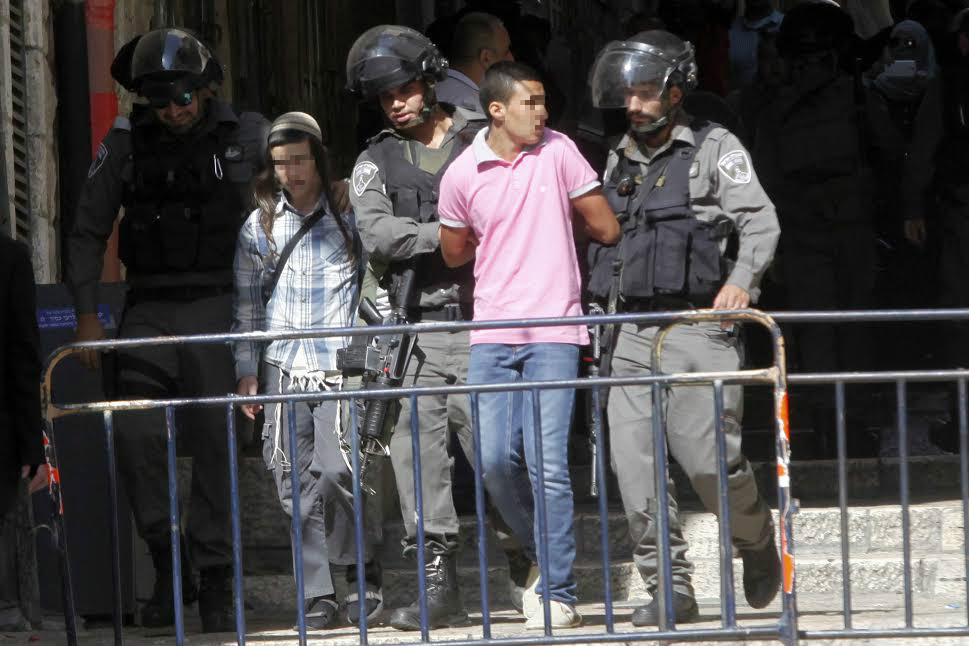 It was taken a few Sundays ago during Tisha B’Av (a Jewish day of fasting which commemorates the destruction of both the First and Second Temples in Jerusalem) in the Muslim Quarter market not far from Damascus Gate. In the photo we see a Palestinian teen being arrested by two Israeli Border Police officers, looking nervous as his hands are folded behind his back. To his left is a Jewish boy, most likely a resident of the Muslim Quarter. A policeman accompanies him, only that the former gently puts his hand on the boy’s shoulder, as if he is strolling with his younger brother. He is even suppressing a tiny smile.

In the original photo the Jewish boy is seen talking to the policeman, and it is clear he feels comfortable with him. One might guess that the reason they are there together is related to something that happened a moment earlier, though it is impossible to know from the photo. The difference in body language between the two boys — and between them and the policemen — is well pronounced, giving the photo its power. They illustrate better than any description what occupation and apartheid look like: a regime based on total separation between two groups that are treated in a very different manner by the government.

But this post will describe what the photo doesn’t reveal, including the sequence of events that occurred before and after it was taken. The story that I bring here relies on the testimony by both the Palestinian teen who was arrested, as well as that of his father.

The father, Muhammed, told me:

My son A,, who is 14.5 years old, traveled from our village, Issawiya, to the market in the Old City. Our friends have a shop there and he went to visit them. My son says a settler boy passed by him, the same one who appears in the photo next to him. Nothing happened between them, and yet that boy went to the cops and complained that my son had hit him. He accused at seven Palestinian children — among them my son — and they were immediately arrested. People who witnessed what happened saw my son being dragged on the ground through the market and then taken to the police station.

At the station, the father says, the seven boys were lowered to the floor and made to sit on their knees while their hands were cuffed.

Anyone who lifted his head up for a moment was hit. My son said the policemen hit them in their stomach, head, back and legs. They tried to scare them while the boys attempted to explain they didn’t do anything and that the settler boy made the whole thing up. But nobody listened to them. They were cursed and beaten. No one called us or contacted a lawyer. They were simply beaten because that boy complained. The entire story became known to us when the photos from the arrest spread in the social media. When I saw it I simply went mad, I ran to the police.

When I got there, they had already released them after they found out that the boy lied. The police just threw the boys out and denied any claim that they had hit them. Ever since my son is constantly anxious. He is still a boy, a good boy. Think about what this does to a child who is arrested and beaten just like that. But look at him, he tells all the people who came to visit him that he is alright and that he’s lucky. Think of all the Palestinians who are arrested and sit in jail without being released after a few hours like he was.

Jerusalem Police responded to the claims as follows:

‘Get me an officer!’

The story was supposed to end here, but the next morning brought about an absurd plot twist.

Muhammed and his family live in the village of Issawiya in East Jerusalem, adjacent to Mount Scopus and the French Hill. While still with his son and family at home, while everyone was trying to go back to their normal routine following the arrest, the phone rang. A friend from the village called Muhammed to come outside to look at something odd: an IDF soldier in uniform walking alone through Issawiya without a weapon, as if he fell out of the sky. “I asked the friend whether he belongs to the Border Police or city police, because that is what we typically see here. But he just answered ‘No, he’s a real soldier — come and see.’”

I went outside and saw a soldier in a navy uniform who looked completely lost. I approached him with a few other people, and he looked a bit stressed. I asked him how he got here, and whether he knew he was in a Palestinian village. He said: ‘I accidentally got off the bus here, the app indicated that it’s here.’ I told him not to worry, and come to my car so that I could drive him to the gas station at the entrance to the village.

WATCH: Muhammed and the soldier in the cab. (Courtesy of Channel 10’s Hatzinor, Hebrew only)

During their trip, Muhammed did two things. First he called the police and told them he picked up a soldier that wound up in the village, that the soldier is being safely transported to the exit of Issawiya where they are welcome to pick him up. Second, he started shooting a video just in case, for whatever blame they may try to put on him. Muhammed was incarcerated for many years because he participated in the First Intifada. Today he is active in the struggle against land expropriation and home demolitions in East Jerusalem, taking a nonviolent approach to fighting the occupation, while maintaining contact with many left-wing Israeli activists.

“You have to understand the reality here,” he tells me, “the police here are looking to blame us for anything. And with my past, if the police see me me, they’ll detain me, they will want to get my car off the road and give me a report. They hassle me about every little thing.”

When they arrived at the gas station, the police who were summoned there had yet to arrive. In the video, Muhammed is seen telling the embarrassed soldier: “I don’t think your government worries about you too much, you must be from the Mizrahim (Jews of Arab descent) — an Iraqi or Yemenite.

“Look, they did not even ask about you. If they were worried, the policemen would have come here straight away!” Then he is heard speaking in Arabic to someone: “A soldier entered Issawiya by mistake and nobody is asking about him. We asked for an officer to come to pick him up and nobody is coming. It must be because he’s a Jew of Arab descent, otherwise they would have recruited the Americans and French to come here too.”

After a while, a police car arrived to pick up the soldier. One of the Border Police officers approached the soldier and said to him: “You know this is a racist village, a village of murderers, you are lucky you weren’t killed,” as Muhammed sat right next to them. When Muhammed protested, the policeman answered him rudely, threatened him and demanded that he get out of there. That moment was documented as well.

Muhammed became upset. “Why do you treat me with such racism?” he asked, “If something would have happened to him, all of the Israeli police would be here, but we brought him here safely. Look at how we behave and how you behave.” Then the police officer in charge came and apologized. “Leave him, he’s just a kid,” he said about the young policeman.

“It is not like there weren’t people from the village who told me that I should leave him there, and let him go to hell. Some of them did not like what I did, but this is really not our culture. You see him without a weapon, scared, alone, with nobody around him. He’s a human being. No one knows more about this feeling than I.”