With just a few months left in office, the U.S. president made sure to deliver a message to the Israeli people, and more pointed one to its leader. 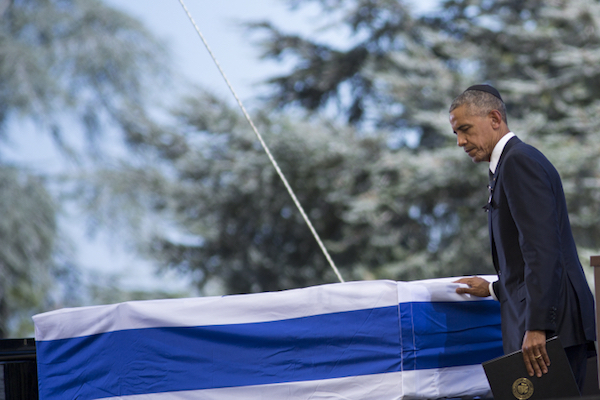 Nearly every aspect of Friday’s state funeral for Shimon Peres, who died this week at the age of 93, had a subtext, or could be seen as a metaphor.

The passing of the last member of Israel’s founding generation (in Hebrew: Generation of the State / דור המדינה) felt as though someone ended a written sentence with a full stop marked in thick-tipped black marker. The End. The end of the aspirational ideals of the socialist generation; the end of the days of aspiring toward a democratic, fully representative state; the end of looking at history as progressive instead of stagnant.

It fell to Barack Obama to highlight all the symbols and ironies both in Peres’s life and in the way his funeral was conducted. The U.S. president tied together the threads of the historical events Peres witnessed and participated in over his long life, even as he (Obama) channeled an idealized version of that life to deliver a deeply nuanced lecture to Israelis. At the risk of coarsening his message with reductiveness, it could be parsed down to one sentence: What kind of state do you want to be? 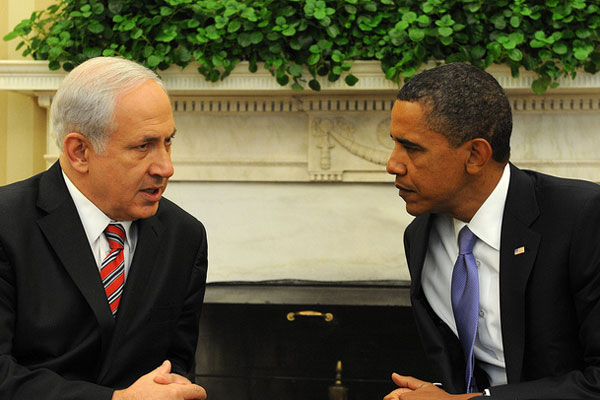 Excerpts from President Obama’s eulogy (watch it here), with my interpretation of the subtext in italics:

Zvia, Yoni, Chemi and generations of the Peres family; President Rivlin; Prime Minister Netanyahu; members of the Israeli government and the Knesset; heads of state and the government and guests from around the world, including President Abbas, whose presence here is a gesture and a reminder of the unfinished business of peace; to the people of Israel:

Do you want to be the kind of state that is led by Benjamin Netanyahu, a man who just today humiliated President Abbas, the man who is ostensibly his partner for peace, by refusing to even acknowledge him in his own eulogy? Or do you want to be led by someone who is gracious and generous; someone who understands that basic courtesy requires him to express appreciation to Abbas for having come to pay his respects — even though it meant losing yet more respect from his own people, having to request permission from the Israeli army that controls his movements, and sitting through the funeral on Mt. Herzl, named for the founder of Zionism.

And just as he understood the practical necessity of peace, Shimon believed that Israel’s exceptionalism was rooted not only in fidelity to the Jewish people, but to the moral and ethical vision, the precepts of his Jewish faith. “The Jewish people weren’t born to rule another people,” he would say. “From the very first day we are against slaves and masters.”

Between you and me, I know that Shimon Peres was not an observant Jew. But he did care deeply about the Jewish people (let’s leave aside for a moment that you might not have agreed with his goals or deeds) and, while he was indeed one of the original fathers of the settlement movement (of course I know that), in later life he came to see the folly of the settlements. True, he never succeeded in rolling back a single centimeter of settlement expansion, but by late middle age he recognized the destructiveness of the movement he had played a role in creating. He changed his mind. And I, a black American man with a deep knowledge and consciousness of history, am telling you: nothing good will come from being the lords of the land with the Palestinians as your slaves.

Because of his sense of justice, his analysis of Israel’s security, his understanding of Israel’s meaning, he believed that the Zionist idea would be best protected when Palestinians, too, had a state of their own.

Perhaps you will listen more closely if I mention Zionism, which I know you value highly even though you can’t really define it, as a means of emphasizing that you must end the occupation if you want to survive — morally and physically.

In many ways, he reminded me of some other giants of the 20th century that I’ve had the honor to meet — men like Nelson Mandela; women like Her Majesty, Queen Elizabeth — leaders who have seen so much, whose lives span such momentous epochs, that they find no need to posture or traffic in what’s popular in the moment; people who speak with depth and knowledge, not in sound bites. They find no interest in polls or fads.

Unlike Benjamin Netanyahu, who has created an image with no substance out of sound bites. People of Israel, awake! Your leader is a fake.

As an American, as a Christian, a person partly of African descent, born in Hawaii — a place that could not be further than where Shimon spent his youth —

Let me just take this opportunity to dig a bit at Benjamin Netanyahu, who has never missed an opportunity over the last eight years to insult me or incite against me. This is for the 2012 campaign, when he overtly supported Mitt Romney, who in turn promoted Trump’s birther conspiracy — i.e., the lie that Obama is a Kenyan-born Muslim.

The last of the founding generation is now gone. Shimon accomplished enough things in his life for a thousand men. But he understood that it is better to live to the very end of his time on Earth with a longing not for the past but for the dreams that have not yet come true — an Israel that is secure in a just and lasting peace with its neighbors. And so now this work is in the hand of Israel’s next generation, in the hands of Israel’s next generation and its friends.

Right now, your country is led by a cynical prime minster who cares only about remaining in power. Does the hope for peace and equality and reconciliation with the Palestinian people, which Peres represented as an aspiration (even though not as a reality), lie in that coffin I just bowed to? Or will you rise up from your passiveness and from your fears and do something brave and generous: Share the land, make sure everyone living in it has equal rights, and look forward with optimism rather than backward with fear.

How Barack Obama really viewed the life and accomplishments of Shimon Peres is not really the point here. I think he genuinely found him warm, charming and intelligent — as did most people, no matter what they thought of his politics. The point is that Barack Obama, in his final months in office, took the opportunity of this massive state funeral to convey his thoughts and feelings about the future of Israel and Palestine.

Obama long ago failed to cajole Netanyahu toward lifting Israel’s military occupation. To be fair, I don’t think there is a person on earth who could force Netanyahu to this goal.

It took the president rather a long time to realize he was dealing with a totally recalcitrant and unmovable person who lacked any vision for the future beyond the preservation of his own power. Once he did internalize that message, as well as the very clear signs that Netanyahu had no problem insulting the president over and over, Obama very understandably turned away. But he still had a message to convey — a message of aspiration and encouragement.

And so, on Friday morning in Jerusalem, he conveyed that message.