Netanyahu called Trump and Putin’s ceasefire in Syria a ‘bad deal.’ But it could be the one thing that prevents Israel from being dragged into war — whether by miscalculation or military escalation.

The dramatic announcement by presidents Trump and Putin of a ceasefire in “south-west Syria” earlier this month was greeted in Israel with skepticism. Official Israel wasn’t impressed with the agreement reached by the two superpowers to establish and enforce a buffer zone on Israel’s northern border in the Golan Heights, free of all military activity.

In the first Israeli cabinet meeting held after the ceasefire agreement was announced, Prime Minister Benjamin Netanyahu spoke in stipulations: “Israel will welcome a genuine ceasefire in Syria but this ceasefire must not enable the establishment of a military presence by Iran and its proxies in Syria in general and in southern Syria in particular.” One week later, at a press briefing in Paris, Netanyahu called the ceasefire a “bad deal” and declared Israel’s opposition to it.

Israeli Defense Minister Avigdor Liberman was even more scathing. Israel is not obligated by the ceasefire deal and reserves “absolute freedom of action” to respond to developments on the ground as it sees fit, according to Liberman, irrespective of the understandings reached between Trump and Putin.

Most of the analysis in Israel fell in line with Netanyahu and Liberman, minimizing the agreement and ignoring any strategic value it might have for Israel. That is a mistake. There is more than meets the eye in this agreement.

Defense Minister Avigdor Liberman (L) visits at an army exercise of the IDF Golani Brigade together with the Combat Engineering Corps, armored corps and artillery in the Golan Heights on February 21, 2017. (Ariel Hermoni/Ministry of Defense)

Even if the ceasefire agreement doesn’t fully address the entire enforcement arrangement, it does indicate American involvement in Syria in the era that follows the routing of ISIS and the conquering of its de facto capital, Raqqa. The agreement, therefore, should alleviate Israel’s concerns about the vacuum that would be created if the Americans left, which would negatively affect the situation in the Golan Heights.

The ceasefire agreement also came at a critical point in time for Israel. The calm fostered on the ground helped prevent Israel being dragged into the war by miscalculation or unplanned military escalation.

Several days in a row in June 2017, we saw daily reports of the IDF attacking Syrian military targets in response to artillery or mortar fire into Israeli-controlled territory. The routine of errant shells falling in Israeli territory now included an automatic IDF response, including official statements along the lines of, Israel won’t accept any violations of its sovereignty. The prime minister promised strong responses, and that’s what happened.

Despite repeated declarations that Israel has no interest in being dragged into the war in Syria, a doctrine of maintaining operational freedom and automatic military responses to errant fire was ultimately likely to bring about unplanned results. There is no deterrence in this scenario, because it is unclear how one is supposed to deter a party who isn’t trying to strike you in the first place. Contrarily, massive responses that kill Syrian army officers and soldiers are likely to hasten an undesirable escalation. Under circumstances of existing military friction, it is always hard to know when and how two parties will cross the threshold of low-intensity conflict into something more serious. 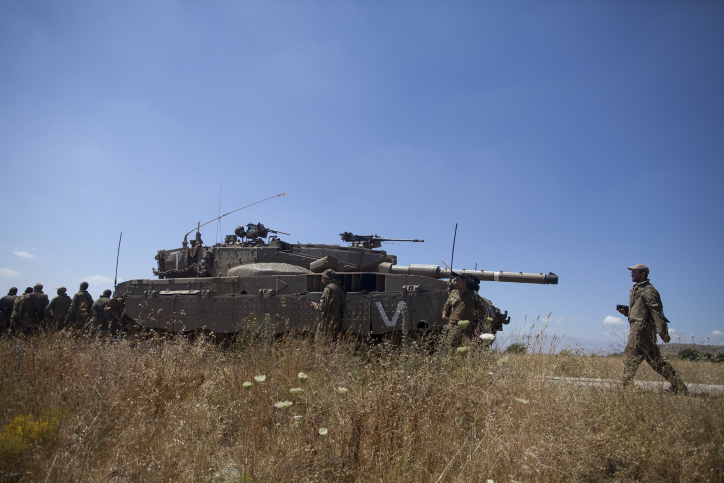 Israeli soldiers seen during patrol in the Golan Heights after a 15-year-old Israeli boy was killed on June 22, 2014, in what the IDF said was a missile attack from Syria, just south of the Quneitra crossing. (Flash90)

At the same time, another risky development was taking place: a demand “from the field” to increase the humanitarian and medical aid that Israel provides Islamist “rebel” groups, and introduce more military elements. For example, creating an Israeli-enforced “security zone” like the one it held in southern Lebanon, gradually and unintentionally getting sucked into a military confrontation with the Syrian army.

And that’s where Iran comes into the picture. Netanyahu has declared red lines in Syria more than once, at least one of which is geographic: preventing Iran gaining a foothold in the Golan Heights. Publicly declared red lines and using military force against Assad’s army in the Golan were meant to draw a line in the sand, and sending a message to the other side, including Iran, not to cross it.

But are automatic military responses that could lead to unplanned and undesirable results really necessary? Sometimes less is more. Moreso, Netanyahu’s messages and red lines have already been heard and his geographic red lines achieved the desired result. Iran got Israel’s deterrent message loud and clear when the latter killed a Revolutionary Guard general who was touring the Golan in January 2015 — it doesn’t come near anymore. Israel and Iran have not been involved in any confrontation in the Golan since, and there is no Iranian military presence there. A military analysis of the situation shows that Iran was not enthusiastic about a direct confrontation with Israel. The deterrence is working, and the red lines are holding. 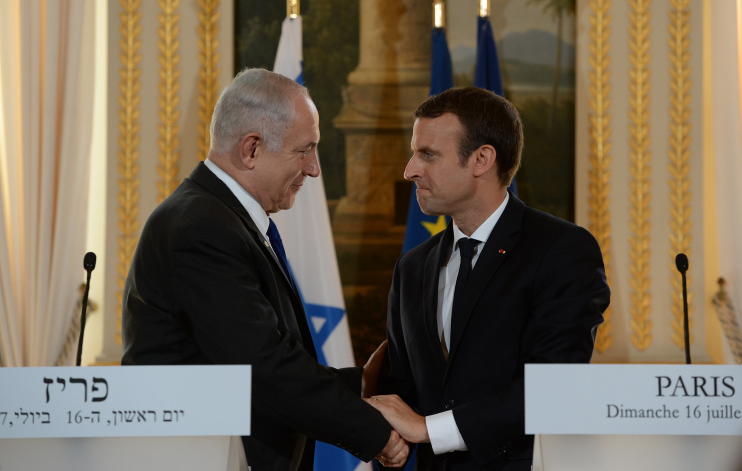 That, and more. In the press briefing in Paris in which Netanyahu declared his rejection of the ceasefire deal, he also basically admitted that there is no Iranian military presence in the Golan Heights. The Israeli prime minister revealed that the agreement forbids any Iranian military presence within 20 kilometers (12 miles) from the border of the Israeli-controlled half of the Golan Heights, thereby acknowledging for the first time that Iranian forces are closer to Damascus than they are to Israel. We can assume that Iran — through the Russians — gave its tacit approval to the diplomatic arrangement that bars its troops from the Golan Heights. That is an important contribution to the stability of that area and a strategic accomplishment for Israel. A diplomatic agreement that is in line and affirms the military situation.

Netanyahu’s maximalist argument against the Russian-American-brokered ceasefire deal in the Golan Heights is that it perpetuates an Iranian military presence in the rest of Syria. But his argument presumes if and isn’t reflective of anything on the ground. Along those lines, we continue to hear a term that has gained popularity as if it were some unquestioned strategic accord: the Shi’ite Crescent, a supposed territorially contiguous corridor of Iranian military control from Tehran all the way to the Mediterranean Sea (around 1,400 km, or 870 miles). Perhaps it is a nice concept on paper, but it’s very difficult to see how one realizes a “crescent of Shi’ite control” and how one creates an “Iranian corridor” on the ground — in such a broad area and chaotic area so vulnerable to terrorist groups. And all that using the limited power of the Iranian army and air force?

The “Shi’ite Crescent” is a nice metaphor but reality on the ground is entirely different. Don’t forget that Iran was forced to bring home a large part of its Revolutionary Guard forces that it sent in the earlier stages of the Syrian War — and replaced them with mercenary militias from Afghanistan, Pakistan and Iraq.

But back to diplomacy. Wars end in conferences or in diplomatic formulations — and that is the direction one can see for Syria from the Russian-American agreement. The diplomatic arrangement inside sovereign Syrian territory through the creation buffer zones (“de-escalation” zones in diplomatic terms) by the two major powers is preferable for Israel over relying solely on military forces and a doctrine of setting red lines. The rules of the game of sending signals and deterrence are inherently elusive and likely to collapse unexpectedly. It is preferable, therefore, to incorporate the rules of the diplomatic game and diplomatic arrangements, which are far more durable.

Furthermore, in the event of an escalation into warfare on the Syrian side of the Golan, Israel would be hard-pressed to find any international legitimacy for exercising a large-scale military option — like a preventive strike — in sovereign Syrian territory from the territory it controls on the other side of the Golan. Let’s not forget that the world rejected Israel’s annexation of the Israeli side of the Golan, which it considers null and void according to UN Security Council Resolution 497. Every single plan that the international community has formulated to end the civil war in Syria includes some variation of an opening clause declaring the need to preserve Syria’s territorial integrity, which is one of the only points upon which both the Assad regime and the rebels both agree. 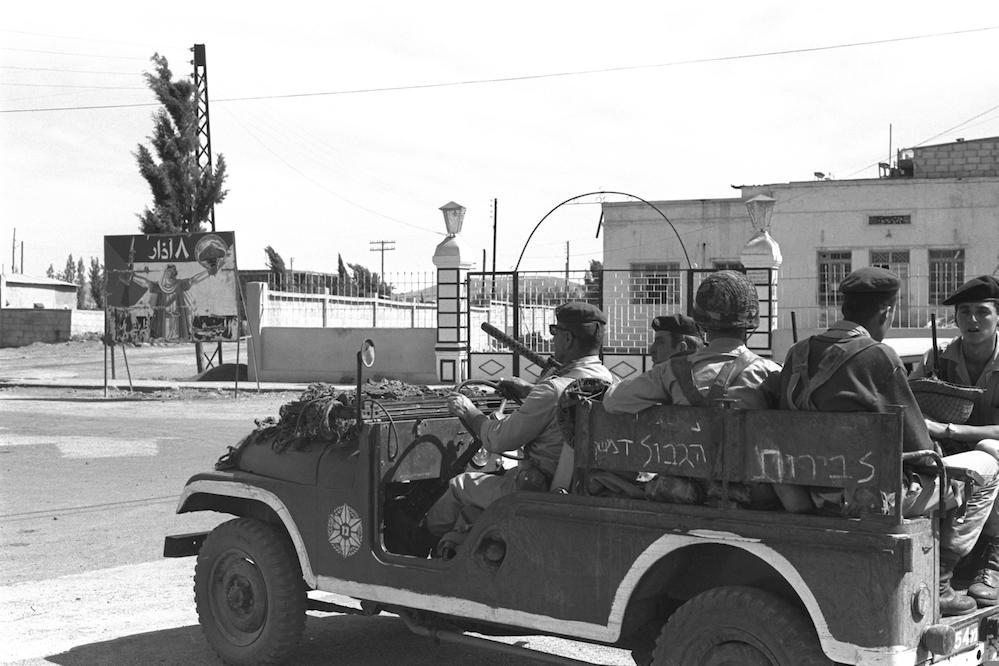 Israel’s security interests first and foremost focus on those areas abutting its borders. Therefore, it is better for Israel to join the American-Russian process of resolving the war in Syria. Even if such arrangements mean the return of the Syrian side of the Golan Heights to the control of the Damascus regime. In such a scenario, the American-Russian agreement is likely to rehabilitate and strengthen the UN troops in the Golan Heights (UNDOF) which has been there since the ceasefire that ended the Yom Kippur War in 1974. The UN observer force, whose mandate is to supervise demilitarized zones in the Golan Heights, could gain new momentum — this time with regards to the indirect agreement with Iran. A renewed (and reinforced) UNDOF mission is the answer to the question that so bothers Israel: who will monitor the “de-escalation zone” along its border on the Golan Heights.

A diplomatic process jointly led by the Americans and Russians, and the tacit and indirect agreement with Iran to re-demilitarize the Golan Heights, could make a the best contribution to creating a stability we don’t have today. From Israel’s perspective, that means distancing Iranian military forces from the Golan Heights and minimizing the risk of an unplanned and undesired military escalation.