Twelve-year-old Fares al-Khodor sold roses in West Beirut for five years until he was killed in an airstrike during a visit to his hometown in Syria. Touched by the massive outpouring from people who knew him in Lebanon, artist Yazan Halwani brought his memory all the way to Germany. 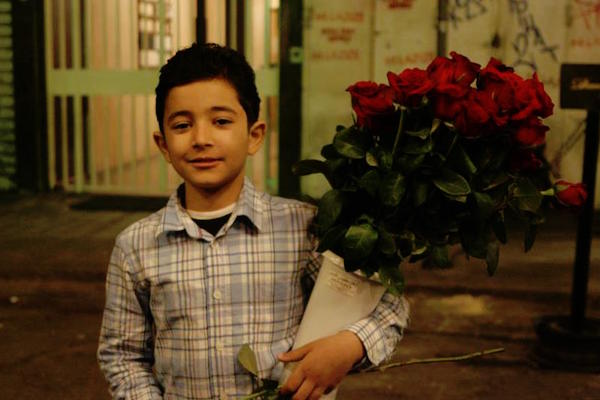 Yazan Halwani, a Lebanese street artist known as “the Banksy of Beirut,” went all the way to Dortmund, Germany in order to paint a portrait of Fares, a refugee Syrian child who was killed recently in the ongoing war.

Fares al-Khodor, 12, charmed business owners and passersby with a special smile and and captivating personality on Hamra Street in West Beirut, where he sold roses. He first came to Lebanon in the end of 2010 at age seven with his family and quickly became a fixture on Beirut’s streets, lugging around his makeshift vase of roses.

Fares was killed in a coalition airstrike that missed its target and hit his family home in the northern Syrian city of Hasakah in July. He and his family visited their hometown every summer.

“I did not know him as well as others,” Halwani wrote on his Facebook wall, “[but] I remember him and his distinctive smile from the few times I bought flowers from him.”

“I decided to paint him on a building in Dortmund (Germany) during the Huna/K Festival, so that he can keep on spreading his positive vibe, and charming pedestrians to buy flowers from him,” Halwani continued. “I think I also wanted to say that people who flee their houses in Syria have a good reason to do so. Fares was not an add-on to Beirut, he was an integral part of it; during his stay in Syria he was not safe. I regret not painting him during his life.” 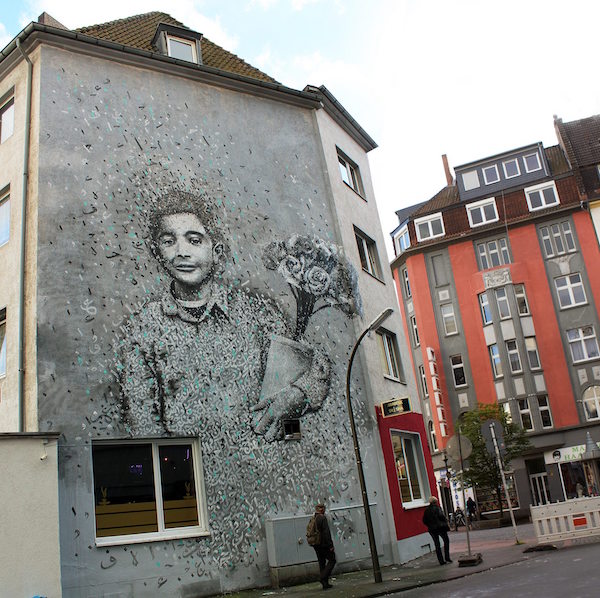 Halwani, 22, was invited to Dortmund by the organizers of the Huna/K Festival of art and Arab culture, which began last week and will continue until October 4. He enlisted the help of the Anne Frank School in the city, whose students enthusiastically pitched in. The students were split into three groups: one that worked on the drawing on the wall with Halwani, another that dealt with the Arabic calligraphy that was also drawn on the wall, and a third that documented the entire project.

Explaining why he created the mural in Germany and not Beirut, Halwani wrote, “I wanted to do a mural worthy of the little man, and the wall that was offered to me in Germany was the size that he deserved.”

Halwani also said he hopes the mural of Fares will have a wider political and social impact amid the refugee crisis that after years of affecting Lebanon, is now reaching Europe. Politicians and regular citizens often portray refugees as “alien organisms,” Halwani wrote. “I think by painting Fares, telling his story, showing how he was part of the identity of Beirut, and highlighting the sad ending to a beautiful person, might change the perspective that people around the world have of a refugee to a more positive direction.”

The portrait of Fares holding a bucket of roses, with his delicate smile and sharp appearance and gelled-back hair, is based on a photo by Beirut photographer Hussein Baydoun.

“Fares was a wonderful child,” says Baydoun, who would run into Fares on a daily basis outside his Beirut studio. “He always smiled at people. For anybody who ran into him on Hamra Street, and certainly anybody who worked there or passed by there, he was a part of the scenery, and they fell in love with him. His dream was to be a lawyer, so that he could made sure no children ever had to live on the streets. ‘I want to protect them,’ he would always say. His family immigrated to Beirut a little before the war broke out but they maintained close ties to home. They would spend the summer months there each year, although that became more difficult and dangerous as the war got worse.” 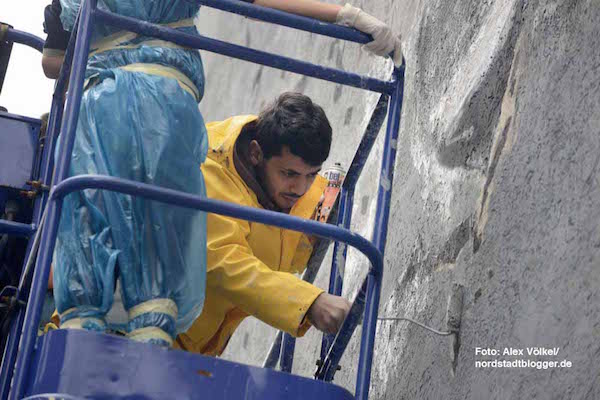 Yazan Halwani working on the mural of Fares in Dortmund, Germany. (Photo by Alex Volkel) 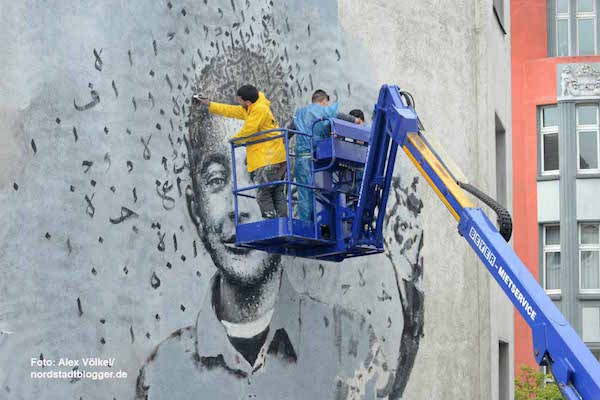 Yazan Halwani, joined by local students, working on the mural of Fares in Dortmund, Germany. (Photo by Alex Volkel)

Some responses to Fares’s death that I found on the Internet, and which demonstrate what a special child he was:

“Fares was not just another child flower seller. He was a shining boy who worked hard and made everyone around him smile and feel good. He knew how to become a better person out of his own pain and hardships,” one read.

Another tells how “he was the best flower seller I’ve ever met. The rest of the children wanted to be him. I noticed that everyone started using gel, to try and dress sharply like him, in order to succeed like him. He invented something. Before him it was always the opposite: in order to make money you had to look neglected and dirty. Collect a little charity. Fares would never accept money from somebody who didn’t buy a flower.”

One Beirut resident who spent a lot of time on the street where Fares sold his flowers, and who befriended him, told a Lebanese newspaper that one night Fares insisted on taking him out for dinner at a restaurant. “It should have been the other way around,” he said, “but he wouldn’t have it any other way.”

Many people called him “the mascot of Hamra Street,” and showered him with praise. Fares once told a newspaper that did a profile on him that “Hamra Street is my family.” The news of Fares’s death in the Syrian war spread through the neighborhood quickly and the mourning was widespread. That mourning descended on Hamra Street and spread through West Beirut. The local media covered the tragic story, and social media quickly filled with messages from heartbroken people whose lives had been touched by Fares, wandering Hamra Street selling roses out of a small bucket to support his family.

Many cafe and store owners and regulars on Hamra Street — Fares’s family — held a memorial service and lit candles and left roses next to a copy of The Little Prince that somebody left on the street.

Fares al-Khodor is one of tens of thousands of Syrian children who have been killed in the ongoing Syrian civil war. It is estimated that over 200,000 people have been killed thus far in Syria.