There were non-lethal ways to preempt Hamas’ underground attacks, but the Netanyahu government rejected them all.

Here is the current, ostensibly airtight rationale for whatever the IDF chooses to do in Gaza: armed Hamas militats are coming up out of tunnels that start in Gaza and end not far from kibbutz and moshav communities on the Israeli side. So if the IDF doesn’t go as far into Gaza as necessary to destroy the last of these underground passages, sooner or later Hamas will succeed in carrying out “catastrophic” terror attacks, as Netanyahu puts it. The army has stopped several of them since Thursday night’s ground invasion of the Strip; today (Monday) soldiers were wounded in Israeli territory stopping another one. 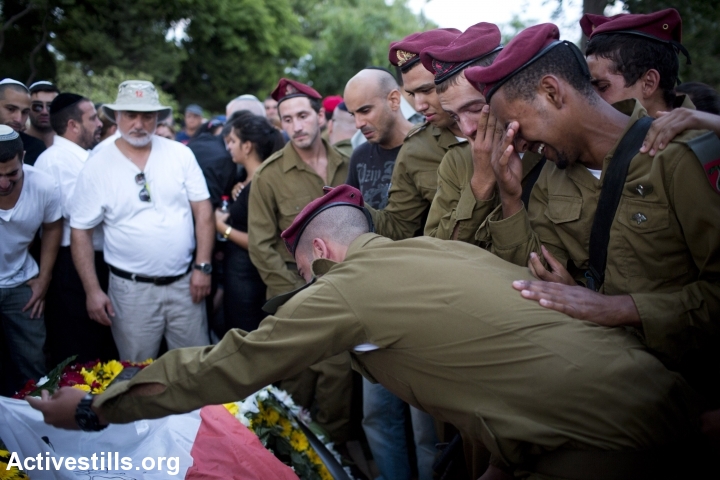 The IDF’s war to wipe out the threat from the tunnels is not an aggressive operation. It’s a preemptive attack, a completely defensive operation. … Imagine if someone in Hamas makes the decision to send out on some dark night, by surprise, teams of commandos through all the tunnels, and they go on a killing spree in the communities near the Gazan border. …

It’s true that many soldiers [13 – L.D.] were killed tonight. It’s likely that more will be killed. But think of the alternative. How could we look kibbutz or moshav members near Gaza in the eye if a commando unit were to infiltrate and kill dozens of their people? Now that we know the tunnels are there, we can’t allow ourselves the luxury of doing nothing about them.

Israel could have preempted the tunnel attacks by ending the occupation; and failing that, by not provoking this war; and failing that, by accepting a ceasefire on humane terms. But Israel’s answer is no, no and no, so truly, the only choice it leaves itself if it wants to protect its citizens near the Gazan border is to send Israeli soldiers charging into Gaza, killing and getting killed.

Israel provokes Hamas into a war that escalates to the point where Hamas is fighting a war of survival, using everything it’s got, including tunnels for attempted terror attacks in Israeli territory – and Israel says, “Look what they’re using! My God! We can’t let them have that kind of capability – they’ll use it to kill dozens of people!”

If somebody hasn’t said it already, I don’t think it will be long before we hear, “Lucky for us that Hamas forced us to invade; otherwise we wouldn’t have known about all those tunnels.”

Israel can play this game with any of its enemies. Hezbollah has 100,000 rockets and missiles pointed at this country; they haven’t fired a single one in eight years, since the Second Lebanon War. But let’s go provoke a war with Hezbollah, they’ll start firing thousands of rockets at us – Iron Dome can’t shoot them all down – and we’ll say, “You see? They’re firing thousands of rockets at us, we have to go into Lebanon and destroy them all.” We can play the same game with Syria, with Iran, with anybody.

Could it be that they weren’t so eager to use everything they’ve got, to invite Israel’s wrath, to fight a war of survival?

But very few Israelis have any interest in questioning Operation Protective Edge. Israelis generally don’t ask a lot of questions about matters like these even between the wars, so they’re certainly not going to ask them now.

Related:
‘Cast Lead was a joke compared to this’
Mourning death wherever it strikes
PHOTOS: Scenes of devastation from deadliest day in Gaza
WATCH: Dozens of bodies strewn in the streets of Gaza