On the face of it, a protest by Likud youth against one of Israel’s most prominent newspapers seems like a non-issue. But in the context of last summer’s war and the growing threats against left-wing journalists, freedom of the press may no longer be able to protect the media.

Journalists, editors, media outlets – we all love simple stories. Something straightforward, black and white, good or bad. And this is what makes it harder for me to admit that the Likud party’s demonstration in front of the Yedioth Ahronoth daily’s building on Sunday night is not a simple story. In fact, it brings up more questions than answers.

On the one hand, there is the issue of democracy and free speech. In the democratic country that we strive to be, every person or organization is allowed to express their opinion on any matter, including against the media, as long as it does not lead to incite against or harm others. 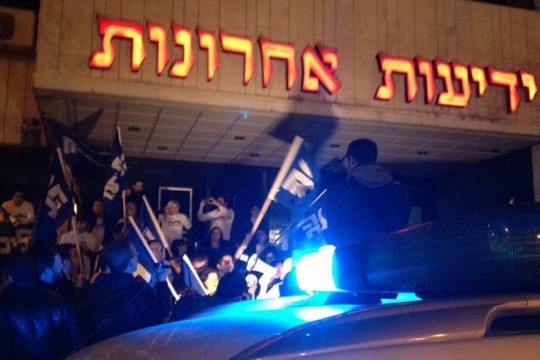 A protest held by the Likud youth chapter against Yedioth Ahronoth. (Nir Gontarz)

On the face of it, Sunday night’s protest played by the rules of democracy: an organization merely protested because it felt wronged. But from here on out it starts to become more complicated, especially since we are not talking about just any organization, but about official representatives of the ruling party (the demonstration was organized by the chairman of the Likud youth chapter), who are openly protesting against one of the leading media outlets in the country. And this is just a week after the prime minister himself called on his supporters to “be brave and attack the media.” Over what? It doesn’t matter – just attack.

Every organization, including the ruling political party, has ways to critique the media. They can investigate, reveal hidden interests, lodge a complaint with the Israel Press Council, lodge a complaint with the police or open a competing news outlet. True, neither side of the political spectrum is innocent, and the attempt to pass a law against the pro-Netanyahu Israel Hayom newspaper on the one hand, or what is seen as a direct attack on Channel 10 (which is often critical of the prime minister) on the other, are perfect examples of this. But in our fervor as journalists to protect the holiness of freedom of speech, we fall into the trap of our own memory span and forget the context.

“I don’t think we have seen such a protest by the Likud youth since the days of Oslo,” wrote the group’s chairman, David Shayan, who was in charge of the protest in front of Yedioth. For all those who are too young to remember, that is the same Oslo that led the current prime minister to stand on a balcony in Jerusalem while protesters below him waved photos of then-prime minister Yitzhak Rabin in an SS uniform. We all remember what that led to, but I will give Shayan the benefit of the doubt that his comparison to Oslo was a mere coincidence. 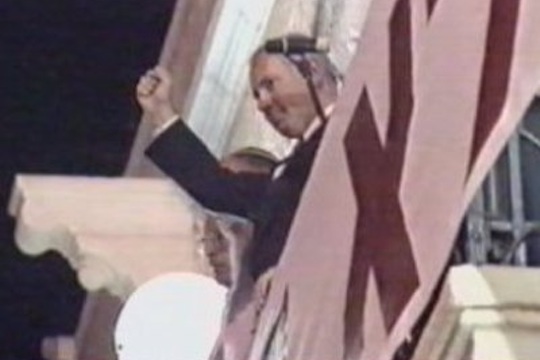 It is true that Israeli journalists have not been physically harmed. There was only minor incitement against them during the Gaza war, and Haaretz columnist Gideon Levy was forced to walk around with a body guard. “But hey! Nothing really happened,” some claim. It is also true that the Likud demonstration was neither violent nor did it call to physically harm any of Yedioth’s workers, who were working just two floors up at the time.

Sunday’s protest may have been full of dorky students, but who can promise that next time it won’t be full of hot-tempered jerks? Who can promise that protests don’t lead some extremist right-wing teenager to take his or her own initiative?

More than anything, the demonstration reminded me of the story of the frog and the boiling water. A frog that is thrown into a pot of boiling water will immediately jump out and run away (please don’t try this at home). On the other hand, a frog who is placed into a pot of water that is slowly heated won’t feel its surroundings reach a boiling point until it is too late.

And this brings me back to the questions. “Will demonstrations lead to the next assassination? Isn’t this a bit too much?” asked a journalist friend. I have no idea, but I will be happy to be proven wrong.

Right now, I keep thinking about about what another journalist friend said, just five minutes later: “The next assassination will probably target a journalist. And then everyone will shirk their responsibility and say that it was just a case of a few rotten apples.” By that time, being proven wrong will be of little help.

Gaby Goldman is an Israeli journalist and an editor on +972’s Hebrew-language sister site, Local Call, where this article was originally published in Hebrew.

Related:
Press freedom in Israel: Democracy in the age of self-censorship
Editorial: Demanding freedom of movement and access for Palestinian journalists