A recent Tablet piece described J14 protesters as “entitled yuppies” who would be unwilling to support more pressing social calls or defend their country at wartime. Yet by urging Israelis to go back to debating security concerns or the Palestinian delegations bid for statehood at the UN, the author of the article reveals a real fear of change to Israel’s social and political order

By Noam Sheizaf and Dimi Reider 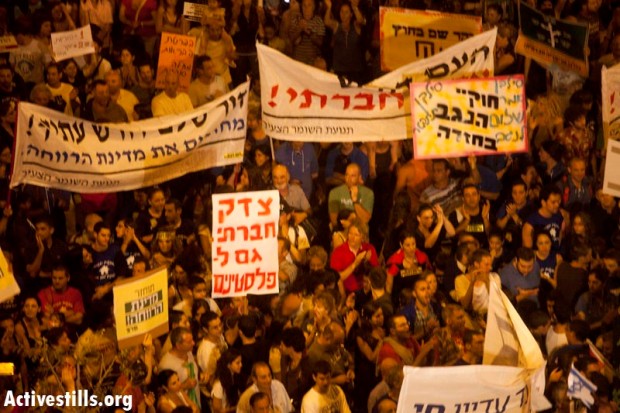 Perhaps the safest statement one could make regarding the effect of the tent protests spreading across Israel is that it’s too early to make any statements. The demonstrations so far have been unprecedented in their size and they have endured beyond the most optimistic expectations. Surprising new coalitions have emerged and political parties are still struggling to find the meaning of this sudden change of tone in the public debate. While many, both on the left and the right, criticize the protests, few dismiss their importance. This is why we were so surprised to read this Tablet piece by Yoav Fromer called “Generation א.” In the article, Fromer labels the protests a bourgeois charade, initiated by “media-savvy” spoiled Tel Aviv kids who mobilized Israelis “for the wrong cause[s].”

Calling them “selfish” and self-centered, Mr. Fromer takes his first shot at the initial organizers of the protests for failing to join other, more noble, causes – the doctors’ strike, the struggle of single mothers or the Holocaust survivors over their pensions. Of course, these accusations could be directed at others as well: The doctors could be accused of not helping single mothers, whose situation is much worse than their own, and both groups seem to be indifferent to the occupation, which is still not as bad as the famine in Somalia. In short, almost every mass-movement could be charged with selfishness or hypocrisy; the truth is that people tend to mobilize for their own interest everywhere, and it is through their political activism that they are able to unite in fighting for mutual causes.

This is nowhere more manifest than in the movement Mr Fromer chooses so scathingly to condemn for its alleged selfishness: The tent protests have galvanized the physicians’ strike and led to an improved agreement with the treasury; the younger physicians, the residents, were radicalized by the experience of the protests and are now digging in for a longer fight. Tent protests and physicians have joined forces on many occasions, and there’s a permanent public health campaign tent on Rothschild Boulevard. But the solidarity network extends to even more unlikely allies: The tent protesters even managed to win the tacit support of the Policemen’s Wives Association, the shadow-union of the Israeli police.

Fromer then moves on to the oldest accusation of all in Israel – the failure to fight in the state’s wars, choosing instead one’s own selfish desires:

The geographic, socioeconomic, and ethnic divides that have split Israeli society and prevent mass mobilization became clear during the 2006 Second Lebanon War and the 2008 Operation Cast Lead in Gaza, when tens of thousands of Israelis living along the northern and southern frontiers were huddled into bomb shelters while the restaurants and bars in Rothschild Boulevard—the Bastille to this contemporary Israeli Revolution—were as busy as ever.

Mr. Fromer’s claim that in the past the entire Israel society mobilized at times of war is inaccurate, to say the least: As most history books note and many Israelis remember, rants over Tel Aviv’s crowded cafes were popular with the Israeli Right during the first Lebanon war in 1982, and even during the war of Independence in 1948. But what one should  really be aware of is not the lack of historical accuracy, but the mechanism which leads to “a call to arms” whenever a progressive movement is asking to reform the civil society in Israel. Echoes of Mr. Fromer’s reasoning were to be found in some of the responses to the recent attacks in the Israeli south, which urged protesters “to fold the tents and go home.” There is always someone to remind Israelis that the only thing they should be discussing is national security.

It is our belief that the dominance of the geo-political question and the security-oriented debate—in his last paragraph Mr. Fromer even invokes the threat of a new Intifada—serves to prevent a national conversation from taking place in Israel on any issue, be that the economy, the status of the non-Jews under Israeli control or the fate of the settlements. In fact, the most fascinating development following the emergence of the protest movement is the reopening of a whole field of political questions that Israelis all but ignored for decades.

For a month, Israelis have been debating not only monetary systems and the cost of the settlements, but also the relation of the ultra-Orthodox minority to the state and the rights of Arab citizens; racism and social benefits for refugees in south Tel Aviv; the IDF’s budget; one-state, two-state and no-state solution. It’s not that the “old” political questions have been abandoned, as Mr. Fromer suggests, but rather that new ways to deal with them are being examined. These issues are discussed everywhere – in the op-ed pages of the papers and every evening in dozens upon dozens tent camps; in the blogosphere and in expert committees formed by both the government and the protesters. Yet Mr. Fromer mocks this national debate, and urges Israelis to focus on the Palestinian bid for statehood at the UN, where the conversation is controlled by politicians and security experts, who have been lecturing a tired and indifferent public for years.

Indeed, the revolutionary aspect of this protest is not in an expressed desire to change the government—in fact, we find the current political alternatives to be just as hopeless—but rather in the call to change the nature of politics in Israel, the very structure that frames the political debate. It is plainly evident to anyone who has actually visited the tent camps, that this is the widest grassroots political event this country has ever seen, with groups interested in almost any political issues using the opportunity to present their agenda. And while it’s true that the protest started in Tel Aviv, huge rallies have already taken place in Beer Sheva, Haifa, Afula, Hadera, Netanya, and many other towns that were never part of the political game. And yes, Holocaust survivors, doctors and single mothers are part of this protest – and of the reinvigorated public discourse.

Furthermore, never before have so many Palestinians taken part in a grassroots protest that started with the Jewish elites, and large demonstrations were held in Nazareth, Bakah el-Garbeih and other Arab towns; the main rallies in Haifa and Beer Sheva were emphatically mixed Arab-Jewish. Sephardic and Ethiopian Jews were speakers at many of the events and had tent camps almost from the first days of the protest. Many of these daily events don’t make it to the press, but their effect on the people involved in the protests is unmistakable, and their success in finding mutual respect and common ground on “secondary questions” is already empowering and encouraging them to break new ground on the “primary” ones.

As we said, the result of this “summer of unrest” in Israel is yet to be seen. It might benefit the political left or the right; or it might create something completely new – new alliances, a new generation of politicians, and even a new language of political activism in Israel. This, of course, is our hope.

We might not like everything that has come out of this movement—to be honest, it is difficult even to know who is leading it, and where—yet one thing is clear: Nothing is further from the events we have seen in Israel in the past month than the title Yoav  Fromer chose for his piece. Generation X is the story of young individuals who lost interest in society and could barely communicate with each other. After years of rigid political debate that led nowhere—one that Mr. Fromer urges us to carry on—we think that for the first time, Israelis are searching for ways to speak to one other. Joining the conversation—even from a very critical position, as some of our friends and colleagues have done—is surely more constructive than mocking it from afar.