With at least 60,000 now in the country and 2,000 to 3,000 more coming every month, African refugees, for all the trauma they have been through, are unassimilable in this country. The first in a three-part series.

On Friday, with the headlines screaming of Eritreans raping a 15-year-old Israeli girl,  I went with a photographer friend to the Hatikva neighborhood in South Tel Aviv to get a sense of how the Jewish residents were feeling toward the Africans, and vice versa. I was surprised to see no hatred on the faces of the Israelis nor fear on the faces of the Africans. Everyone looked calm, doing their Friday afternoon shopping, selling and running around.

But this, of course, was just on the surface. An Israeli woman standing outside her front door, in her 30’s, of Yemenite background, asked what we were doing, and when we said we were doing a story about the situation with the Africans, she came down, unasked, and started taking us around the neighborhood. She pointed out the little grocery stalls run by Africans, and complained that they open them without business licenses and nobody stops them. “Can an Israeli do that?” she demanded. “They’re taking over.”

On the walls along Ha’etzel Street were posters for the anti-“infiltrator” protests planned for this Tuesday and Wednesday evening, and for the one that had just taken place. “We are the country – don’t mess with us,” warned one. “Move them to North Tel Aviv,” read another.

The night before, when I read about the terrible attack on the 15-year-old girl near the central bus station, the “capital” of Israel’s foreign worker and African refugee population, I felt “my side” had not only lost, my side had been proven guilty. I felt that as insanely racist, hateful and mendacious as they are, the xenophobes, the Eli Yishais and the Kachniks, had been right on the basic point all along. The refugees have become an intolerable presence in the neighborhoods where they’ve settled, and if something isn’t done to reduce their numbers and stop more of them from coming, this won’t be just a local problem in South Tel Aviv and a handful of other neighborhoods, it’ll be a national problem, an intolerable one.

Starting in 2006, when there were fewer than 200 African refugees in the country, I wrote dozens of op-eds and features in The Jerusalem Post saying Israel has to take in these horribly victimized people, to let them live freely, to allow them the opportunity to work, start families and remain here. 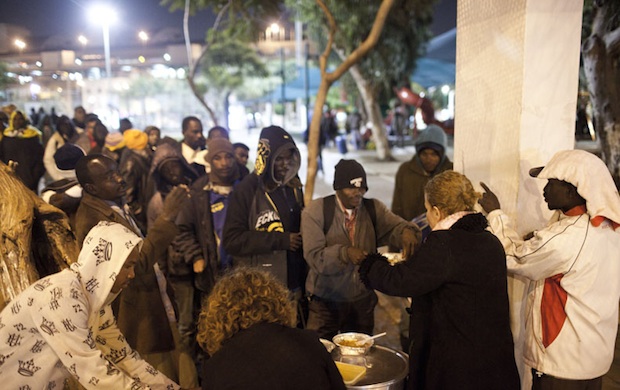 That was when there were a few hundred, then a thousand, then a few thousand, then several thousand refugees – before the complaints from Israelis in South Tel Aviv , Eilat, Arad, Ashdod and Ashkelon began surfacing, when it was possible to write such complaints off as a few people’s irrational reaction to black people. I heard plenty of warnings, and not just from right-wingers, that an open-door policy to the refugees would encourage huge numbers of others to follow, but I didn’t want to take those warnings seriously, and my sense is that pro-refugee activists, lawyers and other journalists didn’t want to take them seriously, either, or they told themselves things would work out.

But those warnings have come true. There are at least 60,000 African refugees, mostly from Eritrea, in the country now. The head of the UN refugee office in Israel, William Tall, told me in late March that 2,000 to 3,000 more are crossing from Sinai into Israel every month – double last year’s rate.

These people come here with heavy, heavy “baggage”: many were robbed and tortured and many women raped by their Bedouin smugglers en route through Sinai to the Israeli border. They’re all escaping unimaginable hell in their home countries, with the Sudanese having been subject to harsh racism and at times violence during their years-long stopover in Egypt.

Some are mentally ill from the ordeal. Some sleep in Levinsky Park near the central bus station. With the refugees now barred en masse from working legally, a Skid Row scene has developed among them. The refugees are overwhelmingly young men, and include very few unattached young women. Most of them live two or three to a room in absurdly cramped apartments.  There’s a lot of drinking and fighting.

The refugees are no longer a relative handful of people whom Israel could assimilate. Their numbers, rate of increase and concentrated presence have turned them into a subculture of pariahs in Israeli eyes, unassimilable anywhere in this country, with nowhere else to go. They’ve settled massively in the midst of poor, mainly Mizrahi, right-wing Jews in South Tel Aviv and Eilat, who are not used to living among black people, who see them hanging around with nothing to do, sometimes drunk, and who typically refer to them as kushim – “niggers.”

The awful rape that came to light on Thursday – three Eritreans were arrested and police say their DNA matches the DNA left on the girl – raises a very hard question: Are the local residents right when they accuse the Africans of habitually committing violent crime, or is it just their fear of young black men, especially young black men at night, that’s talking?

As long-time activist Sigal Rozen wrote, the police statistics used to say the refugees were actually much more law-abiding than Israelis in general; now they say the opposite. Like Rozen, I suspect the police are doctoring the statistics now because that’s the way the political wind is blowing. (In years past, police said they didn’t keep separate crime stats for foreign nationals; now they’ve got separate categories for Eritreans and Sudanese.)

But if you look at the refugee community’s profile, they’re destitute; barred from legal work; traumatized; alien in a fearful, hostile land; with very few families and top-heavy with young men, many of whom drink excessively – it would be something of a sociological miracle if they didn’t show a high rate of crime, including violent crime.

As for rape – again, this is a community with lots of young men and few single women. They come from one of the extremely poor, desolate, war-torn countries of Africa, a continent where sexual violence is a widespread plague.

Add all this up, and what do you get? Not that all African refugees in Israel are criminals or rapists, nor that most of them are, nor that a lot of them are, certainly not if we’re talking about serious violent crime like rape or aggravated assault or murder. No one except a psychotic racist would deny that the overwhelming majority of Africans here are law-abiding.

No, I think the Israelis in South Tel Aviv have more than just a “subjective” reason to be afraid of refugees. On one hand, I have no doubt they exagerrate the danger greatly; I’ve heard loads of generalities from a couple of dozen residents, but no personal experiences of being assaulted by refugees, nor even second-hand accounts. (Again, though, I’ve only talked to a couple dozen people about this.)

On the other hand, I don’t think the people in South Tel Aviv, Eilat, Arad, Ashdod and Ashkelon have made the whole thing up out of nothing but color prejudice; I don’t think the police’s latest statistics are completely made up, either; and if African refugees in Israel have a relatively high rate of violent crime, including sexual violence, I would find it the most natural thing in the world, given where they come from, what they’ve lived through and the way they’re living now.

If there were only thousands of them here, they could be treated strictly as humanitarian cases and “adopted” by kibbutzim and moshavim like many were in the beginning; they could work and go to school and be assimilated and get married and have families and become Israelis. But with at least 60,000 here and 2,000 to 3,000 more arriving monthly, all of them crowding into a few neighborhoods of poor, conservative, frightened Jews, they are a threat to the fabric of this society. Given their numbers, there’s a limit to how much compassion Israel can show them. At this point, we have to worry about our own first.