The Turkel Committee seems to be quietly telling the government, ‘We’ve let it slide, this time, but goddamit, you shouldn’t expect such a miracle next time. Here’s a bunch of recommendations you’d better implement if you want a chance, should you find yourself in front of a real committee.’ 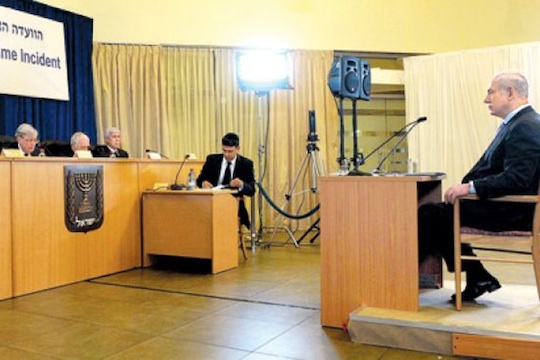 PM Netanyahu testifies in front of the Turkel Commission in 2010 (Photo: GPO)

There’s reason to welcome the second part of the Turkel Committee’s report – you remember the Turkel Committee, the one created to investigate the killing on the Mavi Marmara in May 2010. Well, almost three years after the event, the Committee published the second part of its report, which contains a series of recommendations that human rights NGOs have been demanding for a long time.

Other worthy points include recommendations that Israel will legislate laws relating to war crimes and bring its laws into accordance with international norms; that direct responsibility will be cast on IDF commanders and officials, not only for failing to prevent crimes, but also for failing to do all that is necessary to bring the criminals to justice; that the IDF must report any incident in which there are civilian casualties, and, when necessary, that it is the IDF’s duty to preserve evidence from the alleged crime scene; that not only should incidents with civilian casualties be investigated, but also incidents wherein victims are severely wounded (it should be noted that when the MPCID stopped automatically investigating any killing by the IDF, when the Second Intifada broke out, it moved Israel back to the primitive era before Henry II invented the office of the coroner); that the CMA [Chief Military Advocate]’s decisions now have to be made transparent, and that he must not only explain any decision not to open an investigation, but also be required to make a decision within weeks; that an emphasis should be placed on the need to interrogate not only soldiers but all other witnesses as well (the committee digs an elbow into the MPCID when it demands that it send forces into the West Bank and employ Arab-speaking investigators); and, finally, that the Shin Bet be required to videotape its interrogations.

Basically, the recommendations of the Turkel Committee change the heart of the military justice system. While the defense minister still appoints the CMA, he has to consult a committee of experts before doing so. The Turkel Committee sets the term of service of the CMA at six years and clearly states that this cannot be changed. The report also recommends that the CMA’s rank be determined in advance. The Committee also strengthens the position of the CMP [Chief Military Prosecutor] by codifying the length of his term in office and his rank. All of these are attempts to make the Military Judge Advocate more independent of the military apparatus of which it is part. This sends a not so subtle hint that, until now, the CMA has been exposed to manipulations by military superiors due to his desire to extend his office term or attain a higher rank (which also entails higher pay and benefits).

Aside from the accolades, there are also several disagreements with the Committee’s conclusions. For starters, the Committee’s recommendations, which are in fact a silent yet piercing indictment of the way the military judicial system has been operated so far, are in direct contradiction of its claim that “the apparatus of investigation of complaints and claims about violations of the laws of warfare existing in Israel are, as a rule, in accordance with the obligations of the government of Israel according to the rules of international law.”

Excuse me? You’ve just turned the whole system upside down, the whole way the investigation system has been going on for decades. You’ve separated the operational briefing and the criminal investigation; you’ve fortified the position of the CMA, drawn a moat around it and populated it with crocodiles; you’ve broken the insistent demand of the Shin Bet – which it made for many years – to avoid recording its interrogations, and more. Why did you go to all this trouble? If the apparatus, is “as a rule, in accordance with the obligations of the government of Israel according to the rules of international law,” why was this earthquake necessary? Everything’s fine, no?

It’s hard to avoid the feeling that the Turkel Committee was intended to serve as whitewash following the Marmara debacle, intended to free Israel of its liability to it. The international Palmer Committee found that Israel failed to explain the incidents of deaths on the Marmara, some of which were highly suspicious – which in and of itself says all there is to say about the quality of the famed operational debriefings. The Turkel Committee seems to be quietly telling the government, “We’ve let it slide, this time, but goddamit, you shouldn’t expect such a miracle next time. Here’s a bunch of recommendations you’d better implement if you want a chance, should you find yourself in front of a real committee.”

And now we shall see if the security system indeed implements them. That’s one of the reasons we’re here.